Coronavirus has wrecked global markets in a way comparable to the global financial crisis. Nations are unrolling emergency plans to save their economies. 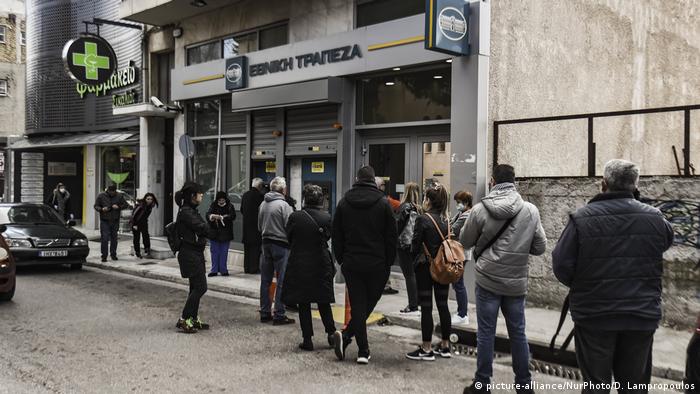 The German government is providing €1 billion ($1.1 billion) in credit for businesses and companies of all sizes. The credit will be delivered through the state-owned KfW business development bank. Last week, Berlin said the KfW has around €500 billion to help support its economy.

The government also announced a number of tax measures to ensure liquidity for companies. Late payment fines for loans may be waved for companies hit hard by the slowdown caused by the outbreak. Financial support will also be given to the Robert Koch Institute, the country's public health institute.

Germany's Ministry for Education and Research is expected to receive €145 million for the development of a vaccine. The country has also set aside €50 million to repatriate German tourists stranded around the world.

The southern state of Bavaria announced a fund worth up to €10 billion to help the region withstand the coronavirus. The fund allows the local government to buy stakes in faltering companies to prevent insolvencies.

Companies with up to 250 employees can apply for loans between €5,000 and €30,000. The fund will also be used to guarantee 80% of loans taken by companies threatened by default. Bavaria is home to nine blue-chip DAX-30 companies including car manufacturer BMW, engineering giant Siemens and sports retailer Adidas.

German Finance Minister Olaf Scholz told the newspaper Die Zeit that European countries must show "solidarity" with hard-hit countries like Italy.  "A country like Italy must now spend billions to support its economy. This must not be allowed to fail due to a narrow interpretation of regulations."

How COVID-19 triggers our herd instinct

The Spanish government plans to mobilize €117 billion for the package, with private companies providing the rest. Some €600 million will be pumped into basic social services.

Half of the assistance measures, which are worth 20% of Spain's economic output, are state-backed credit guarantees for companies, and the rest includes loans and aid for vulnerable people.

Portugal, which declared a 15-day state of emergency starting on March 18, has unveiled a €9.2 billion ($10 billion) aid stimulus package, worth more than 4% of the country's GDP.

The package includes state-backed credit worth €3 billion to help companies in sectors like tourism, hospitality, textiles, wood, micro and small enterprises. Some €5 billion of the fiscal stimulus is set aside to enable flexible tax and social security payment.

Portugal's finance minister said that the country may implement a moratorium on loan repayment. Talks are currently underway with several banks.

France has pledged a €45 billion ($50 billion) aid package for small businesses in addition to tens of billions already promised for French workers forced to stop working because of shop and restaurant closures and strict new quarantine measures.

The stimulus will support the UK's National Health Service (NHS) and refund the cost of businesses for 2 weeks. The UK is also offering state-backed loans worth $400 billion (15% of the UK's GDP) for businesses in the retail and hospitality industries struggling in the sudden economic paralysis caused by mass self-quarantine.

The US Senate cleared a federal aid package worth $104 billion, which will give free coronavirus testing to people without health insurance, school meals for children, 10 days of sick leave and 12 weeks of paid family leave for certain workers.

US President Donald Trump's administration is currently in talks with lawmakers about another stimulus package worth as much as 1 trillion dollars (€900 billion). The proposed package includes an immediate cash payment to lower-income Americans.

The measures would include a tax cut for wage-earners, $50 billion for the airline industry and $250 billion for small businesses. Senator Mitt Romney also proposed $1,000 in payouts for ordinary US citizens. The enactment of the financial package must wait for Congress to agree on it.

The US Federal Reserve announced three new finance mechanisms to combat economic damage. The first is to help households and businesses stay afloat and the second funds major financial institutions for up to 90 days.

The new mechanism will allow companies including JP Morgan, Goldman Sachs, HSBC, Morgan Stanley, Deutsche Bank Securities, BNP Paribas Securities and Nomura Securities to use debt holdings as collateral for credit from the Federal Reserve. The program will be in place for at least six months.

The third mechanism, the $10 billion Money Market Mutual Fund Liquidity Facility, will create an emergency lending facility for banks that purchase assets from mutual funds and other short-term credit sources. This measure is expected to keep credit flowing in the US economy.

Canada's Prime Minister, Justin Trudeau unveiled an aid stimulus package worth $82 billion Canadian (US $56.4 billion; €51.4 billion). The package will be used to support businesses and provide temporary tax relief. The package is worth 3% of Canada's GDP.

The stimulus package will also support child benefit payments and provide emergency care to workers who don't have access to paid sick leave.

Trudeau also announced that Canada would restrict all non-essential travel from the US. He assured that supply chains would not be affected by the move.

Australia has announced a fiscal stimulus package worth $11 billion to tackle the coronavirus pandemic. The package includes a one-off payment of AUD $750 ($451) for nearly 6.5 million lower-income Australians.

In addition, the package will be used to save 120,000 apprentice jobs and support small and medium-sized firms. The fiscal stimulus package is nearly one % of Australia's GDP.

Australia's central bank has slashed its interest rate to a record low of 0.25%, to boost fiscal stimulus in an embattled Australian economy. The Australian government also said that it would enable cheaper borrowing for businesses by intervening in the bond market.

Turkey said that it would roll out a stimulus package worth $15.4 billion to tackle the coronavirus pandemic. The 21-point package, known as the Economic Stability Shield, will support delay in loan and tax payments.

Turkish President Recep Tayyip Erdogan also announced that Turkey is putting in place a "periodic program" to give healthcare at home for people above the age of 80 who live alone.

US President Donald Trump said the nation's economy "may be" heading into recession hours after the US Chamber of Commerce warned that the impact of the pandemic could be devastating. The group urged a tax break. (16.03.2020)

Most European leagues have stopped play because of COVID-19. Handballers, ice hockey players and now footballers have entered into an indefinite break in Germany. What does this mean economically? (14.03.2020)

The state-run oil giant posted a full-year profit of $88.12 billion due to lower crude oil prices and production volumes. The results are well below expectations and come just three months after its record-setting IPO. (15.03.2020)

Made in Germany - A stricken economy - Is globalization to blame?