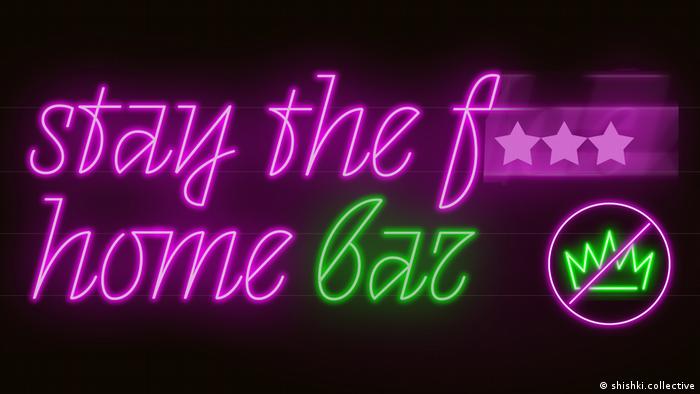 Pour yourself a drink. Enter your name. Activate video on your device — and join. Just a few clicks get you a seat in the StayTheF***Home Bar. Or scroll your way down the street to try what its creators are calling "digital bar-hopping" in one of the other 14 bars. Each bar on the website is hosted on the video conferencing software Whereby, so you can talk to people just like on Zoom or Skype, in individual chatrooms.

Going in feels a bit intimidating, like going into a bar on your own. And like in a real bar, the atmosphere depends on the people in the room. Except here, you can't hide in the corner with your drink: 11 faces are almost inevitably looking back at you and usually welcoming you in.

Sitting in my bedroom about a week into self-isolation, I had a beer in the "Art and Design Bar" and then headed down the road to the English-speaking bar. The first bar was Russian-speaking. Punters from Russia, Ukraine, Belarus and Estonia raised their glasses to their webcams in between discussions about the coronavirus, the collapsing tourism industry and the inevitable economic fallout of the pandemic.

In the English-speaking bar, the mood was less glum. One woman had a suggestion that the users from Finland, Spain, Lithuania and Russia welcomed with a smile: "Let's try not to talk about the coronavirus," she said. "What should we drink to?" asked one face on the screen. "To good health of course!" replied another.

"While borders are closing, we are welcoming everyone from everywhere," the website for the online bar project proclaims. It was launched just over two weeks ago by the Russian creative agency Shishki Collective to help people "who feel lonely and abandoned" get through quarantine measures and to raise awareness for staying home to slow the spread of the pandemic.

I meet Mihkail Shishkin, the creative director and founder of the agency behind the online bar in a private chatroom off the virtual main street. He has named the room "soundofsilence" and says it's a bit like a "speakeasy," where you can enter by invitation only. Shishkin says the online bar started as a side project the agency came up with on a Saturday and put together within 24 hours. "Initially it was just for fun, a place where we could just meet with friends," he says. But word spread quickly.

All the world's a bar

Now the site has had 200,000 visitors in just two weeks, with up to 30,000 people visiting in a day, according to the agency. Though the bar is an inclusive project, Shishkin says most of the people who go are between 25 and 40, and around 80 percent are Russian-speaking. Friday and Saturday nights are the most popular. 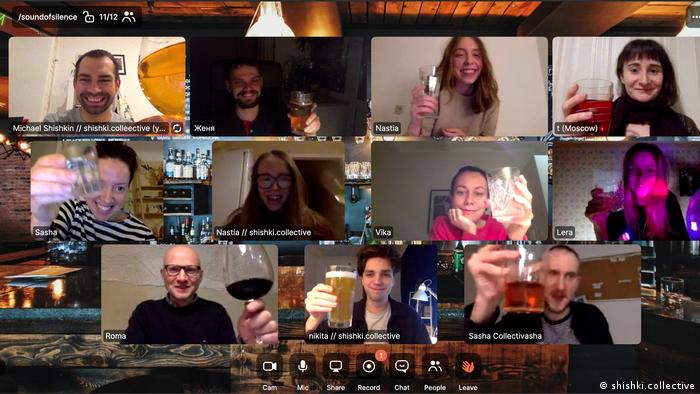 There are currently 200 "seats" in the bars, with more rooms opening daily. One is for lectures. On Friday, the StayTheF***Home (STFH) Bar launched a cultural program, which will include live stand-up comedy, concerts and a cinema club. And some of the names on the street could sound familiar: Three online versions of popular St. Petersburg bars, one Moscow bar and one Tel Aviv bar are already open.  The agency is apparently in talks with a bar based in the Japanese city of Osaka and one in San Francisco in the US. The bars have gotten in touch themselves. Rather than recreating a street in St. Petersburg the agency hopes to create "a long, worldwide street, where you can hop between bars that are physically located all over the world — and meet people from all over the world there."

Shishkin says the platform is hoping to support the bars in "these tough times," by allowing them to create a space to stay in touch with their regular customers. The Shishki Collective is experimenting with ways for bars and restaurants to monetize the platform. That could mean creating events or it could be a delivery scheme: One idea is to create takeaway cocktail kits to mix at home.

Locking up, locking down

Around the world, many countries have closed their borders to stop the spread of the coronavirus, and many have introduced quarantine or self-isolation. Russia is tightening its measures as the number of infections begins to surge.

On Wednesday, in his first address to the nation since the coronavirus pandemic began, Russian President Vladimir Putin gave the country a week of paid holiday, urging people to stay home. Following the announcement, Moscow placed the capital's inhabitants in self-isolation. More and more regions and cities are following the capital's lead. The country also recently closed nightclubs, bars, restaurants and movie theaters. 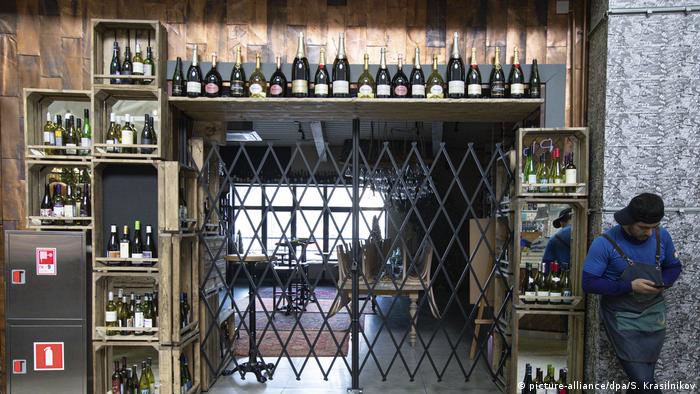 Bars and cafés are shut across Russia now

"The coronavirus is fundamentally changing our social structures, though we may not even be fully aware to what extent yet," says sociologist Olga Savinskaya from Moscow's Higher School of Economics. "For many people it's extremely uncomfortable. Because social structures are our everyday habits. And now we have to completely change them," she says. "People are being forced by the circumstances to find new ways to have fun."

That's where the StayTheF***Home Bar comes in. Shishkin says that it's too early to tell how much extra traffic the Russian government's new policies will create for the platform. But as bars close, Shishkin is convinced that the online project can replace the real thing. Some people just pop in and "some people stay until 6 a.m.," he says. "One guy even fell asleep in one of the bars, and we found him on the sofa in the morning. People in the bar were whispering to avoid waking him up." 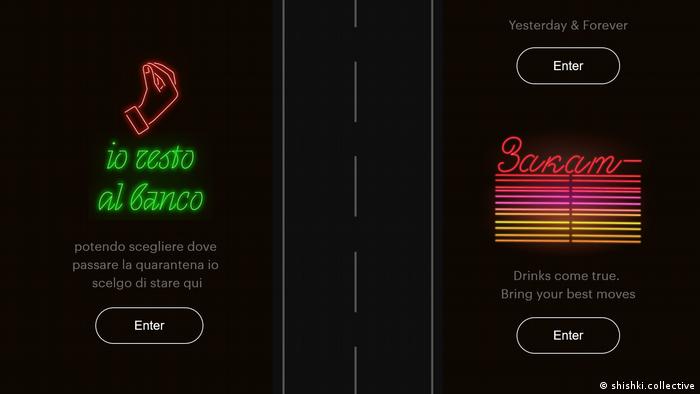 "Drinks come true," according to the makers of STFH Bar

Not all the bar's visitors are quite as convinced. "It's not necessarily a bar," says Arthur Ahiyarov from the Russian city of Ufa.  "People just go there to talk. A lot of people don't even drink," the 24-year-old English teacher says. Ahiyarov admits he has been to the online bar almost every day since he discovered it, drawn back by the "colorful" people and despite occasional technical difficulties with people's microphones or internet connections. "But do I think it can be a replacement for spending time face to face? No."

Hendrik Jackson, a German writer and translator currently based in Moscow for a lectureship, says the bar was "quite pleasant" when he was self-isolating after a trip to Austria. The 48-year old says he went to the STFH Bar a few times but wouldn't go back.  Now that the bar is more popular, people come and go more, making the experience "too loud and too superficial."

"The problem is everyone is listening. So that makes it different from [an offline] bar," Jackson explains.

There is a link for donations at the bottom of the STFH Bar page, but at the moment those are going toward keeping the platform's accounts on Whereby running — and to paying volunteers who are part of an expanding team. "For us this is a huge platform for experiments," Shiskin says.

The creators hope the project can keep real bars alive so they can eventually reopen in real life. "We will be happy if this all ends, our bars become totally empty and offline cafes, bars and restaurants fill up. If that is how it ends, we will be glad to have helped people and gained interesting experience."

Cheers to that, I guess.