China has reported thousands more cases of the coronavirus. More than 40,000 infections have been confirmed globally. Workers there are, however, starting to return to offices and factories. 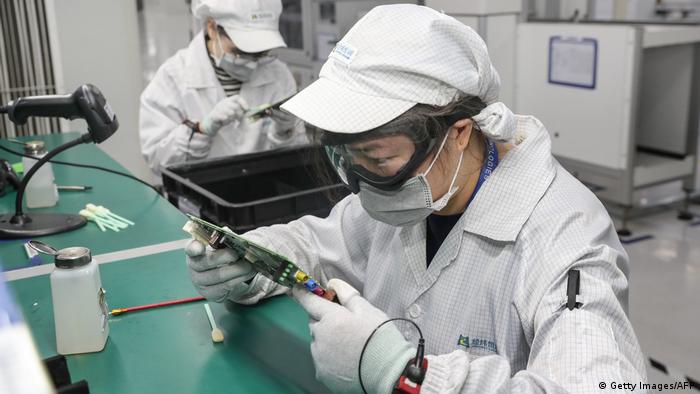 A rise in new coronavirus cases on Monday broke a recent series of declines, crushing optimism that control measures in isolated major Chinese cities are being effective.

China reported another 3,062 cases over the 24 hours throughout midnight Sunday — up 15% from Saturday. The coronavirus death count now stands at 909, surpassing the 774 deaths seen during the SARS outbreak in China in 2002-2003. One American and one Japanese citizen succumbed to the disease over the weekend, marking the first non-Chinese fatalities linked to the virus.

More than 40,000 cases of coronavirus have been confirmed globally as of Monday.

Chinese go back to work

Workers began going back to factories and offices Monday as the Chinese government eased some restrictions on working during the coronavirus outbreak. However, many workplaces remain closed and a number of white-collar workers will continue to work from home.

Meanwhile, a team of international experts from the World Health Organization (WHO) has departed for Beijing to investigate the coronavirus outbreak, the UN health agency announced.

The death toll of 97 on Sunday was the highest in a single day since the outbreak was detected in December.

New cases in UK and Spain

The British government declared on Monday that the coronavirus posed a "serious and imminent threat to public health," and introduced emergency powers including forcible quarantine.

The total number of infections had doubled to eight on Monday. The four new coronavirus cases are all "known contacts of a previously confirmed UK case, and the virus was passed on in France," Chief Medical Officer Chris Whitty said.

Arrowe Park Hospital near Liverpool, and the Kents Hill Park conference center in in Milton Keynes have been designated "isolation" facilities. The British government labelled China's Hubei province as an "infected area."

Health Secretary Matt Hancock has made regulations "to ensure that the public are protected as far as possible from the transmission of the virus," the health ministry said in a statement.

"Our infection control procedures are world-leading and the NHS [National Health Service] is well prepared to deal with novel coronavirus,'' the agency said. "This measure will rightly make it easier for health professionals to help keep people safe across the country."

On Sunday, Spain announced its second confirmed case. Officials said both new infections were acquired while the parties were in the French Alps. They are believed to have come into contact with the British tourist who became infected during a trip to Singapore last month.

The European Union commissioner for crisis management Janez Lenarcic said the coronavirus was spreading rapidly, posing a "serious danger for public health." Lenarcic said the virus would be discussed Thursday at an emergency meeting with health ministers from the bloc, adding that the EU would continue to help China curtail the epidemic.

The EU commission has administered 10 million euros ($10.9 million) for research into the new coronavirus.

The second and last plane to return British nationals from Wuhan, the center of the virus outbreak, arrived in southern England on Sunday. More than 200 people were on the flight, including 20 German citizens. They were taken to Berlin, where they'll be quarantined for 14 days.

Another 17 evacuees were flown on to Luxembourg, the Netherlands, Austria and Romania on special flights. Thirty-five French citizens on the British flight were taken to southern France and immediately placed under quarantine.

Cruise ships remain stranded in the ports off coastal cities. Hong Kong on Sunday allowed 3,600 people aboard the World Dream cruise ship to disembark after all 1,800 crew tested negative for the infection.

Meanwhile, the Diamond Princess cruise ship entered its fifth day of quarantine in the Japanese port of Yokohama.

Japan's Health Ministry reported Monday that about 65 more people on board the cruise have been infected with the coronavirus. The ship now has 135 confirmed cases of coronavirus.

Among the new 65 cases are 45 Japanese and 11 Americans, Japan's health ministry said.

The vessel carries around 3,711 passengers and crew members in total from more than 50 countries.

Health Minister Katsunobu Kato said the Japanese government was considering testing all people aboard the Diamond Princess, which would require them to stay on the ship until results are available. Health authorities are racing against time to deliver medicine to more than 600 passengers.

"We are doing the utmost to keep everyone in good health," Kato said.

Those aboard will not be allowed to disembark until February 19 at the earliest.

The Singapore Airshow scheduled for Sunday has insisted that the show— the largest aerospace event in Asia — must go on, despite 70 exhibitors pulling out over coronavirus fears, including US aerospace giant Lockheed Martin.

Coronavirus: What is it like on Japan's quarantined cruise ship?

The Diamond Princess cruise ship has been quarantined in Japan's Yokohama harbor for a week, and the number of coronavirus cases on board has risen. DW spoke to a woman stuck on the ship. (10.02.2020)

The chaos caused by the deadly coronavirus outbreak has already resulted in a host of sporting events being canceled or rescheduled in China. Now the wider sporting community are starting to feel the effects. (10.02.2020)