Why coronavirus fears are disproportionate compared with other health risks | Science | In-depth reporting on science and technology | DW | 07.02.2020

Why coronavirus fears are disproportionate compared with other health risks

Comparing the new coronavirus with other viruses shows that panic, especially outside of Wuhan, China, is out of place. The current agitation has more to do with novelty and media attention than with real danger. 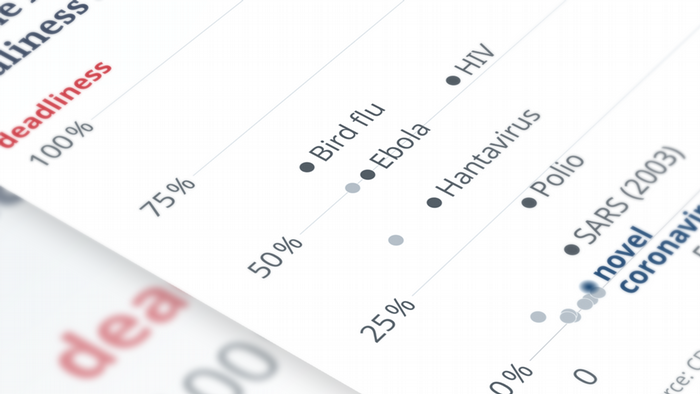 The figures in this article reflect the situation on 24.02.2020. Find all information on the current developments here.

The novel coronavirus SARS-CoV-2 has dominated the news cycle since cases started accumulating in Wuhan, China, at the start of the year. Millions of people are under lockdown; the international response has been swift. Somehow blamed for the outbreak or accused of carrying the virus themselves, people from East Asia or of East Asian descent have faced racism and exclusion from public spaces in countries around the world.

The figures do look scary: There have been more than 79,000 confirmed cases and more than 2620 deaths (33 of them outside mainland China) so far. "These are still early days," said Jonathan Ball, a professor of molecular virology at the University of Nottingham. In previous epidemics, case numbers have also risen sharply at first, but peaked and eventually declined once containment measures were in place and more information about the pathogens became available.

In a statement on January 30, the World Health Organization (WHO) commended the measures taken by China and expressed optimism that it would be possible to interrupt the virus's spread.

The public attention on outbreaks such as that of the coronavirus is often wildly disproportionate when compared with maladies that are more common — and therefore more dangerous to more people. For example, in 2010 there were 684 million cases of norovirus, of which more than 200,000 people died. Dengue fever annually infects up to 100 million people and killed more than 40,000 in 2017. Even the seasonal flu, which can often be vaccinated against in many parts of the world, kills 300,000 to 650,000 people every year. It is not possible yet to estimate how many cases of the new coronavirus there will be by the end of this year, but they are highly unlikely to reach these dimensions.

Case numbers have increased in the time since February 24. They are still orders of magnitude below the most common viruses pictured here. There are, as of now, no reliable projections on how many cases there might be by the end of the year. We will continue to monitor the situation and make adjustments if necessary.

Ongoing public health threats don't receive nearly the same amount of coverage that new pandemics do. That's because this coronavirus is new, said Mirjam Jenny, a risk literacy researcher at the Harding Center for Risk Literacy at Potsdam University. "New things are often especially scary. We have gotten used to people getting sick and dying every year due to the flu, but the coronavirus is unfamiliar, so people have not experienced it yet and never had to deal with this specific uncertainty."

Risk from coronavirus is relatively low

Jenny said it would help to put the large numbers into perspective — to compare them with, for example, other diseases or the risks associated with smoking or driving, risks many people voluntarily take every day.

In addition, many people who catch the coronavirus might not even notice: In the majority of cases, the virus has only caused a cough, like a light cold would.
It is estimated that about 2% of people who have caught the coronavirus have died from it, and that they generally come from already-vulnerable groups such as older people or people with other severe illnesses. For comparison, almost half of the people infected with Ebola died in the 2014-2016 outbreak. About half of the people infected with HIV — more than 1 million per year — die, often because of a lack of access to treatment

The death rate is also likely to be overestimated at the moment. Researchers and workers on the ground note that the majority of coronavirus cases aren't even recorded, since only those cases who go to a doctor or hospital end up in the statistics — which also means that many of them probably progress mildly. As more of those cases are discovered, case numbers might rise, but the estimated death rate would fall.

The deadliness of a virus is an important part of its profile for researchers, along with its contagiousness. The new coronavirus is estimated to have a base reproduction rate of around 2.5, meaning that each infected person is likely to infect two to three people. That makes it about as contagious as Ebola (but much less deadly), and a lot less contagious than, for example, the measles: One person with measles is likely to infect nine other people.

The viruses shown are transmitted differently: from human to human or from animal to human. The contagiousness is measured by how many new infections are produced by each infected individual – animal or human.

The risks from the novel coronavirus, especially outside of its epicenter, are low compared with the risks of other diseases. That is sometimes hard to square with the terms "pandemic" and "public health emergency," which institutions such as the WHO use. But these often have to do with the mobilization of resources, Jenny said: "For example, the European Commission has just announced a tender to spontaneously fund research on the coronavirus. This process normally takes much longer."

The declaration of a public health emergency grants the WHO access to funds that are restricted for use only during emergencies and allows the organization take additional measures. This is needed to stop the virus from spreading and to support impoverished nations in which the public health infrastructures are not prepared to handle such situations.
So, while public panic is not necessary, the decisive action that is being taken by public health institutions is.

For three months, Covid-19 has been keeping the world in suspense. It's hard to keep track of all the different figures and the technical terms. What do they mean and why are they helpful? (20.03.2020)

Data, code and methodology behind this analysis