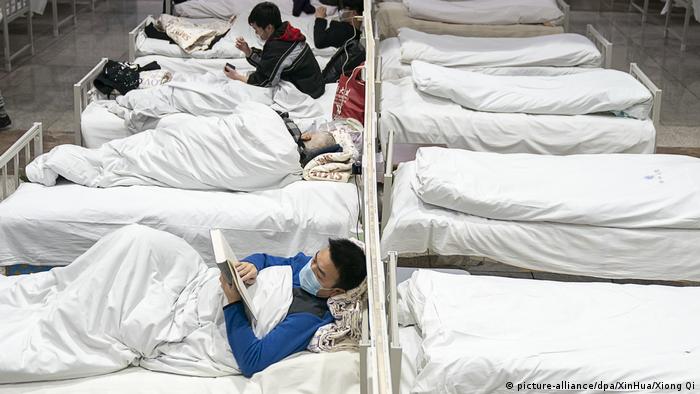 - The number of confirmed coronavirus deaths in mainland China has risen to 563, with the majority in central Hubei province, where the illness was first detected.

- It is too soon to say whether the outbreak has reached its zenith, WHO officials said.

- Hong Kong and the Philippines have each reported one death.

- The new virus has infected more than 28,200 people globally.

Below are Thursday's main developments.

23:11 The Chinese media has reported 69 fresh deaths on Thursday in all, putting the death count at 618. The youngest patient has been identified as a newborn in Wuhan who was diagnosed 36 hours after birth. It was not immediately clear how the baby was infected.

20:50 A Chinese doctor reprimanded by police for "spreading rumors" about the coronavirus in December died of the illness on Friday (local time) in China, The Wuhan Central Hospital said.

Li Wenliang, a 34-year-old ophthalmologist, was "unfortunately infected during the fight against the pneumonia epidemic of the new coronavirus infection," the hospital added. "We deeply regret and mourn this."

Li sounded an early warning about the virus that has now spread around the world.

15:30 The World Health Organization announced it is still too soon to say if the coronavirus outbreak is peaking. The UN's health organization, however, added that Wednesday was the first day that the overall number of new cases in China dropped.

"There has been a constant increase in cases in China's Hubei province, but we haven't seen that same acceleration in provinces outside Hubei," WHO spokesperson Mike Ryan said.

14:50 China finished building a second new hospital on Thursday to isolate and treat patients of the coronavirus. An initial group of patients was expected to start testing a new antiviral drug. Hospitals in central Wuhan have been overwhelmed with the number of patients.

14:25 Germany's State Office for Health and Food Safety announced that a German coronavirus patient on the Spanish island of La Gomera hails from Bavaria and had contact with an employee from the company Webasto, where many of the first cases in Germany originated following a visit from a Chinese trainer.

14:05 Across Germany there are now 13 confirmed cases of the coronavirus, according to the Bavarian Ministry of Health.  The ministry reported Thursday that a woman has been found with the virus in Bavaria. She is married to another patient who has the virus and their two children were infected as well. According to doctors, the children and mother are symptom-free. The father's health condition is reported to be stable.

The 13 people with the virus in Germany are among the 30 in Europe known to be infected.

13:40 A third person in the United Kingdom has tested positive for coronavirus. The patient is being transferred to a specialist health service center. Chief Medical Officer Chris Whitty said the person acquired the coronavirus in Asia but not in China, warning doctors to be vigilant to those showing symptoms from a wider range of countries.

11:15 A number of international trade fairs and events in China and elsewhere have been postponed due to the spread of the virus and the knock-on effects for travel. They include the Singapore Airshow, the Canton Fair and the Taipei Book exhibition.

10:20 Kazakhstan has halted all postal deliveries to and from China. Kazpost said it did so at China's request. The move may hurt the e-commerce business of companies such as Alibaba and will also affect Kazakhstan's mail exchange with a host of countries in Southeast Asia.

10:00 Air France has become the latest airline to suspend all flights to China. It does not plan to resume trips until March 15. The French national carrier on Thursday joined a host of international rivals such as American Airlines, British Airways and KLM in implementing a freeze on flights.

09:30 The World Health Organization will hold a summit next week on Tuesday and Wednesday in Geneva. World-leading experts on coronaviruses intend to exchange expertise on possible sources of the virus and how it is spread, in addition to information on creating a future vaccine. Health experts will also exchange information on developing a faster diagnosis method.

08:45 Plans for further evacuations are announced with Singapore said to be preparing a second evacuation flight. This could take place as soon as Friday, according to officials speaking to Reuters news agency. The city-state evacuated 92 Singaporeans from Wuhan a week ago. Central Asian country Tajikistan said it also plans to evacuate 58 people from Wuhan, where the outbreak first emerged, according to the head of the nation's emergency response committee.

08:14  Saudi Arabia barred its citizens and residents of the kingdom from traveling to China amid the new virus outbreak.   The kingdom's General Directorate of Passports said anyone who violates the ban would not be allowed to return to Saudi Arabia. Further regulatory provisions on documents would be applied to citizens who violate the ban, without further specifying which measures these would be.

07:30 As cases in China continue to increase, the country's leadership is coming under scrutiny for its response. DW's Beijing correspondent has this report on authorities accused of covering up the outbreak when it first emerged.

06:40 Here is a recap of significant coronavirus figures and developments over the past 24 hours:

The death toll has risen to 563. China's National Health Commission said another 3,694 coronavirus cases were reported throughout the country on February 5, bringing the total infected to 28,018.

Two cruise ships were quarantined, one off the coast of Hong Kong and Japan. There have been 20 confirmed coronavirus cases on the ship in the port of Yokohoma, south of Tokyo. Over 1,800 passengers quarantined on the World Dream ship, stationed in a Hong Kong port, are being tested for the virus.

The aviation industry took a hit, with Cathay Pacific announcing on Wednesday a three-week unpaid leave for 27,000 workers and Airbus halting production at its plant in Tianjin.

Doctors at Wuhan Children's Hospital said that the virus has shown that it may be able to be transmitted vertically after a newborn baby was confirmed to have the virus just 30 hours after it was born, from a mother who was suffering from the virus.

Carrie Lam, Hong Kong's chief executive, announced that anyone traveling from mainland China would be subject to compulsory 14 days quarantine.

05:30 The coronavirus has infected more than 28,000 people in mainland China and has spread to more than 20 countries. The novel coronavirus affects the lower respiratory tract, and most of those infected exhibit a dry cough, shortness of breath or pneumonia, but not a sore throat.

04:38 The coronavirus has been impacting business with Adidas, McDonalds and Starbucks closing stores across China. On Thursday, tech giant Foxconn announced that workers at its plant in central China will now be quarantined for up to two weeks. The company, officially called Hon Hai Precision Industry, is the world's biggest contract electronics maker and assembles Apple's iPhones.

04:16 Uzbekistan evacuated 251 people from China in wake of the virus, according to its flag carrier airline Uzbekistan Airways. The passengers have been subsequently quarantined upon arrival in the Central Asian nation's capital, Tashkent, the airline added.

03:31 The passengers aboard two evacuation flights from Wuhan, the city at the heart of the coronavirus outbreak, to California were placed under quarantine upon arrival at military bases, US officials said. The roughly 350 American citizens will remain there for two weeks.

The move comes a day after the US confirmed the total number of infections had risen to 12, none of them fatal.

03:20 People traveling from China have been hit by coronavirus travel bans implemented by countries including the US, Israel, Australia and New Zealand. Anecdotal reports suggest that the stigma associated with the virus has led to an uptick in racism and xenophobia against Chinese people in Europe and the US.

02:59 The death toll in mainland China now stands at 563, with 28,018 people with confirmed infections, Chinese health authorities said. There have been 73 new fatalities over the last 24 hours.

02:51  An update on the global figures related to the virus shows Japan as having the most infection cases outside of China, primarily due to the 20 positive tests emerging from the cruise ship in the port of Yokohama. Japan has reported 45 infections so far, with that number expected to increase significantly as the screening of passengers continues.

Singapore has so far documented 28 cases, Thailand 25 and South Korea 23. The number of infections in Germany has held stable in recent days, with 12 cases currently confirmed.

02:36 A ship in Hong Kong is having its roughly 3,600 passengers screened after three people on board a previous voyage were diagnosed with the coronavirus. The territory's leader, Carrie Lam, who has recently struggled to deal with opposition protests, announced that two terminals, including one where the cruise ship is currently quarantined, will be shut down for the foreseeable future.

02:29 China's ambassador to France has described the decision by Hong Kong medical workers to strike at this time as "shameful."

Hundreds of medical staff in Hong Kong walked off the job earlier this week, demanding that the semi-autonomous territory completely close off its border with mainland China to stop the spread of the coronavirus. On Monday, Hong Kong had closed all but two of its land crossings.

Ambassador Lu Shaye told a press conference in Paris: "At a time when everyone is throwing themselves into the fight against the epidemic, and a few cases have already been confirmed (in Hong Kong), it's not fair."

02:13 Ten more people on a cruise ship in Yokohama Port, on Japan's east coast, have tested positive for the new coronavirus, according to Japanese Health Minister Katsunobu Kato. This raised the total number of confirmed cases on the vessel to 20.

The ship, the Diamond Princess, had 3,700 people onboard and crew from over 50 countries. So far only 273 passengers have been tested. The passengers remain quarantined aboard the boat. Testing began after a previous passenger from Hong Kong was confirmed to have the virus. 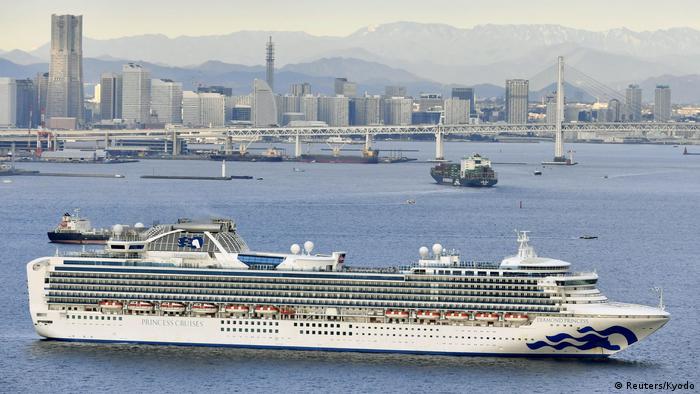 Cruise ship the Diamond Princess anchored off the Yokohama Port, near Tokyo

The German military recently flew back over 100 people from the epicenter of the coronavirus outbreak — with two people on board testing positive for the virus. DW spoke with one of the evacuees about life in quarantine. (03.02.2020)