Coronavirus: Living in lockdown in Germany′s Verl | Germany | News and in-depth reporting from Berlin and beyond | DW | 30.06.2020

A coronavirus outbreak at a meat-processing plant of the company Tönnies has triggered a lockdown in two regions in Germany. Miodrag Soric reports for DW from Verl in the western state of North Rhine-Westphalia.

"Did you bring your ID cards, and are you in a good mood?" the cheerful soldier asks a young family of three who want to get tested for the coronavirus. They've come to a temporary testing facility in Verl, a city of 25,000 in northwestern Germany.

The facility was set up by the Bundeswehr in a school shut down for the summer holidays, following a major coronavirus outbreak at a nearby slaughterhouse. Tests are paid for by the German state in conjunction with meat producer Tönnies, which carries responsibility for the outbreak at its meat-processing plant.

The family members have their IDs, but their good mood is missing. They need to prove they didn't contract the virus so they can go on holiday. Not all parts of Germany welcome holiday guests from the Verl region, because it has seen such a dramatic spike in infections. 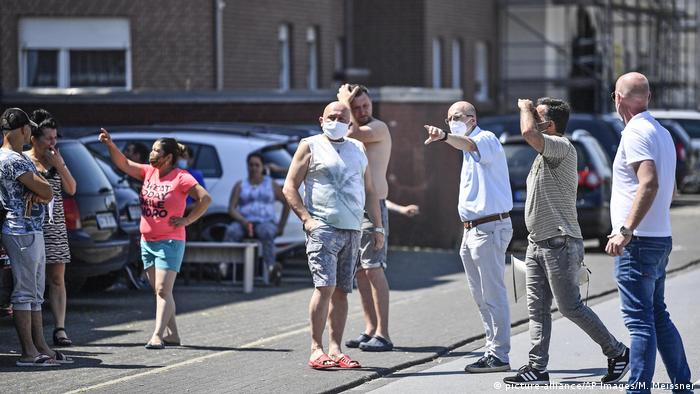 The mayor of Verl, Michael Esken, who belongs to the conservative Christian Democrats (CDU), thinks this is unfair. "We have barely any infections apart from the people who work for Tönnies," he says.

But these predominantly Romanian and Bulgarian workers, who tend to live in prefab homes on the edge of the city, are often neighbors to laborers employed by other regional companies and to long-time residents of the city.

Life behind a quarantine fence

A concrete apartment block on Verl's outskirts is typical in this regard. It is home to about 650 residents overall. Almost half of them are Romanians, who work in the Tönnies meat-processing plant. They have been placed under quarantine. Some 60 have tested positive for coronavirus.

The building is surrounded by a 2-meter-high (6.5-foot-high) fence, with police and security offices patrolling the perimeter. A doctor is on call in a nearby portable hut. Translators are there to ensure that the factory workers and state officials can communicate with each other. Most of the Romanian workers who live here speak little to no German.

Those who have fallen ill have been moved to the rear part of the estate. It is surrounded by yet another fence, intended to prevent further infections. This is a "quarantine zone within a quarantine," as Esken calls it.

He has set up a task force consisting of local law enforcement officers, police and aid agencies to prevent further outbreaks. Only if they succeed will North Rhine-Westphalian state premier Armin Laschet lift the local lockdown in a week, or maybe two.

Progress is being made, however. Already, some residents are being allowed to leave the quarantine — provided they have tested negative for the virus, and don't work for Tönnies. All the residents in neighboring buildings have been tested, too.

Yet they need to be patient, as it takes a while for test results to come back. Mayor Esken is under no illusions about how long it will take to get back to normalcy. "It could take months until we're back to pre-coronavirus conditions," he says. Maybe even longer, depending on when a vaccine will be available, he says. 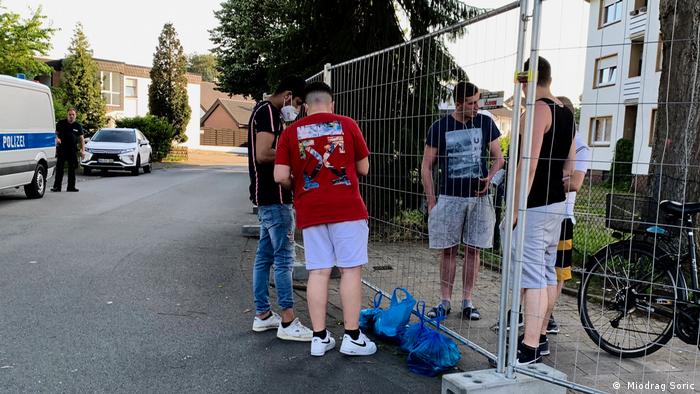 Despite some residents slowly winning back freedoms, many are still stuck in lockdown

Susanne Grund, who runs a restaurant with her Croatian husband, is relieved the state gave them €9,000 ($10,100) in emergency funding to get though these tough times. Their landlord has temporarily waived their rent, too. "All that helps a lot," the jovial restaurateur says.

But if a second wave of infections sweeps the country in the fall, it could force them to close their eatery, she says. It's a daunting prospect. The restaurant has secured the family's livelihood for over 30 years. About two-thirds of Verl's cafes and restaurants are currently shut. Many locals don't want to eat and drink out, fearing they could catch the virus.

Clemens Tönnies is the person most locals blame for this dire situation. Tönnies, who owns the meat-processing company that bears his name, is known to have forced workers to suffer the dismal working conditions that precipitated the virus outbreak. But many locals also take issue with the sluggish response of lawmakers. They say politicians should have ordered checks on the company much sooner.

Everyone in Verl hopes the crisis will be over soon. But the mood in the city is darkened by the knowledge that for now, they must keep living with the virus.

Residents of Beijing have been panic buying food with heightened fears of a Shanghai-style lockdown. Germany's vaccine council has been asked to look into a second booster ahead of autumn. DW has the latest.

China's commercial capital reported no new infections outside quarantine areas, fanning hopes that the tide is turning in its pandemic battle. Follow DW for the latest.