Consumer confidence in Germany has slumped as the country's tough lockdown measures continue to bite. Most of those surveyed were gloomy about the near future. 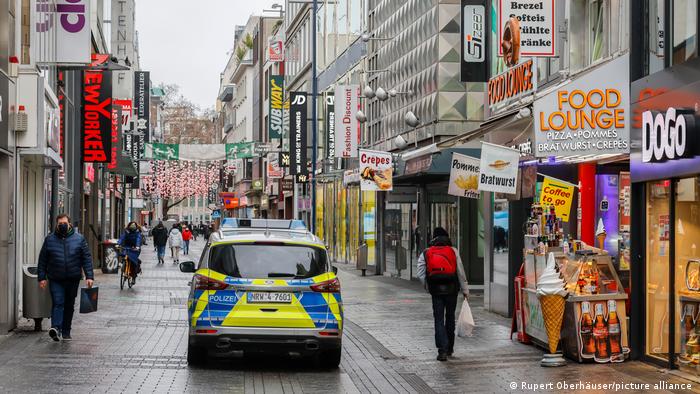 Germany's extended lockdown and rising job fears are sapping consumer confidence as the country heads into February, a report published on Wednesday shows.

The forward-looking survey from market research institute GfK saw confidence plunge to minus 15.6 points, compared with a January level of 7.5 points.

The decline was the fourth monthly drop in confidence as Europe's largest economy struggles to get to grips with a second wave of COVID-19 cases, despite strict restrictions.

"The closure of restaurants and, in mid-December 2020, large parts of the retail sector has hit consumer sentiment as similarly hard as it did during the first lockdown in the spring of last year," said GfK consumer researcher Rolf Bürkl, who added that there would be tough times ahead in the first quarter of 2021.

"For a sustained recovery, it is necessary that the infection figures fall more sharply than they have so far, so that measures can be noticeably eased. The recovery that many are hoping for this year will still be some time coming."

The German government brought in renewed restrictions in November, shuttering restaurants, hotels, culture and leisure centers. It closed schools and non-essential shops in December, and last week extended the measures until February 14.

Pessimistic about the future

The survey of about 2,000 people found that consumers were more pessimistic about Germany's economic prospects, as well as their own expectations about income.

The most dramatic change was in their willingness to spend money, with the index to measure that plunging to zero from 36.6 points in the previous month. "The propensity to buy is really collapsing," the Nüremberg-based research group said in its conclusions.

GfK noticed that the hesitancy to make large purchases arose from fears that longer shutdowns will lead to job losses and bankruptcies.

In a separate survey, the institute found that 54% of Germans were "moderately" or "very concerned" about their own financial future, the highest level since the start of the coronavirus pandemic.