Italy on high alert over Coronavirus

"We've stopped shaking hands and kissing each other on the cheek," says Marco. This is rather rude by Italian standards, the young man adds semi-jokingly. Marco, who lives in Vittadone, a small village in the country's northern Lombardy region, has been wearing a face mask since Sunday. He complains that the pharmacy charged him ten euros for it — "an outrage," he says.

But face masks and hand disinfectant are hard to come by in the region these days, which drives up prices. Marco is one of the few villagers to wear a face mask; most others say they find it an unnecessary safety precaution even though their village neighbors Italy's "red zone" — a cluster of ten communities placed under de facto quarantine because of confirmed coronavirus infections. 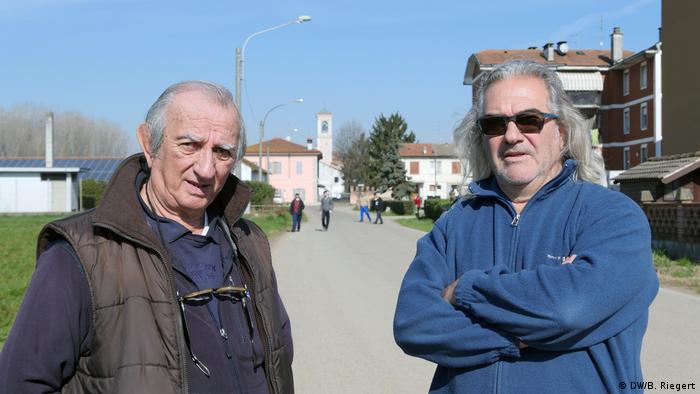 Authorities have decreed that nobody may enter or leave the "red zone." To enforce the quarantine, two uniformed Carabinieri — Italy's national police — have taken up position on the village road. But despite the blockade, they are letting farmers on tractors, cyclists and locals bound for the supermarket or pharmacy in the adjacent "red zone" pass and return. Enzo, another Vittadone local, says the officers will let anyone pass who can provide a good reason. He's been in the "red zone" to do his shopping before, and thinks it's not right to keep locals on lockdown like this. In his opinion, measures taken by local authorities and Italy's national government are too drastic. He does not understand why authorities want to block border crossings to France and Austria when the "coronavirus is already here."

And neither does he understand why Milan Cathedral and famed La Scala opera house have been closed. Most of the 200 confirmed coronavirus infections, after all, have been reported in rural Lombardy and neighboring Veneto. Italian Prime Minister Giuseppe Conte, who has been surprised by the rapid jump in virus infections, reportedly wants to act out of an abundance of caution. "But calling off Carnival festivities and football matches in Italy is really bad," says Enzo. 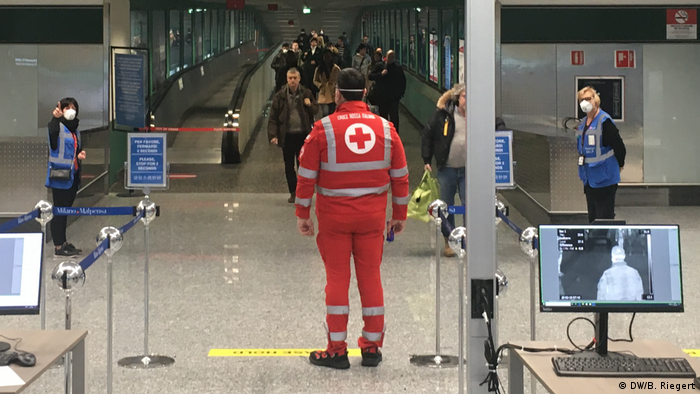 No funeral service for victim

Vittadone's school has been shut down. As have the village shops, along with Renzo's, the town's only bar. Locals are staying home, waiting to see how the situation will develop. Giuseppe, a local pensioner, says he isn't scared of the virus but does take it seriously. He was shocked, however, that there was no funeral service last Sunday for one of the people who died of the virus. He says mourners were forced to carry the coffin directly to the cemetery, which "was awful." Since the quarantine was imposed on neighboring communities, life in Vittadone has become even more quiet and "nobody knows how long it will stay like this," he says.

Italy's government cannot say when it will lift its precautionary measures. The country's health agencies, meanwhile, are relatively certain they have tracked down the first carrier of the virus in Italy — the country's "patient zero" — to a small town near Vittadone. The 38-year-old man contracted the virus and was hospitalized in Codogno where he reportedly spread it to many others. According to media reports, practically all infections can be linked to said individual.

Italy's government is therefore working to track down everyone who has crossed paths or interacted with the man in order to contain the virus outbreak. An unnamed individual who worked at Codogno hospital before it was shut down told ANSA news agency via phone that "there is a sense of panic because nobody knows what will come next and how we are supposed to take care of medical emergencies." 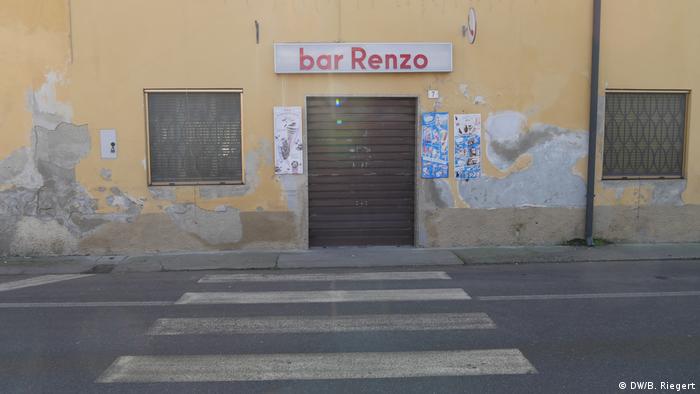 Bar Renzo — the only bar in Vittadone — remains closed, and with it the social life of the area

To date, it remains unclear where "patient zero" contracted the virus. It is known that while he himself had not traveled to China, he did interact with a friend who had just returned from there — who, however, tested negative for COVID-19.

Vittadone local Enzo would like to head to his favorite eatery — but it is located within the quarantined "red zone." So instead, he will give a different restaurant further north a try. As this reporter continues chatting to villagers, a group of teenagers joins the group. One of them is wearing a scuba mask. He explains that he did not have enough money for a regular face mask and that a scuba mask looks pretty "cool" anyways.

European stock markets have begun to claw back some of the big losses felt on Monday. A surge of new cases of coronavirus, particularly in Italy, prompted a sell-off across the continent. (25.02.2020)

In Iran the number of infections and deaths of the coronavirus are rising. Italy will host a European summit later on Tuesday. Get the latest developments here. (25.02.2020)

Italy on high alert over Coronavirus