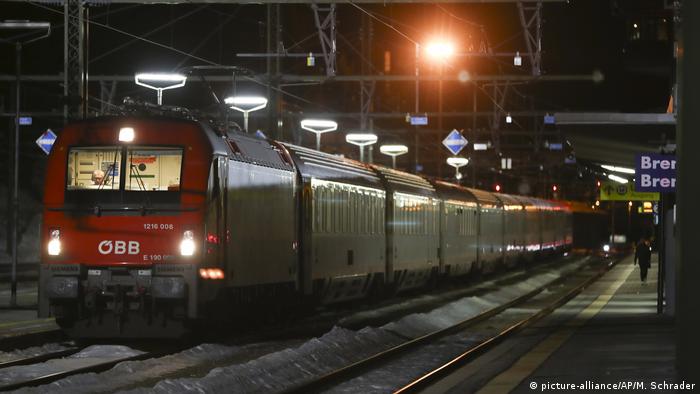 Austria on Sunday evening lifted a brief ban on trains traveling to and from Italy via a key international route. The block was imposed after two possible cases of the new coronavirus were discovered on board a train heading from Italy to southern Germany.

"The official block on the Brenner Pass has been lifted," Austria's state-operated rail company ÖBB announced on Twitter two hours after the stoppage began. Trains will travel according to their normal schedules on Monday morning, the company added.

Austria had halted some train connections on Sunday evening at the Brenner pass with Italy, after officials reported that two passengers who were possibly infected with the coronavirus had been stopped.

The two passengers, while feverish, have since tested negative for the COVID-19 virus, Austria's interior ministry said.

Earlier Sunday, ÖBB had confirmed to DW that trains through the key Brenner Pass had been halted "until further notice," with rail traffic stopped going in both directions.

"No further Italian trains are planned to go through the Brenner Pass tonight," the company had said in a statement.

Austria's Interior Ministry said at the time that the train in question had been traveling from Venice to the southern German city of Munich. Italian authorities alerted their Austrian counterparts about two people exhibiting fever symptoms on the train.

"The further procedure is currently being discussed together with the Italian authorities," the Interior Ministry said, adding that the train had been stopped on Italian soil.

The two passengers who were exhibiting symptoms were believed to be two German women, news agency DPA reported, citing an ÖBB spokesperson.

The spokesperson said the two women were isolated from other passengers in a section of the train.

Austrian Interior Minister Karl Nehammer said that officials would meet on Monday to discuss whether Austria should re-establish border controls with Italy.

Italian authorities have been battling to contain the new coronavirus, COVID-19, with the country currently logging over 150 cases.

The government has already closed off the worst-hit areas in the northern part of the country, including the Veneto and Lombardy regions.

The last two days of events for Venice's world-famous Carnival celebrations were called off on Sunday amid concerns about the outbreak.

Authorities have not yet determined the source of the outbreak in northern Italy.

"We are [now] even more worried because if we cannot find 'patient zero' then it means the virus is even more ubiquitous than we thought," Luca Zaia, Veneto regional president said.

Concerns over the spread of the virus elsewhere prompted Turkey and Pakistan to close their borders with Iran on Sunday after the death toll there rose to eight.

The number of fatalities in China also continued to rise, with 150 more confirmed deaths, putting the official death toll now nearly at 2,600. Chinese health authorities also reported 409 more infections, down from 648 the day before.

New Zealand has extended the ban on arrivals from mainland China for another eight days, Prime Minister Jacinda Ardern said on Monday.

The country had initially put travel restrictions in place for two weeks in early February to block exposure to the coronavirus. It was then extended by eight days, a period which expires on Tuesday midnight.

While New Zealand has no confirmed cases of COVID-19 so far, Ardern said the virus is likely to arrive in the country eventually. She  added that there are no plans to widen the travel ban to other countries. "We continue to focus on the epicentre of outbreak."