Coronavirus keeps Sri Lanka without a functioning parliament | Asia | An in-depth look at news from across the continent | DW | 29.05.2020

With Sri Lanka's parliament dissolved, and elections delayed by the pandemic, the Rajapaksa brothers are running the country without any checks on their power. 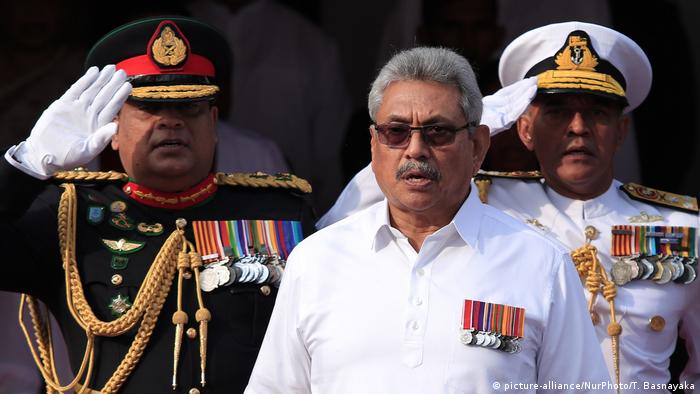 As Sri Lanka partially eased its coronavirus lockdown on Tuesday, with curfews being relaxed in the districts of Colombo and Gampaha, attention is again shifting to Sri Lankan President Gotabaya Rajapaksa and his decision to dissolve the country's parliament.

Sri Lanka is now essentially functioning without a legislature to check the executive's power, and constitutional activists call for the old parliament to be reconvened until it's safe to hold elections.

Rajapaksa comfortably won Sri Lanka's presidential election last November, and took office with an opposition-majority parliament. He then dissolved the parliament on March 2, a move allowed by Sri Lanka's constitution, and called for new elections on April 25.

Rajapaksa's party, Sri Lanka Podujana Peramuna (SLPP), wants to shift the balance in its favor with an overwhelming two-thirds majority.

In Sri Lanka's system of government, the president appoints a prime minister, and they share executive power. Following his victory in the 2019 election, Gotabaya Rajapaksa appointed his elder brother, Mahinda Rajapaksa, as the nation's PM. The move meant that the Rajapaksa brothers are now occupying the two most powerful executive positions, and if an election nets their party a two-thirds majority, they will have consolidated political control over Sri Lanka.

No election until August?

However, the coronavirus pandemic has thrown the process into disarray. The elections have been postponed to June 20, and there are concerns that voting could be pushed back even further.

"There was nothing controversial about the dissolution of the parliament, as the constitution has provisions that allow for it," said Asanga Welikala, a Sri Lankan constitutional law expert."However, the exercise of this power is subject to a very important rule — the election and first meeting of the new parliament must be held within three months," he told DW. "This is to ensure that the period during which there is no functional parliament is strictly limited."

The revised date for elections was set as June 20. However, this time frame crosses the three-month threshold on June 2.

"Matters have worsened after the election commission indicated that there may be no elections for the legislature until August," Welikala added.

The election commission said last week that it would not be ready for elections by the new date, as elections can only be held 10 weeks after health authorities declare that it is safe for voters to go to the polls.

Sri Lanka has reported around 1,500 COVID-19 cases and 10 deaths. While its containment of the pandemic has been deemed a success in the region, critics maintain that testing hasn't been sufficient to give an accurate picture of cases.

Sri Lanka's Supreme Court is currently processing petitions on new parliamentary elections. All petitions have two demands: delayed elections and reinstatement of dissolved parliament until it is safe for elections to be held.

Rajapaksa's government maintains that once dissolved, the same parliament cannot be brought back to life. However, under Article 70 of Sri Lanka's constitution, a dissolved parliament may be reconvened in case of an emergency.

In the political vacuum caused by the coronavirus lockdowns, Rajapaksa has strengthened his grip on government offices by appointing former military officials to a number of key positions in ministries.

In the absence of a legislature, Sri Lanka's coronavirus response is being steered by the Rajapaksa-led executive and the military.

"The president has consolidated his majoritarian appeal," said Ruki Fernando, a human rights activist based in the capital, Colombo. "There has been an intensified crackdown on dissent as the country battles the pandemic."

"Minorities, especially Muslims, have found themselves at the receiving end of hate."

At the same time, Rajapaksa has merged multiple institutions into ministries that are already under his influence.

"These actions are more political than constitutional, and the government has made it clear that it doesn't care much about constitutionality," said Welikala.

"The entire narrative had been security-driven, starting from the Easter attacks until the elections," said Tarun Nair, an intelligence analyst.

"He was elected on the promise of strong leadership, as the Sinhalese Buddhist majority has seen him as instrumental in ending Sri Lanka's civil war."

"He intends on using his militaristic appeal to strengthen control over governance," Nair added.