Gotabaya Rajapaksa, who led the government's takedown of the Tamil Tigers a decade ago, has been declared the winner of the presidential election. Despite outbursts of violence, election turnout was at a record high. 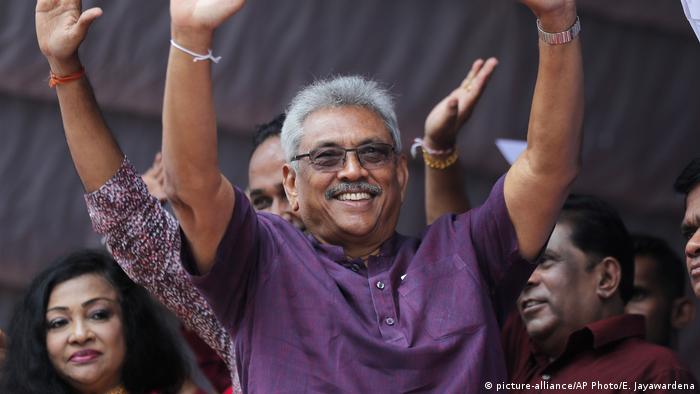 Rajapaksa scored 52.25% of the votes, the election body said. His main rival Sajith Premadasa of the National Democratic Front party, won 41.99%, according to the official results.

Rajapaksa, a retired lieutenant colonel nicknamed "the Terminator" because of his role in the country's 26-year civil war, has strong support in Sri Lanka's Sinhalese-majority areas..

Rajapaksa is the younger brother of charismatic but controversial Mahinda Rajapaksa, who was president from 2005-2015, including during the government's final victory over the Tamil Tigers in 2009.

Support for Premadasa trailed at some 44%. He had strong support in minority Tamil areas but a poor showing in larger Sinhalese constituencies.

Premadasa has conceded the vote to the opposition candidate.

"It is my privilege to honor the decision of the people and congratulate Mr Gotabaya Rajapaksa on his election as the seventh President of Sri Lanka," said the ruling party candidate.

However, chairman of the Elections Commission Mahinda Deshapriya said this did not impact attendance. Voter turnout was at a record 85%, with 15.9 million Sri Lankans casting their vote.

Sri Lanka's new president due to be sworn in

The defeat of the Tamil Tigers separatist group in 2009 ended nearly 30 years of civil war in Sri Lanka and earned the Rajapaksa brothers widespread support from the country's Sinhalese Buddhist majority. The UN estimates that up to 40,000 civilians died in the conflict that began in 1983.

For the presidential election, Rajepaksa ran a nationalist campaign that similarly promised to crush religious extremism and increase security.

Earlier this year, 259 people, including 45 foreigners, died in a series of suicide bombings in Sri Lanka carried out on Easter Sunday.  Jihadi militants inspired by the "Islamic State" carried out the attack.

Critics have accused the Rajapaksas of overseeing human rights violations during the war, including condoning the rape and murder of citizens. The former defense chief and his brother deny such charges.

Gotabya Rajapaksa had said that if elected, he would appoint his brother as prime minister and pardon military commanders charged with human rights violations.

Some minority groups are uneasy about his return to power.

Violent incidents marred Sri Lanka's presidential election; gunmen fired at a bus transporting Muslim voters to the polls. This only magnified national security as a top priority for the 16 million eligible voters. (16.11.2019)

People in Sri Lanka vote for a new president