Sri Lanka: National security dominates in presidential election | Asia | An in-depth look at news from across the continent | DW | 16.11.2019 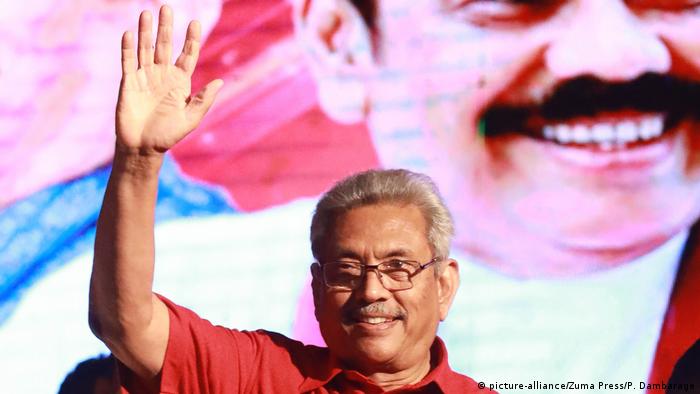 Sri Lanka is headed to the polls to elect its next president on Saturday, with former wartime Defence Secretary Gotabaya Rajapaksa and current housing minister Sajith Premadasa likely to lead in the vote.

One of the oldest democracies in South Asia, Sri Lanka's civil war saw the country mired in ethnic violence for decades, while the aftermath of the Easter Sunday bomb attacks in April this year led to additional concern for the country's national security.

Current President Maithripala Sirisena's time in office has been tainted by not only the April bombings but also a failed attempt to replace his Prime Minister Ranil Wickremesinghe with war-era president Mahinda Rajapaksa.

Experts have said that the 2019 presidential election, closely observed by arch-rivals Beijing and New Delhi — both have long struggled to maintain their respective interests in the island nation — could give birth to new dimensions in the country's foreign policy.

The presidential election is dominated by two prominent candidates:Gotabaya Rajapaksa of the Sri Lanka Podujana Peramuna (SLPP) party, who is the younger brother of former wartime President Mahinda Rajapaksa, and relative newcomer and current Minister for Housing Sajith Premadasa from the National Democratic Front.

The "strongman" role Gotabaya Rajapaksa played in defeating the Liberation Tigers of Tamil Eelam (LTTE), or the Tamil Tigers, back in 2009 has won him the support of a large number of Sinhalese, who make up more than 70% of Sri Lanka's population.

The Easter Sunday terror attacks carried out by Islamists killed more than 250 people, injured hundreds more, and triggered anti-Muslim sentiment in the country.

Experts say Rajapaksa has been trying to cash in on people's security concerns to gain votes.

"Under Mahinda Rajapaksa's government, we created a safer country. We created an environment in which people could take a journey without fear of bomb attacks. But this government has changed that situation," Rajapaksa said during his election campaign.

Dr. Harshana told DW that the idea of a very narrowly defined sense of national security appeared to be dominating pubic-discourse.

"In the aftermath of the Easter Sunday bombings and the spectacular failure of governance at multiple levels there is a strong push towards re-militarizing Sri Lanka," Dr. Harshana said.

Premadasa has also highlighted the issue of national security during his campaign, according to local media reports.

According to media reports, Gotabaya Rajapaksa has also been hammering the Sinhalese Buddhist nationalism issue in his election campaign, which reflects his tendency to mobilize the country's majority community in his support.

But such efforts do not guarantee Gotabaya the presidency. Relatives of killed or disappeared ethnic minority Tamils accuse him of committing war crimes during the anti-militancy drive in 2009 and this could tarnish his political image. Tamils make up 12.6% of Sri Lanka's population. 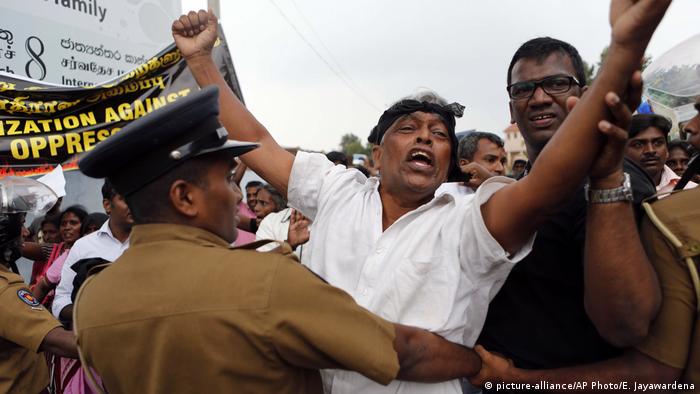 Dr Harshana Rambukwella, a professor at the Open University of Sri Lanka, told DW that these accusations of disappearances and torture are one of the major drawbacks for Gotabaya in mobilizing maximum support.

To counter the political narrative of Gotabaya, Sajit Premadasa has been putting more emphasis on national development issues that his government is blamed for failing to maintain in recent years.

Premadasa, who is currently the minister for housing, construction, and cultural affairs, heads the New Democratic Front, part of the ruling alliance. He is well-liked for his welfare policy and steps to eradicating poverty. 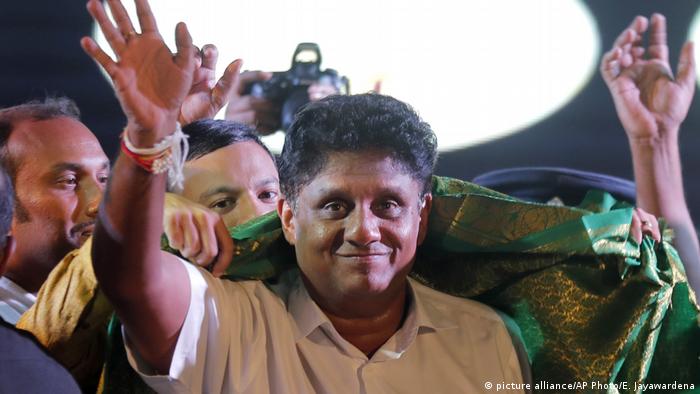 Minority vote could be crucial

Experts have said that Sri Lanka's minority community, which constitutes under 30% of the population, could play a major role in the election.

Many ethnic minority Tamils have offered their support to Premadasa and the Tamil National Alliance (TNA), the main Tamil political party, have declared their support of Premadasa — an additional setback for Rajapaksa's journey to power.

However, the minority Christians are looking for a strong leader who can address their security concerns as the community remains fearful following April's Easter Sunday attacks.

Meanwhile, Muslims, who constitute 9.7% of the population, are facing the dilemma of finding a candidate who could protect their interests.

Sri Lanka's Muslim community have been on the receiving end of violence triggered after the Easter Bombing attacks, and it is unlikely they could have faith in either of the two prime candidates, said Dr. Harshana.

Situated in the Indian Ocean, the island nation of Sri Lanka is a key location for global shipping, drawing attention from both Beijing and New Delhi.

The two countries have long been in a strategic struggle to see their own interests in place in the island; consequently, the two arch-rivals are closely monitoring the coming presidential election.

India has long shared close political, cultural, economic and military ties with Sri Lanka. In recent years, however, China has increased its footprint in the country. Beijing began to develop a close partnership with Sri Lanka when Mahinda Rajapaksa was president from 2005 to 2015.

But the relationship between Sri Lanka and China soured when the sitting president Sirisena suspended all Chinese investment projects, citing allegations of corruption, overpricing and flouting of government procedures.

"What will be interesting to see is how a Rajapaksa victory impacts India's relationship with Sri Lanka because he is seen as being close to China — a relationship that India is very wary of," said Dr. Harshana.

"If Premadasa wins, one can expect a greater tilt towards India and the West — essentially a continuation of the foreign policy of [current Sri Lankan Prime Minister] Ranil Wickremesinghe," he added.

Sri Lanka has been under a state of emergency since a string of bombings at three hotels and three churches killed more than 250 people in mid-April. Authorities say that anti-terrorism operations are still underway. (22.06.2019)

Kenya's Supreme Court has ruled against candidate Raila Odinga's challenge to the outcome of last month's presidential election. Odinga had alleged electoral fraud after his opponent William Ruto was declared the winner.