Sri Lanka's PM has said thousands of missing civilians are likely dead after only 292 people were found in government jails. The UN has called for a tribunal to investigate crimes committed during Sri Lanka's civil war. 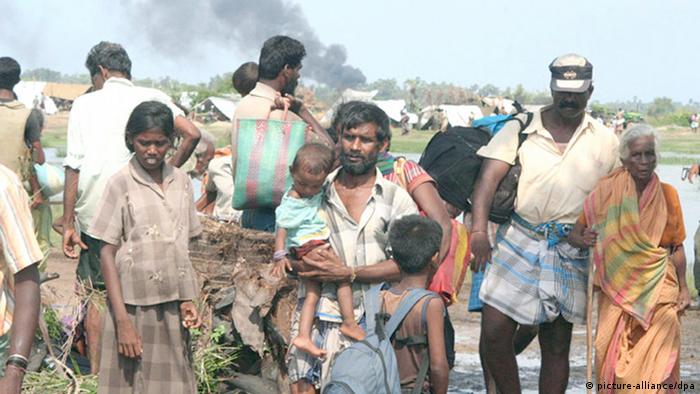 Many ethnic Tamil civilians were forcibly displaced by government troops

Tamil leaders in Sri Lanka's Northern Province on Sunday asked the UN's top human rights official for assistance in tracing thousands of civilians who disappeared during the brutal conflict between the government and Liberation Tigers of Tamil Eelam (LTTE) that lasted more than 25 years.

Sri Lanka has announced plans to create a truth commission and reconciliation office aimed at addressing war crimes committed during the country's decades-long civil war. At least 100,000 were killed during the conflict.

Zeid Raad al-Hussein, the UN high commissioner for human rights, began his four-day visit to Sri Lanka on Saturday in order to review measures taken by the government to investigate war crimes committed during the 26-year conflict that ended in 2009.

The Northern Province was considered the epicenter of the conflict.

"The discussions very much focused on the challenges faced by the province but also the plans and achievements in that regard, and the people who aspire to see more information in terms of those detained and those missing and the issue of release of lands," said Zeid.

Wigneswaran said he gave al-Hussein a list with details of more than 4,000 civilians who were reported missing, including the dates and locations of where they were last seen.

Sri Lankan Prime Minister Ranil Wickremesinghe said that most of those reported missing were likely dead after the new government discovered only 292 people arrested during the conflict were in government detention.

Many ethnic Tamil civilians were uprooted by state forces and pro-government militias during the conflict and their land was occupied by the military. 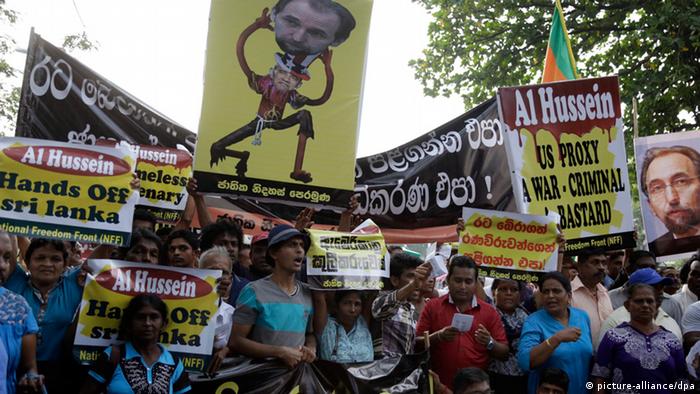 On Saturday, ultranationalist members of the National Freedom Front (NFF) party protested al-Hussein's visit saying the UN human rights chief was a "US proxy" and a "war criminal."

"We will not allow setting up courts to fulfill the need of Western nations. Al-Hussein has come here to take our war heroes to [the] guillotine, but we won't allow that to happen," said NFF leader Wimal Weerawansa, according Reuters news agency.

In September 2015, a UN report produced by the Office of the High Commissioner for Human Rights revealed "patterns of grave violations" on both sides of the conflict and called for the creation of a special court comprising local and foreign magistrates to try suspected war criminals.

Although President Maithripala Sirisena's coalition agreed to investigate the war abuses internally, he has said Sri Lanka does not need foreign participation in any inquiry.

Up to 100,000 people were killed during the conflict, with some 40,000 of them in the last months of fighting, according to UN figures.