Sri Lanka: The Rajapaksa brothers walk a diplomatic tightrope with China and India | Asia| An in-depth look at news from across the continent | DW | 21.11.2019

Sri Lanka: The Rajapaksa brothers walk a diplomatic tightrope with China and India 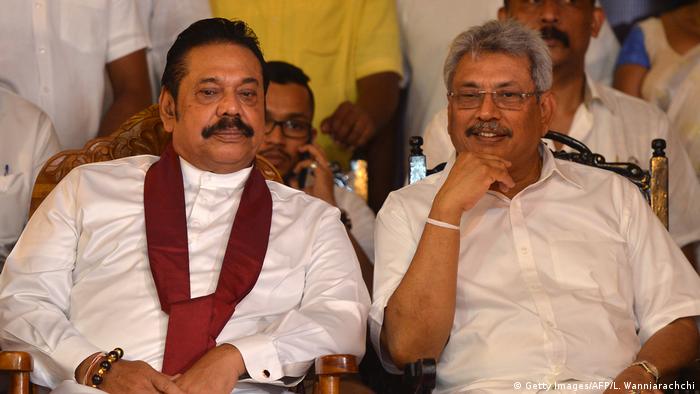 As Rajapaksa picks up the reigns of a country saddled with billions of dollars of debt, his supporters expect him to revitalize an economy still reeling from the Islamic State-inspired Easter Sunday attacks that killed over 250 people in April. Many expect he will look to Beijing to help deliver this key campaign promise.

The road to riches?

Launched by Chinese President Xi Jinping in 2013, the Belt and Road Initiative (BRI) is an ambitious infrastructure project that seeks to strengthen China's connectivity with the world. The more cash-strapped BRI partner nations, like Sri Lanka, are hoping Chinese investment will ease their economic woes. Colombo's dependence on Beijing's money, however, precedes the BRI.

Sri Lanka: 'We have our debt under control'

Sri Lanka: 'We have our debt under control'

When Sri Lanka's civil conflict between the Sinhalese Buddhist majority and Tamil separatists ended in 2009, then President Mahinda Rajapaksa was desperately in need of a strong ally. The United States, Europe and India were critical of the Rajapaksa government amid allegations of human rights abuses against the ethnic Tamil minority.

Then Mahinda Rajapaksa pivoted to Beijing and the money flowed in. Roads, railways, ports and power stations were built across the island nation. Today, China is Sri Lanka's biggest source of foreign direct investment, followed by India.

China is in no doubt pleased that Gotabaya Rajapaksa, from the Sri Lanka Podujana Peramuna party, won 52% of the vote in Saturday's election. His main rival, Sajith Premadasa, from the United National Party, came in second with 42%.

On Wednesday, Gotabaya appointed his brother Mahinda as prime minister following the resignation of Ranil Wickremesinghe.

When Mahinda took the oath of office in Colombo he promised to take the country forward "with a new vision to further develop and protect it for future generations."

During the political chaos, the international community was reluctant to take sides. But China, at the time, was quick to congratulate Rajapaksa on his return to power.

"I would say in this global environment, where neo-authoritarian leaders control many important states, their rule has been normalized. I'm doubtful that much pressure will come on a Rajapaksa government in the name of human rights principles, so I think all major players will have reason to increase their engagement in terms of trade or infrastructure projects."

Sri Lanka's new president due to be sworn in

In 2014, tensions between India and Sri Lanka heightened when a Chinese submarine and warship were allowed to dock in Colombo, fuelling New Delhi's fears of Chinese aggression.

After his defeat in 2015, Mahinda Rajapaksa also accused India of interference in the elections, much to the annoyance of Prime Minister Narendra Modi.

During the Sirisena presidency, relations with India improved, despite New Delhi expressing concerns when the Hambantota port in southern Sri Lanka was leased to China for 99 years, owing to Colombo's inability to repay its debts.

Gotabaya Rajapaksa appears keen to come out of his brother's shadow. By pledging to rebuild Sri Lanka's intelligence services, he is indirectly pledging to work closely with India. On the campaign trail, he was critical of the outgoing government, who allegedly allowed the sophisticated Easter Sunday bombings to fall under the radar despite warnings from the international community.

"India and Sri Lanka now have a shared anti-Muslim outlook," said Rajesh Venugopal, associate professor at the Department of International Development at the London School of Economics.

"Gotabaya Rajapaksa has come to power on an anti-Muslim backlash, similar to Modi where Muslims are also being used as a security threat."

Prime Minister Modi was among the first to congratulate Mahinda Rajapaksa on his return to the top of Sri Lankan politics.

Protection of the Tamils

Traditionally, India has campaigned on behalf of Sri Lanka's Tamil community, which is yet to see justice for wartime killings and disappearances. There is concern that New Delhi's credibility on this issue has been undermined by the Modi government's vilification of minorities.

"Harmonious coexistence has deteriorated over the last few years in India, and that doesn't give them the authority to wag the finger. There is also the argument that Modi doesn't need Tamil Nadu [a southern Indian state] politically, as he has the support he needs in the north," said Venugopal.

Overseas, the Tamil diaspora maintains its strength and may be able to lobby governments in Canada, the US, Australia and the UK. But with the brothers back in power, and Gotabaya Rajapaksa's declaration that he will repeal Sri Lanka's commitment to a UN human rights agenda for reconciliation and accountability, justice will remain elusive.

The Rajapaksas have not positioned themselves as reformers, but have instead used the outgoing government's failures to fuel support for their strongman style of governance, say observers.

China will continue to play an important role in Sri Lanka's economic future, but relations with India might be entering into a new era, putting this small island nation in the middle of two heavyweights.