Coronavirus: India′s lockdown turning into humanitarian crisis | Asia | An in-depth look at news from across the continent | DW | 09.05.2020

A nationwide lockdown and sudden suspension of all transport has left millions of migrant workers in limbo. Many of them are in a dire situation and have been driven close to starvation, say activists. 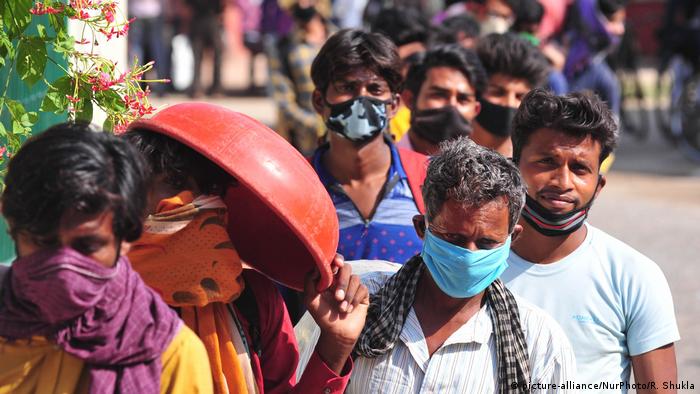 A freight train in India's western Maharashtra state's Aurangabad district on Friday ran over and killed at least 14 home-bound migrant workers who reportedly fell asleep on the tracks due to exhaustion.

According to police, the laborers worked for a steel company and were walking to their village in the neighboring state of Madhya Pradesh throughout the night. While 14 of them died on the spot, two of them later succumbed to their injuries. India's Ministry of Railways said that the driver of the train tried to stop in time but failed.

The incident has once again put the spotlight on the severe hardships faced by millions of migrant workers in India over the past few weeks. Many of them have been walking home to their villages from major cities after losing their jobs following the nationwide lockdown imposed to contain the spread of the novel coronavirus.

The lockdown — the world's largest — has forced the country's 1.3 billion people to stay indoors since March 25 and has delivered a heavy blow to the livelihoods of a significant proportion of the country's nearly 40 million migrant laborers, according to a recent World Bank report.

At the beginning of the month, the Indian government extended the lockdown for another two weeks beyond May 4.

Migrant laborers, some trapped in cities with others stranded in relief camps amid the lockdown, are eager to return home. However, travel by air, rail and metro as well as any inter-state movement by road has been banned as part of the virus containment measures.

"We continue to be trapped in camps which is not pleasant. There is no work and income and many of us are frustrated and long to get back home," Pritam Mondal, a diamond cutter, told DW. 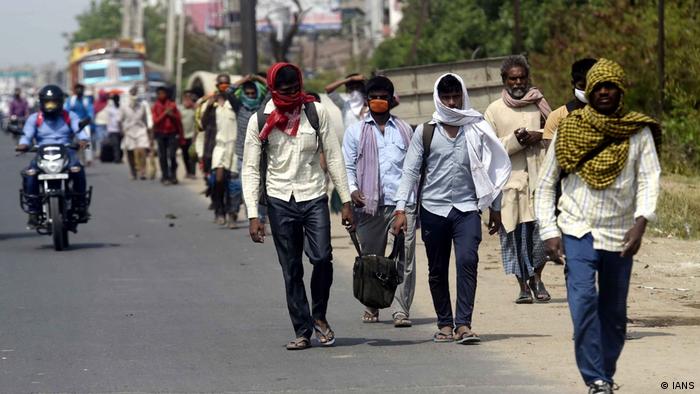 India's sudden cancelation of trains left many migrant workers in limbo, and it wasn't until recently that the country began relaxing some of its transport measures. In the northern state of Uttar Pradesh, some 22 trains from other states have arrived in various districts, transporting thousands of migrants.

The government has also authorized a number of special trains to transport some 300,000 workers from the diamond cutting and textile industries stranded in the western state of Gujarat and Odisha in the east.

The government had initially asked the millions of stranded migrant workers to pay their own train fares home. However, after the move sparked controversy, state governments and the Ministry of Railways decided to cover the fees.

In another controversial move, authorities in the southern state of Karnataka initially refused to allow some 600,000 migrants to return home, encouraging them to work instead for real estate developers.

No end to migrants' woes

Even if migrant workers manage to return to their villages amid the coronavirus pandemic, they are forced to undergo a mandatory 14-day quarantine.

"I am back home but unemployed and I don't know how long this will last. I used to send money home every month to feed the family. Now, there is one more mouth to feed," said Radhey Shyam, a construction worker from Lucknow in Uttar Pradesh.

Phased exit from restrictions in India

Anindita Adhikari from the Stranded Workers Action Network (SWAN) warned of an "unfolding humanitarian crisis" when it comes to India's migrants. The network works with over 16,000 migrant workers across states to raise awareness of the plight of migrants.

"Owing to the lack of cash and food availability … if the virus does not kill them, hunger will. It is a dire situation and many day workers have been driven close to starvation," Adhikari said.

The World Bank has called on the Indian government to include all migrant workers in public services, including healthcare and cash transfer programs. The Washington-based financial institution also urged the government to protect migrants from discrimination.

Only a few state governments have extended relief measures for stranded migrants such as free rations or cash transfers.

In Mumbai, less than one percent of migrant groups received any government rations. Charities and local NGOs stepped in and provided 42% of migrants with meals.

"In some states, we found that migrants were actually foraging for food. That is a sad state of affairs," aid worker Pritam Dorji told DW.

According to the New Delhi government, there are between 660,000 and 1.5 million migrants in relief camps nationwide who are receiving food rations and cash transfers amid the pandemic. Civil society organizations argue that this figure does not factor in the "free floating" population of migrant laborers and warned that the figure could run into millions.

After India extended its coronavirus lockdown, migrant workers defied government orders by gathering at a railway station in Mumbai with one demand — "send us home." (15.04.2020)

India's battle with the coronavirus pandemic