Coronavirus lockdown: Delhi struggles to feed migrants left behind | Asia | An in-depth look at news from across the continent | DW | 04.04.2020 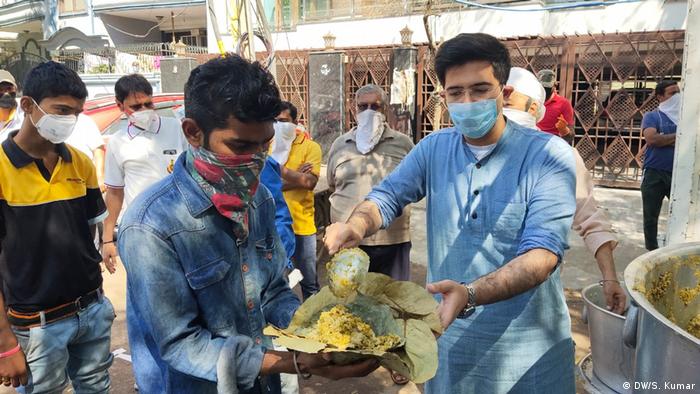 Prime Minister Narendra Modi praised Indians for their resilience in a televised address on Friday, the 10th day of India's nationwide lockdown to fight the novel coronavirus. There was, however, no mention of the thousands of migrant workers stuck in larger cities like the nation's capital, New Delhi.

As the world's governments call for social distancing, the migrant workers in Delhi's shelter camps do not have that luxury. For them, life is now a race for survival. "We tried to go home, but all of the bus stands and stations were closed," one worker told DW, while waiting for food at a shelter run by the Delhi Urban Shelter Improvement Board (DUSIB). "The police told us to stay here.”

Most people at these shelters are not from Delhi, but are workers who have traveled to the city from nearby states like Uttar Pradesh and Bihar, to seek better employment opportunities for themselves and their families. While some work in private establishments, others work as manual laborers at construction sites and are paid on a daily or weekly basis.

After most businesses closed their doors due to the lockdown, many of these workers found themselves without any source of income to sustain themselves, and no easy way to return home. While some chose to walk back to their home provinces, sometimes hundreds of kilometers away, just to avoid starvation, others were left behind. 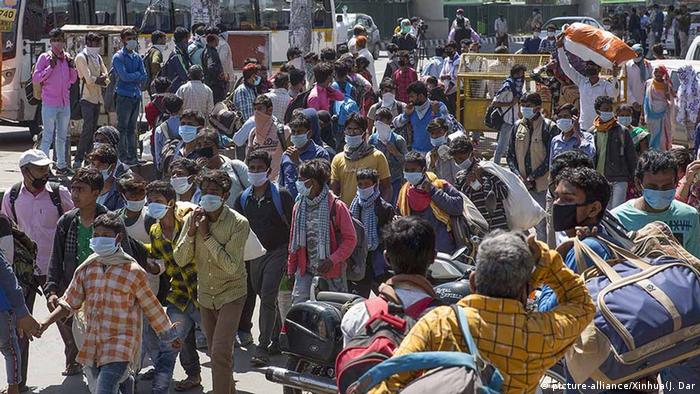 While some migrant workers chose to walk back to their home provinces, sometimes hundreds of kilometers away, others were left behind

According to the Delhi government, arrangements have been made to feed close to one million people at 2,700 centers across the capital region. The government has also set up temporary shelters in schools to house migrant workers, and keep them from making the long journey home.

While there are social distancing boxes drawn on the floors of these centers, not many can follow these guidelines on an empty stomach. The queues are long — sometimes extending around the whole shelter — but the workers are willing to accept that hours-long wait just to get a few oranges.

Even as the government works to expand its support for those in need, the demand far exceeds the supply. Additionally, many workers are not even able to reach the centers because of the lockdown measures.

A large number of nonprofit organizations in the city are taking the initiative to fill the gaps in supply that the government has not filled, and deliver the essentials to those in need. The headquarters of Goonj, an NGO that works on disaster relief and humanitarian aid, is always buzzing with movement.

Relief workers measure out grains and rice, which are then packaged for those in need, while women sew face masks, of which there is a shortage in Delhi.

Goonj usually works to provide relief during natural disasters like earthquakes and floods, but the COVID-19 pandemic has presented the NGO with a different challenge; not only in how to distribute aid to those in need, but also regarding staffing.

Unlike in previous times, when Goonj was able to employ a large number of aid workers, the organization is now limiting the number of bodies it utilizes in order to prioritize social distancing measures.

And although the government's level of preparedness is questionable, relief workers say they would rather not waste time assigning blame. "The government was not prepared for a problem of this scale. They are making an effort, but there is a gap that all of us need to work together to fill," said Imran Khan, a core member of the Goonj team. "This is now an issue of survival." 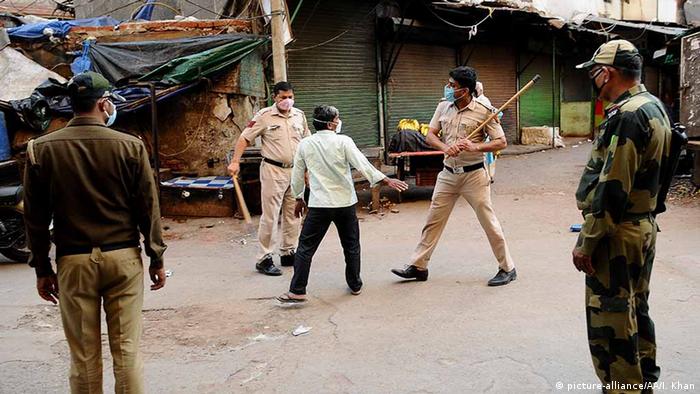 'If we try to go somewhere to look for work, the police here beat us,' a migrant worker told DW

Despite the combined efforts made by the government and nonprofits, many of the poor still do not have access to the benefits or sufficient medical care.

"There are no emergency medical services available here, and we aren't permitted to leave," said a daily wage worker, whose makeshift mask was a green handkerchief tied around his face. "We'll have to call an ambulance, or ask these cops to let us go."

Many also say that the restrictions on movement prevent them from accessing necessary services.

"If we try to go somewhere to look for work, the police here beat us," another worker told DW. "They say everything is closed, and they tell us not to move around. So what can we do? We'll just starve here."

Indian authorities are trying to track down almost 8,000 people who attended the event. This has given rise to an anti-Muslim sentiment in public debate. (02.04.2020)

Ex-Indian cricketers Yuvraj Singh and Harbhajan Singh have drawn criticism from a section of Indian society for supporting former Pakistan captain Shahid Afridi's foundation in its fight against the coronavirus pandemic. (02.04.2020)