The number of coronavirus infections has steadily risen in India, with the country so far recording over 23,500 cases. While several states are lagging in testing and containment, others are doing better. 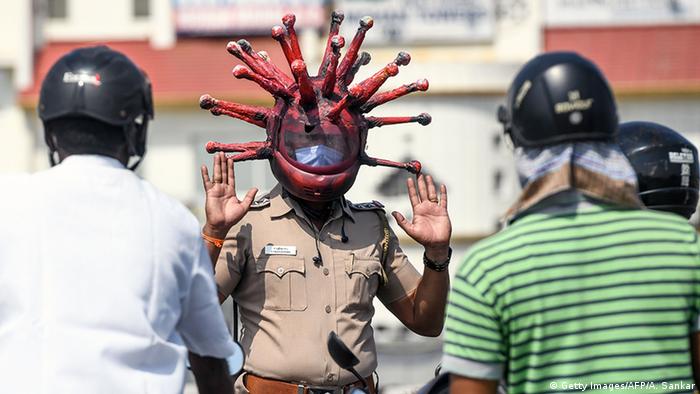 The southern state of Kerala could probably become the first state in India to flatten the COVID-19 curve. It has bucked the national trend by delaying the doubling time of coronavirus cases — meaning the number of days it takes for the cases to double — to 72.2 days, against a national average of 7.5-8 days.

"As of today, we have 437 cases and three deaths. Early tracking, screening, home quarantine, strict isolation and public participation are the core reasons for Kerala's success. Now, the test will be when the lockdown restrictions are lifted from May 3," Dr B Iqbal, chairman of the Kerala state expert committee on coronavirus, told DW on Thursday.

Kerala's first COVID-19 case was of a medical student who arrived from the Chinese city of Wuhan on January 24 and was diagnosed six days later. It was the first coronavirus infection recorded in India and for several weeks, Kerala alarmingly topped the charts with more cases than elsewhere in the country.

"The state's healthcare system works like a well-oiled system from bottom to top. It is not the first time we are fighting a deadly epidemic. In 2018, the state had dealt with an outbreak of Nipah, a brain-damaging virus, where 17 people had died and we contained a potential disaster," K K Shailaja, the state health minister, told DW.

The central Indian state of Chhattisgarh has also been proactive in tackling the coronavirus problem, say observers. Authorities there are relying on an approach based on color-zoning districts into red, orange and green. Out of 28 districts in the state, 23 haven't reported a single coronavirus so far.

"We are having less number of cases and zero deaths. The key was that the state started preparations early and then luck also played its part," Health Minister T S Singh Deo told DW.

The number of cases in states like Kerala is far lower than that in the western state of Maharashtra, which has detected more than 6,400 infections until now. The city of Mumbai, Maharastra's state and India's financial capital, alone accounts for over 3,000 cases.

Over a third of all new cases recorded in India are in Maharashtra, the second-most populous state in the country. Meanwhile, states such as Gujarat and Delhi, which till a week ago had a little over 500 infections, now have over 2,300 cases each.

A drop in the rate of growth?

On Friday, India completes a month in nationwide lockdown. Over the past several weeks, Prime Minister Narendra Modi's government has been trying to curtail the transmission of the virus with a "cluster containment strategy." The aim is to contain the disease within a defined geographic area by early detection of cases, breaking the chain of transmission and thus preventing its spread.

The government initially imposed a 21-day lockdown — which was supposed to end on April 14 — but later extended it until May 3.

"Our doubling time of cases is increasing. The current situation indicates that a significant increase in the number of COVID-19 cases is unlikely," said Raman Gangakhedkar, the head of epidemiology and infectious diseases at the Indian Council of Medical Research (ICMR).

However, the actual number of recorded cases currently stands at over 23,500 cases. While over 700 have died from the disease, more than 5,000 have recovered.

"There is a decrease in the rate of growth of infection in India and social distancing in India has been more effective than in many other countries," K Srinath Reddy of the Public Health Foundation of India told DW.

At the district level, many states have relied on aggressive testing, technology, foolproof contact tracing and an effective public awareness campaign on physical distancing.

There have been models of containment and success stories that are now sought to be replicated elsewhere.

In Agra, in the northern state of Uttar Pradesh, the district administration has identified epicenters, demarcated the impact of positive confirmed cases on the map, and deployed a special task force as per a micro plan whereby the hotspots were managed through an active survey and containment plan.

Similarly, in Bhilwara city in Rajasthan, complete isolation was imposed, with the city and district borders sealed and checkposts set up at every entry and exit point.

To stop the virus' spread, states like Goa and Telangana are also increasingly relying on technology for monitoring people's movement and contact tracing.

According to the Health Ministry, there are at present 170 hotspot districts, which make up about 29% of the country's geographical area and house 37% of the population.

"Now, we have added over 60 districts that have not reported any new case in the last two weeks," Lav Agarwal, joint secretary to the Health Ministry, said during the daily government briefing.

India's lockdown is currently set to end on May 3, which would mark 40 days of home-isolation for the country's over 1.3 billion people.

There has been an easing of restrictions in some regions which have been successful in containing the virus' spread. Agricultural and industrial activity has partially resumed in such places.

Authorities hope that the sweeping shutdown and the ramping up of tests nationwide will allow the country to avoid the worst of the massive public health crisis.

After India extended its coronavirus lockdown, migrant workers defied government orders by gathering at a railway station in Mumbai with one demand — "send us home." (15.04.2020)

Indian-administered Kashmir has been under a security lockdown since August 2019. When New Delhi finally started to ease measures, the region was hit by coronavirus, jeopardizing Kashmiri's long-awaited freedom. (10.04.2020)