Coronavirus in the Balkans: Can disasters defeat hatred? | Europe | News and current affairs from around the continent | DW | 26.03.2020

Amid the COVID-19 outbreak, the cities of Belgrade and Sarajevo are expressing strong and visible support for Croatia. For the first time in 30 years solidarity and care are overshadowing hatred in the Western Balkans. 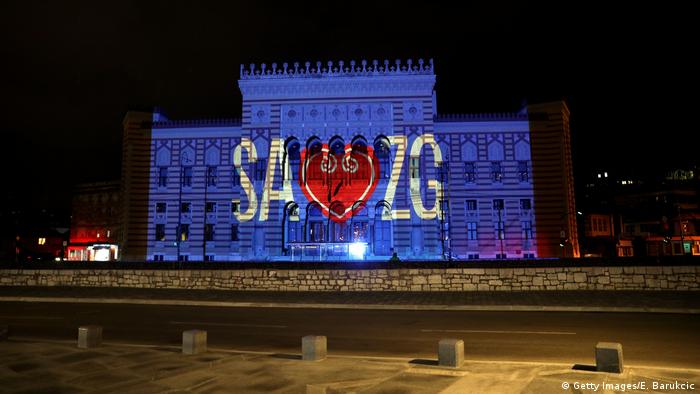 Sarajevo City Hall illuminated with a message of support for Zagreb

Like in many other places in the world, Belgrade's citizens have opened their windows and balconies to support nurses, doctors, epidemiologists and police officers. But on March 22, the applause was also directed at something else. That Sunday evening's "Applause at 8" was meant to support Croatia — the country against which Serbia fought a war 30 years ago. That very morning, Croatia's capital, Zagreb, had been shaken by a strong earthquake. Sarajevo quickly joined Belgrade's citizens in their support. The applause was well received in Croatia and across the region.

It was the first time in 30 years that Belgrade expressed such strong and visible support for Croatia. A similar kind of solidarity, though with less impact, has been seen during the last decade in the context of floods and sports events on both sides of the border. Serbs supported the Croatian soccer team during the final games of the 2018 World Cup, while Croats supported Novak Djokovic as he was winning Grand Slams.

Right after the earthquake, a cartoon emerged in Sarajevo depicting "Vucko" (the wolf) — the symbol of 1984 Sarajevo Olympic Games — who was holding "Zagi" (the sea lion) — a symbol of the 1987 Zagreb University Games — to help him get out of debris left by a collapsed building. The more cynical critics focused on the fact that both symbols represent events that happened before the breakup of Yugoslavia. The majority of the public is not so cynical, however. The cartoon went viral.

As a message of support to Zagreb, the Sarajevo City Hall was lit with colorful lights and a big heart appeared in the middle of its facade. The messages were received with overwhelming emotion in both countries. 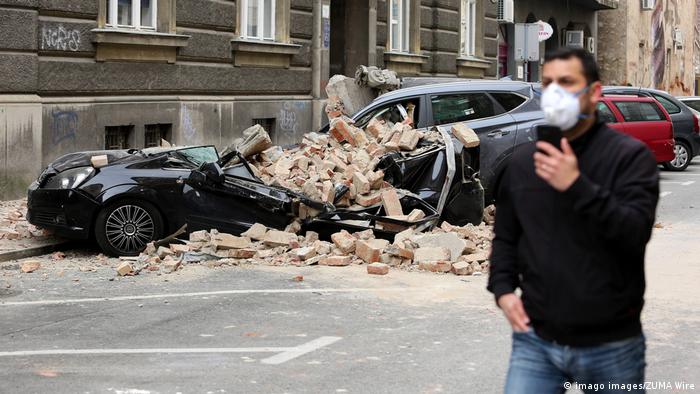 Zagreb was hit by a strong earthquake on March 22

An ongoing Balkan joke says that coronavirus has no chance in Bosnia-Herzegovina because the leaders will first divide it into three ethnic coronaviruses, weaken it and, as a result, minimize its danger. Well, the virus does not care for ethnicity, of course, but it does force leaders to act differently. In Mostar, the city which symbolizes the ethnic division in Bosnia, there are two hospitals: one for the ethnic Croats (Catholics) in the west of the city, and the second one for the ethnic Bosniaks (Muslims) on the east side. The hospital in the west recently received a pregnant woman who had tested positive for coronavirus. The two hospitals then quickly made a deal — they moved their entire gynecology section to the hospital in the east. The whole place was disinfected and a few days later, the gynecology department was moved back. A baby from the "west" being born in the "east" might become an interesting story one day.

The virus that defeated hatred

In Dobrinja, on the outskirts of Sarajevo, people leave food in front of buildings for those who cannot afford it. The receiver's ethnicity does not matter. The same is happening in the city of Zenica. Young volunteers from the region bring food to the elderly; medical students offer to volunteer in hospitals or babysit the children of doctors, nurses or police officers, free of charge. Successful sportsmen keep sending donations both in the region, and in neighboring countries. Miralem Pjanic, a soccer player for Italian club Juventus, posted a photo of himself on Instagram wearing a shirt belonging to his former teammate, Mario Mandzukic. His photo has received over 130,000 likes. Suddenly, ethnicity is of little importance.

Even media outlets have no time left to forge conflict in these troubled circumstances, since everybody discusses the same topic with the same message — follow experts' advice, stay at home, wash your hands, and so on.

Those who organized the "Applause at 8" in Belgrade said: "The virus will pass, but what we wish for is that solidarity stays. Care and support do not give in to ethnic, religious or political divisions." How long will this honeymoon phase last? If the coronavirus keeps forcing people in the Balkans to express solidarity, like in any another part of the world, can this unity become a pattern, following the crisis?

The amount of likes and support on Instagram, Facebook and independent media for the "Applause at 8" in Belgrade, the cartoon from Sarajevo, the City Hall's message of love and other similar actions, is huge. They do not go together well with political messages and actions, which have been leading the Western Balkans towards the verge of conflict for years. The current solidarity in the region seems to show that things could go in the opposite direction.

Should decision-makers not sense the message and the spirit of hope blooming all over the Western Balkans, a huge opportunity will be missed. For a change, politicians in the region should really try to win elections based on solidarity and tolerance, instead of indifference and hatred.

Opting for this positive approach, 30 years after the collapse of Yugoslavia, is far too late, anyway. Still, better late than never. If they needed a disaster to lead them towards change, so be it.

Coronavirus digest: Omicron likely to infect half of Europe in 2 months 11.01.2022

WHO Europe has said that more than half of Europeans will likely get infected with the omicron variant in the next 6 to 8 weeks. Elsewhere, Hong Kong is preparing to vaccinate everyone over 5. Follow DW for the latest.