The German chancellor urged understanding and solidarity one day after the government said up to 70% of people in the country could become infected with the coronavirus. Infections in Germany rose by 57 on Wednesday. 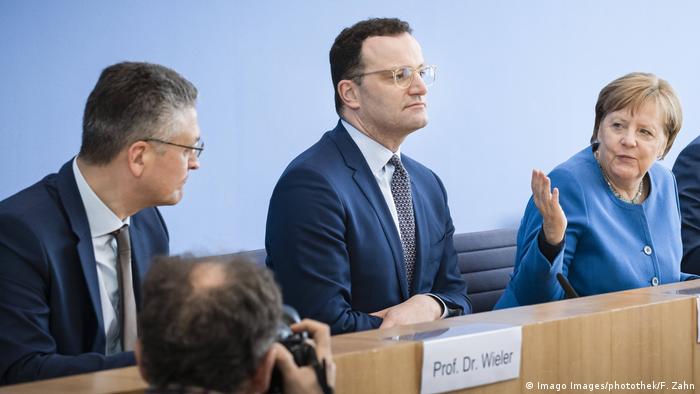 German Chancellor Angela Merkel on Wednesday said "solidarity and reason" were central to the country's response to the virus.

"The virus is in Europe, it is there, and we must understand that," Merkel said at a press conference to discuss the country's response to the COVID-19 (Coronavirus SARS-CoV-2) outbreak.

About 60% to 70% of people in Germany are likely to be infected because the virus is new, there is no vaccine or treatment, and the population has no immunity, Merkel said, repeating comments made ahead of a coalition government meeting on Tuesday.

Measures would be directed toward protecting the elderly and people with preexisting health conditions — as these groups are most at risk from the virus.

"I don't want to comment on the situation in Germany, although I believe such statements rather cause panic. In any case, we have adopted strong measures for such worst-case scenarios to be out of the question," Babis was quoted by Czech news agency CTK as saying.

Experts have warned that panic could exacerbate issues facing healthcare systems dealing with the crisis.

Read more: Coronavirus, cold, or flu symptoms: When should I see a doctor?

How will Germany respond?

Germany's response will focus on ensuring that police, critical infrastructure and medical personnel can continue to their work in a bid to ensure that health services will not be overwhelmed.

German Health Minister Jens Spahn repeated his call to avoid major events, soccer games or club visits. He advised facemasks and disinfection spray was not necessary for people to avoid being infected, saying that intensive hand-washing with soap was enough to stop infections.

A meeting is planned for Thursday between the premiers to discuss the state-level response to tackling the virus.

Merkel announced plans for economic measures to shield business and industry from the effects of the virus, including a liquidity package to be discussed this week.

She suggested a break with the government's "black zero" policy of not taking on any new debt, saying: "We won't be asking every day what that means for our deficit now." She added: "It is a special situation. We will do what is necessary."

Read more:Opinion: What happens next after the coronavirus stock market crash?

Lothar Wieler, the head of the Robert Koch Institute (RKI), the country's public health body, warned of more deaths and severe cases of illness in Germany.

"Of course, more people will die here, too," he told reporters.

Wieler said the virus, which remains largely unknown, wasn't spreading like a wave, but through specific regions. The slower the virus spreads, the better the chances of finding a treatment or developing a vaccination, he added.

There are more than 1,600 confirmed cases in Germany and three people have died in the most populous state of North Rhine-Westphalia, according to figures published by Johns Hopkins University's coronavirus resource center.