The warnings were applied to several regions within France, as well as Geneva, Prague and parts of Croatia. Meanwhile, India saw another record daily case increase with nearly 96,000 new infections. DW has the latest. 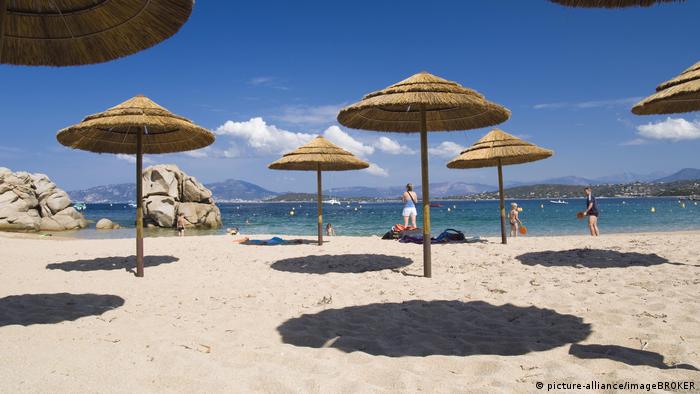 The German Foreign Ministry announced new travel warnings late Wednesday for high-risk regions throughout Europe. In France, existing warnings will be extended to the island Corsica, Ile-de-France, Provence-Alpes-Cote-d'Azur and Nouvelle-Aquitaine.

Travelers to Switzerland are warned against visiting the cantons of Geneva and Vaud, while the censure also applies to the Czech capital of Prague and parts of Croatia.

Additionally, the blanket travel warning for around 160 non-European countries will only be extended until the end of September, after which authorities will evaluate each country individually.

Latest developments around the world

The global death toll has passed 900,000, with nearly 28 million confirmed cases. The country with the most coronavirus deaths in gross terms is the United States with over 190,000 fatalities, followed by Brazil and India.

A Dutch university is holding open-air classes in parks, public squares and parking lots to limit the number of lectures taking place online because of the coronavirus pandemic.

University College Roosevelt had held classes have been half in person, and half working from home, but then it decided to allow classes outside. Some 60% of students at the university come from countries outside the Netherlands

The Netherlands, which has recorded more than 75,000 coronavirus cases and 6,244 deaths, has lighter restrictions than many other European countries but the government has warned people to be careful after a recent uptick.

The coronavirus can directly invade the brain, causing headaches, confusion and delirium in some patients, according to a study led by Yale immunologist Akiko Iwasaki.

According to the paper, the virus is able to replicate inside the brain, and its presence starves nearby cells of oxygen. The research is, however, still preliminary but offers new evidence to support what was previously an untested theory.

India has seen another record daily increase in cases, reporting 95,735 new infections within 24 hours. According to the Health Ministry, the number of people known to have infections is now at 4,465,863. India also reported 1,172 new deaths, bringing the total number of fatalities to 75,062.

Some experts have warned that India's outbreak is entering a more dangerous phase as the virus leaves the cities and spreads to smaller towns and villages.

The supplementary budget, the fourth of its kind this year, comes on top of 277 trillion won in stimulus pledged so far to prevent a steep economic downturn.

The Japanese Sumo Association (JSA) has said that 19 of its wrestlers have tested positive for coronavirus, just days before the next major tournament is due to start.

The JSA added that 12 of those infected had been hospitalized but with only mild symptoms. It made no mention of any plans to cancel the tournament.

The World Health Organization (WHO) along with the Africa Centers for Disease Control and Prevention (Africa CDC) launched a network of 12 laboratories to reinforce genome sequencing of the virus that causes Covid-19.

The laboratories will be housed in various African countries. They will provide sequencing, data analysis and technical support services to the rest of the continent, the two organizations announced in a joint statement.

WHO regional director for Africa, Matshidiso Moeti, said “being able to not only track its evolution, but also assess the possible mutation of the virus is crucial to mounting an effective response."

The laboratory network will also inform the development of vaccines and treatment of Covid-19 in a way tailored to Africans, Moeti said. So far, 10 lineages of the virus have been identified in Africa, according to the statement.

Trump on coronavirus: 'I wanted to always play it down'

Suicide prevention amid coronavirus pandemic: 'We're still there for each other'

For those with mental health issues, the COVID-19 pandemic has been especially challenging. On this year's World Suicide Prevention Day, experts urge that physical distancing doesn't mean we're socially cut off.