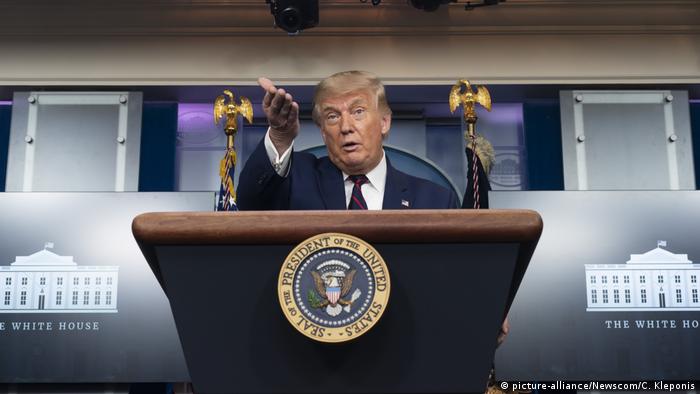 According to audio excerpts from several interviews by journalist Bob Woodward, US President Donald Trump was aware of the severity of the coronavirus as early as February but played it down to minimize the danger to the public.

In February, Trump told the renowned reporter, who helped uncover the Watergate scandal that toppled Richard Nixon in 1974: "You just breathe the air and that's how it's passed. And so that's a very tricky one. That's a very delicate one. It's also more deadly than even your strenuous flus."

Read more: US: Arizona Republican says 'I want my party back'

A few days later, Trump said in an interview with Fox News that the "virus is going to be fine," also often referring in February to concern over the virus as a "Democrat hoax."

"To be honest with you, I wanted to always play it down. I still like playing it down because I don't want to create a panic," Trump said in the tapes, released by Woodward in the runup to publication.

"The case count is going to be zero [in the US]… this is just like a flu," Trump subsequently said during a White House briefing on the virus on February 26, one of several similar comments.

Read more: Revealed: How the US gun lobby exploits the coronavirus pandemic

Reacting to the release of the recordings, Trump wrote on Twitter that the "quotes were made up," insisting the US was "doing GREAT!"

Trump's comments are published in Woodward's new book, Rage, which is set to be released on September 15. The book's release, along with some recordings of Trump's interviews, is timed to coincide with the height of the US election campaign, though Woodward has faced criticism for not releasing the information sooner. In an interview with The Associated Press on Wednesday, Woodward said he initially held on to the private comments as Trump so frequently said things that didn't "check out," and he needed time to be sure they were accurate.

The book and campaign have been overshadowed by the country's high COVID-19 caseload — in gross terms, the US has the most known cases and deaths of any country in the world.

Trump 'failed to do his job — on purpose': Biden

"He knowingly and willingly lied about the threat it posed to the country for months. While a deadly disease ripped through our nation, he failed to do his job — on purpose. It was a life or death betrayal of the American people," Biden said at a campaign event in Michigan.

Late Wednesday, Biden's campaign team released an ad featuring the recording of Trump's comments with the narrator saying "Trump knew all along."

The FDA has granted emergency approval of blood plasma from recovered coronavirus patients as a treatment for those battling the disease. President Donald Trump called the development "a historic breakthrough."