US: Arizona Republican says 'I want my party back'

Linda Rawles has been a Republican since she was 13. Now she's fighting against her own president, Donald Trump — and she isn't alone, as Ines Pohl reports from Arizona.

"Be careful at this stone. Do you see the holes?  A rattlesnake lives here," Linda Rawles warns. She says it's better to make a lot of noise to scare off the potentially deadly creature. That has also been Rawles' approach to the presidential campaign: Make as much noise as possible to keep the worst, or more of it, from happening this November.

The 61-year-old lawyer, like many in her age group, is doing all she can take make sure Donald Trump does not win reelection. She says that is because his rude, racist, misogynistic, xenophobic style has angered old allies. She says most of all, she is fighting the man who destroyed her political home.

Linda Rawles is a Republican through and through. Rawles, who lives with her husband in the Phoenix, Arizona, suburb of Carefree, began volunteering and working for the party at the age of 13. She always campaigned for party members on the municipal and state level. She even ran for Congress herself in 1994. She didn't win the seat, and one detects a mix of emotions ranging from pride to melancholy when she looks at her old campaign flyers. 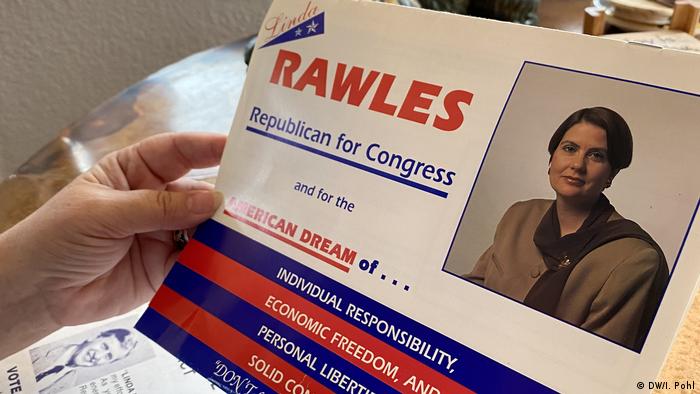 Rawles ran for Congress in 1994, but didn't win

"I still stand for the same values," she says. She believes in free-market principles, adding they are what America was founded on. She also believes in personal responsibility, "I think, a government should stay out of your wallet and out of your bedroom."

But she says nothing remains of such values after four years of Donald Trump: "He changed the party from a party of freedom to a party which worships dictators and destroys the rule of law." Rawles calls Trump a "psychologically disturbed sociopath."

For years, Republicans could always count on victory in Arizona. Election observers say that may not be the case this time around. That has a lot to do with the fact that Linda Rawles and women like her in the affluent suburbs will play an outsized role in determining who wins the White House this November.

One issue pushing that tendency is the coronavirus pandemic. The southwestern desert state has been hit hard by the infection. Official statistics show that more than 2,500 Arizonans have died of COVID-19. Republican Doug Ducey was also one of the first governors in the country to follow the president's advice and loosen lockdown measures in the state.

'Trump has blood on his hands'

Now, new infections in Arizona have skyrocketed. More and more hospitals are reporting capacity shortages; making adequate treatment impossible. COVID-19 patients are also being discharged too soon, after which they often then infect others in the general population. Morgues are also at overcapacity, making it difficult to cool bodies in the desert heat before they can be buried.

"Donald Trump has blood on his hands," Rawles says. "He ignored the virus, because he found it politically embarrassing and convinced our governor to open too soon and now people are dying."

Rawles says that is because good economic numbers are more important to Trump than more than 100,000 dead. But she scoffs, saying one can't separate the pandemic from the economy: "They go up and down together."

Throw the bums out

Rawles says more and more Republicans are becoming dissatisfied with the administration's crisis management. Still, it is almost impossible for them to turn away from Trump publicly.

"If you believed in something so hard, it is difficult to make this mental shift," Rawles says.

"It is hard to say: I am wrong. This takes a lot of courage."

Yet, equal to the admiration she has for those who once helped Trump and are now fighting him, is her disgust over party leadership, which continues to carry water for the president.

Read more: Mary Trump's book about the president a bestseller

She believes the only chance the Republicans have of finding their way back to their core principles is to get rid of the party's entire leadership. Rawles says she cannot trust those who still remain loyal to Trump because they clearly have a different moral compass.

"I want my party back," she says, adding that it ultimately comes down to what kind of a person one wants to be: One that follows the law and respects others, or one that puts children in cages at the Mexican border.

Time for a new party?

Although Linda Rawles doesn't agree with most of Joe Biden's policies, she is still going to vote for him this November. She says at least he is an upstanding person and mentally sound. Anything's better than Trump in her eyes. Still, she yearns to have a political home, a traditional party that represents her vision for the economy and one that is not as far left as the current Democratic party is.

But the question remains, will Republicans be able to overcome their existential crisis even if Trump loses? Linda Rawles has doubts, suggesting the party system may need to be overhauled, or a new party founded.

But that is all in the future, right now she just has to fight for all she's worth — and make a lot of noise. Just like when she approaches that rock in her front yard.