A WHO official has warned that the omicron variant may lead rich countries to once again hoard vaccines. Meanwhile, Slovakia is offering cash to people over 60 if they get vaccinated. DW has the latest. 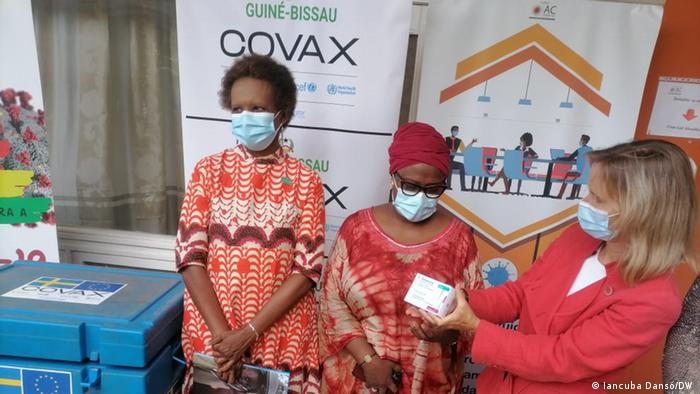 The World Health Organization (WHO) warned against renewed hoarding of vaccines by wealthy countries as the new omicron coronavirus variant spreads across the globe.

Although the number of doses being delivered to lower-income countries through the COVAX vaccine sharing program has increased in recent months — thanks in large part to India once again exporting the AstraZeneca vaccines it produces — there is a good chance that richer countries will return to reducing the supply of jabs to ramp up their own booster programs.

"As we head into whatever the omicron situation is going to be, there is risk that the global supply is again going to revert to high-income countries hoarding vaccine," WHO vaccine director Kate O'Brien said.

She also said that one of the major problems faced by COVAX was the donation of vaccine doses from wealthy countries with short shelf lives, which has resulted in high wastage rates.

The coronavirus pandemic is among the biggest crisis to have impacted children worldwide, according to a report by the United Nations Children's Fund (UNICEF). In less than two years, 100 million more children have fallen into poverty — representing a 10% increase since 2019.

It could take seven to eight years in the best-case scenario to return to pre-COVID-19 child poverty levels.

Biden's mandate requires all private companies with more than 100 workers to have their employees either vaccinated or undergo weekly testing from January 4.

However, the Senate vote does not mean the mandate will be overturned. Lawmakers in the Democratic-led House of Representatives would have to pass the resolution for it to take effect, which is unlikely to happen.

The European Medicines Agency (EMA) said on Thursday that bringing forward booster shots as early as three months after the second vaccine dose is "safe and effective" based on current data.

The announcement from the EU regulator came as several European countries are battling record numbers of cases as well as the appearance of the new omicron variant.

The EMA also said on Thursday that the new variant may cause milder disease based on early data.

Germany's new Chancellor Olaf Scholz will hold his first meeting with state leaders to discuss the COVID situation in Germany. German leaders agreed on a range of rules to curb a spike in COVID cases last week.

Germany's independent vaccine commission, STIKO, gave a provisional go-ahead to administer vaccines to children aged 5 to 11, especially for those with pre-existing conditions or who are around vulnerable people.

Other children can also receive the vaccine on a voluntary basis, according to the provisional announcement from the vaccine body.

Slovakia will pay people over 60 who have been vaccinated against coronavirus €300 ($399). Those who have received at least one dose by January 15 will receive €200 in cash.

The country's parliament approved the plan in an attempt to boost the lagging vaccination drive. Less than 47% of the population has been fully vaccinated.

South Africa has seen a relatively low hospitalization rate from coronavirus despite a surge in infections likely fueled by the new omicron variant.

Cases have increased by 255% in the past seven days, but only 6% of the country's intensive care beds are occupied by COVID-19 patients, an official for WHO Africa said on Thursday.

The data follows a series of anecdotal reports that infections with omicron have led to mainly mild symptoms.

Australia's New South Wales state, home to Sydney, recorded 420 new infections on Thursday, its biggest rise in COVID-19 cases in around two months. Most of the cases are linked to the delta variant.

Relatedly, dozens of people who attended a pub quiz in Sydney tested positive for the virus this week. They're waiting to see if they've been infected with omicron. Three cases of omicron have also been detected among people who went on a harbor party cruise.

Pakistan detected the first case of the omicron variant of the coronavirus on Thursday, according to local media reports.

The infection was detected in an unvaccinated patient being treated at a private hospital in Karachi, Pakistan's most populous city.