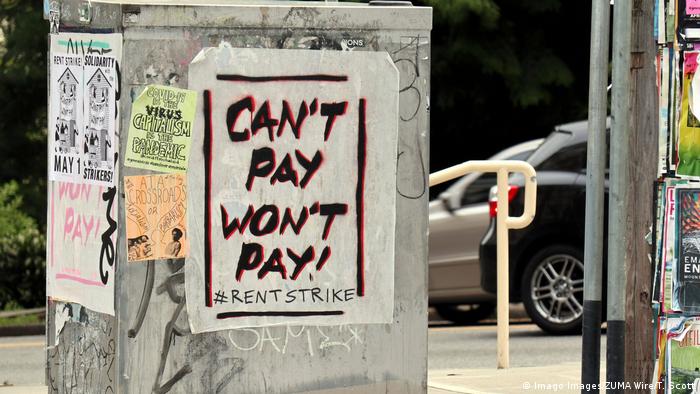 The US Centers for Disease Control and Prevention (CDC) issued a ban on evictions until October 3 across much of the country, where cases of the delta variant have been surging.

The move will help keep millions inside their homes at a time when states have been slow to release federal rental aid. An earlier moratorium had expired over the weekend, but mounting pressure led President Joe Biden to ask the CDC to reconsider the ban.

The measure halts evictions in counties with "substantial and high levels'' of virus transmissions, covering areas where 90% of the US population lives.

US homelessness in the pandemic: A crisis within a crisis

Meanwhile, the head of the World Health Organization (WHO), Tedros Adhanom Ghebreyesus, has urged countries to hold off on giving booster shots until at least a tenth of the population in all nations is vaccinated against COVID-19.

His remarks come as Germany, France, Israel and many other Middle Eastern countries have begun, or are set to begin, giving people an extra dose of COVID-19 vaccines. Health officials are trying to curb the spread of the highly transmissible delta variant of the coronavirus.

Here are other major coronavirus developments from around the world.

New York City Mayor Bill de Blasio said restaurants, gyms, and other businesses will require proof of vaccination from mid-September. It will be the first major US city to implement such a rule.

Even as cases rise, political leaders are encouraging mask mandates and vaccination instead of imposing restrictions.

The New York Times reported that the US Food and Drug Administration (FDA) is aiming to give full approval to the BioNTech-Pfizer vaccine in early September.

The FDA gave the vaccine emergency approval last year. Some believe a full approval could push more people to get the shot.

A study by Chilean health authorities showed that the Sinovac vaccine was 58.5% in preventing symptomatic illness among Chileans who had received the jab.

The "real world" data also found the BioNTech-Pfizer shot to be 87.7% effective, whereas the Oxford-AstraZeneca vaccine was 68.7% effective. Chile has now vaccinated more than 60% of its population.

Toy maker Mattel has created a model of its iconic Barbie doll in honor of Sarah Gilbert, co-creator of the Oxford/AstraZeneca coronavirus vaccine.

"My wish is that my doll will show children careers they may not be aware of, like a vaccinologist," said Gilbert, adding that she found the news "very strange." Mattel has previously created dolls inspired by other women in the sciences, such as US healthcare workers Amy O'Sullivan and Audrey Cruz,  Canadian campaigner Chika Stacy Oriuwa, Brazilian researcher Jaqueline Goes de Jesus, and Australian medic Kirby White.

Health authorities in France have imposed an emergency plan on Corsica, while popular coastal destinations reintroducing a mask mandate to combat rising infections.

Research by the Imperial College London found fully vaccinated people to be at a 50-60% reduced risk of infection from the delta variant. The findings were part of a large English coronavirus prevalence study.

"We're looking at effectiveness against infection amongst a random sample of the general population, which includes asymptomatic individuals," said epidemiologist Paul Elliot, who led the study.

Japan is reconsidering its controversial policy of asking COVID patients with less severe symptoms to isolate at home rather than the hospital.

"Unless we have enough beds, we can't bring people into hospitals. We're acting pre-emptively on this front. If things don't turn out as we expect, we can roll back the policy," said health minister Norihisa Tamura while addressing the parliament.

Thailand reported 20,200 new cases on Wednesday, its highest daily rise during the pandemic so far. Authorities have imposed a nighttime curfew and other restrictions in response to the surge.

Macau plans to test its entire population of 600,000, after four new cases were found. The Chinese-ruled gambling hub has set up 41 testing stations across the city which will test people round the clock for at least three days.

Meanwhile, China reported 71 domestic cases on Wednesday, its highest number in six months. Health authorities have been pushing mass testing campaigns, as infections of the delta variant are surging.

Australia recorded one of its youngest COVID fatalities when a man in his twenties died of the virus during home isolation.

The man, who was unvaccinated, died 13 days after testing positive. He lived with one other person, who has been hospitalized.

The gender disparity in India's inoculation program has narrowed, as women have now received about 47% of the 481 million vaccine doses administered so far.

The country started giving doses to pregnant women in July, and authorities have been working on the ground to dispel rumors about the effect of vaccines on fertility. The health ministry said a communication strategy was in place to reach out to more women.

Israel will now require people entering from 18 countries, including the US, Germany, France, the Netherlands, Italy and Ukraine, to quarantine for 14 days regardless of whether they have been vaccinated.

But travelers who test negative after seven days can be released earlier. Israel had already imposed these restrictions on people arriving from 24 countries, including the UK, Brazil, and India.

Vaccines from both drugmakers have been approved in the EU for children from 12 to 17 years of age. Elsewhere, Australia continues its battle against the delta variant. Follow DW for the latest.