Even though the government approved funding to be passed on to states for protecting renters, the money has been slow to reach people. Now, they're faced with the threat of eviction without backup. 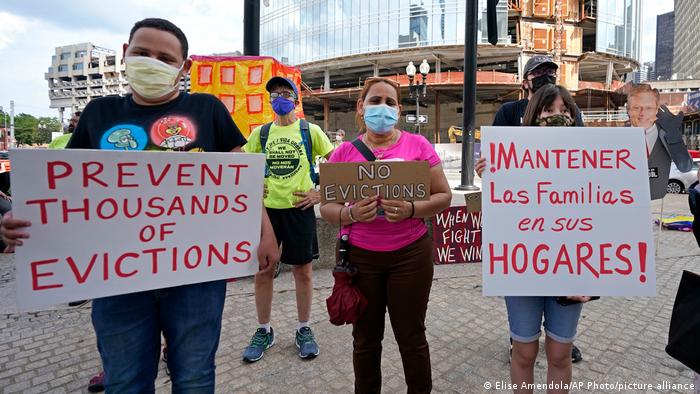 Pressure is mounting on US lawmakers to extend a moratorium that barred landlords from evicting certain tenants who could not pay rent during the pandemic.

The eviction ban lapsed on Saturday at midnight, putting more than 3.6 million Americans at risk of being homeless.

The Centers for Disease Control and Prevention (CDC) had ordered the moratorium to prevent a surge in COVID cases in 2020. It has been extended several times since.

Several progressive Democratic lawmakers camped outside the Capitol to draw attention to the issue.

They called out their colleagues for failing to act as Congress adjourned for summer vacation.

The White House on Thursday called on Congress to extend the protection, especially in the backdrop of a rise in cases linked to the delta variant.

The Supreme Court said last month that congressional action would be needed to extend the order past the end of July.

US President Joe Biden's move to let the measure expire at the last minute has sowed discord within his party. Biden defended the decision by saying the Supreme Court decision didn't leave many other options.

Democratic lawmakers have criticized the president for not taking executive action to push it through.

On Friday, Biden urged local governments to "take all possible steps" to make sure federal funding disbursed to states makes it to the hands of renters.

Unlike other pandemic-related aid that was distributed directly from the federal government, like stimulus checks, states are responsible for ensuring the assistance reached tenants.

The Treasury Department said that only $3 billion (€2.53 billion), of the $25 billion that has been disbursed so far, reached households as of June.

On Friday, Democratic congresswoman Maxine Waters produced a draft bill that would require the CDC to continue the ban until the end of the year.

The bill was discussed at an urgent meeting of lawmakers.

Congresswoman Cathy McMorris Rodgers, a top Republican on another panel handling the issue, said the Democrats' bill was rushed.

House Speaker Nancy Pelosi implored colleagues to consider the bill, calling it a "moral imperative" to protect residents from eviction.

Several lawmakers from the progressive wing of the Democratic Party staged a protest on Friday and Saturday, camping out overnight on the steps of the US Capitol building.

Representative Cori Bush, who has experienced homelessness as a young mother of two in her 20s, said she didn't "plan to leave before some type of change happens."

Several colleagues including Ilhan Omar and Ayanna Pressley joined her outside the Capitol.

"I don't want anyone else to have to go through what I went
through, ever," Bush said during a tearful interview.

Experts expect some areas in the US are likely to see a rise in evictions as early as Monday.

The Treasury has said regional authorities in the US can use federal COVID relief funds to offer people $100 in return for getting vaccinated. The US has ample reserves, but a robust anti-vaccine movement.