The Treasury has said regional authorities in the US can use federal COVID relief funds to offer people $100 in return for getting vaccinated. The US has ample reserves, but a robust anti-vaccine movement. 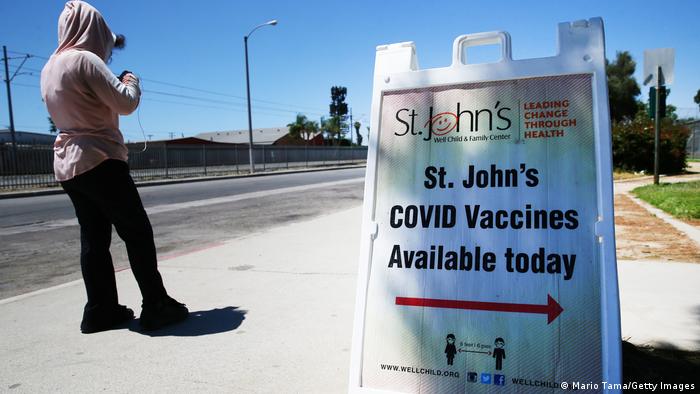 US President Joe Biden on Thursday told states and towns that they could offer residents $100 (roughly €84) to get vaccinated against COVID-19, as inoculation rates slowed down across the country.

Although the decision does not rest with the White House, the US Treasury Department made it clear that local authorities could use federal COVID relief funds to offer the incentives, essentially meaning it would not cost them anything.

"I know that paying people to get vaccinated might sound unfair to folks who have gotten vaccinated already. But here is the deal: if incentives help us beat the virus, I believe we should use them," Biden said.

The new cash incentive is part of Bidenꞌs latest plan to increase the national level of protection from the pandemic as the delta variant drove a new wave of infections.

It also comes as the US faces a rather unusual problem in global terms: it has ample vaccine doses to go around but also a fairly high proportion of the population, by the standards of wealthier countries, who are hesitant to take the vaccine.

What moves are being taken?

The White House noted the success of the $100 cash reward introduced by the Kroger grocery chain. It pushed vaccination rates among employees from 50% to 75%, and Biden hopes the same could happen at national level.

Health services in the states of Ohio, New Mexico and Colorado have tried out similar ideas.

The president said authorities can use leftover funds from the $1.9 trillion coronavirus rescue package to pay out the cash.

"I think the $100 is a good start," Washington-based epidemiologist Eric Feigl-Ding told DW. "Weꞌve tried nearly every single carrot that we have to get people vaccinated and people are just not budging.

"We have to stick to mandates or vaccine passes."

How will federal employees be affected?

Another main thrust of the latest plans is to introduce new testing, masking and distancing rules for 4 million federal workers and onsite contractors who do not vaccinate.

Federal employees who have not been vaccinated will have to wear face masks, get tested once a week, be physically distanced and will be restricted from traveling.

The White House is asking the Pentagon to consider making the vaccine mandatory for members of the US military, who are also federal workers. But military chiefs said that, while the vaccines are widely recognized as safe and effective, this will only happen when the Food and Drug Administration give vaccines their final all-clear.

Biden appealed for the issue not to become partisan. "This is not about red states and blue states. It's literally about life and death," he said.

With around 60% of US citizens fully vaccinated so far, Biden has started to set new vaccination goals for the coming weeks and months, looking ahead to another hard winter.

Lawrence Gostin, a global health law professor at Georgetown University Law, believes the hassle associated with these new restrictions at work will push many to take the jabs.

"People would much rather roll up their sleeves and get a jab, than undergo weekly testing and universal masking," Grostin told The Associated Press news agency. "In many ways, this is really not a mandate, it's giving workers a choice"

But there has been opposition to mandatory testing among unions and even the Federal Law Enforcement Officers Association (FLEOA), which represents 30,000 federal officers and agents.

"Forcing people to undertake a medical procedure is not the American way and is a clear civil rights violation no matter how proponents may seek to justify it,'' FLEOA President Larry Cosme told AP.