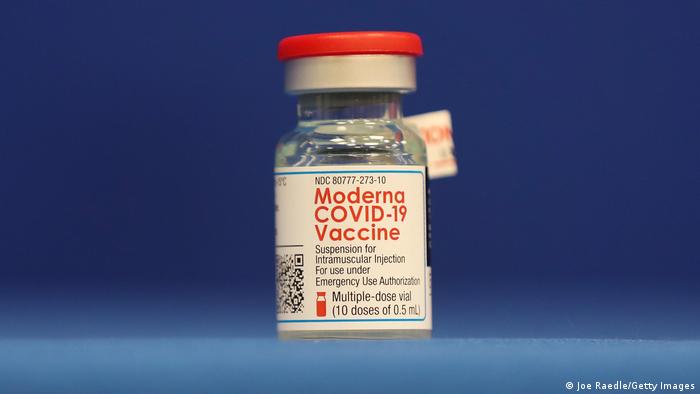 When it comes to helping the Palestinians, critics have said Israel is doing too little, too late

Israeli media reported that the country had transferred doses of Moderna vaccine doses to the West Bank on Monday, as part of an effort to immunize medical staff there.

Israel's main liaison office with the Palestinians, COGAT, said it had "coordinated the passage of a first shipment," via a crossing point near the city of Ramallah.

The move to deliver vaccines follows criticism that, as an occupying power, Israel has done nothing to help Palestinians despite plowing ahead with its own much-praised vaccination program.

The delivery was part of a total of 5,000 doses approved for this purpose, COGAT said in a statement. Palestinian critics had urged the Palestinian Authority not to accept any coronavirus shots that were offered by Israel. Palestinian officials declined to confirm or deny the arrival of the vaccines.

Israel argues that, according to the terms of peace deals singed in the 1990s, the Palestinian Authority is responsible for the health of some 2.8 million people living in the West Bank.

In the Gaza Strip, controlled by Islamist group Hamas, local authorities are not expected to publicly collaborate with Israel on any vaccination effort for the two million people living there.

Pharmaceutical company AstraZeneca has agreed to supply 9 million additional doses of its vaccine to the European Union during the first quarter, the bloc's executive arm said. The new target of 40 million doses by the end of March is still only half what the British-Swedish company had originally aimed for before it announced a shortage over production problems.

Germany's Chancellor Angela Merkel says the government had received the assurances it needed to renew a promise to offer all Germans a coronavirus vaccination by the end of the summer.

The "statement that we will be able to offer every citizen a vaccination by the end of the third quarter" can be maintained, the chancellor said. This promise was possible despite delays to some deliveries, she said, because the government had received reassurances about the vaccine stocks that would arrive per quarter.

Germany's Robert Koch Institute for infectious disease control and prevention meanwhile has reported 5,608 new infections and 175 deaths in the past 24 hours.

The current seven-day coronavirus incidence, which records new cases per 100,000 within the time period, is now at 91 cases.

German firm BioNTech and US company Pfizer have promised to deliver up to 75 million more coronavirus vaccine doses to the EU in the second quarter of 2021, the company's head Sierk Poetting wrote in a statement on Monday.

BioNTech-Pfizer now plan to manufacture around 2 billion doses of the vaccine against COVID-19 by the end of the year. This is up from the planned initial 1.3 billion.

Another German company, Bayer, is set to extend its current partnership with CureVac to include manufacturing of the smaller firm's mRNA vaccine against coronavirus in 2022.

"Following discussions with the German government, it has become clear that current manufacturing capacities for vaccines need to be increased, particularly for potential variants of the SARS-CoV-2 (COVID-19) virus," Stefan Oelrich, president of Bayer's pharmaceuticals division, told reporters.

The company wants to produce 160 million doses in the first 12 months.

Poland has found its first case of COVID-19 in one of the country's 350 mink farms, the agriculture ministry said.

Authorities in several countries began mass culls of the animals due to fears of a mutated strain of the illness being transmitted to humans.

Japan is expected to extend a state of emergency to fight the spread of the virus this week for Tokyo and other areas, as hospitals remain overburdened, despite a decrease in cases since the peak of the pandemic.

The government will decide on the extension after a meeting of its expert panel this week, public broadcaster NHK said. Japan has recorded over 386,000 infections and more than 5,600 deaths since the start of the pandemic.

Vietnam has shut schools in 22 provinces ahead of the Lunar New Year "Tet" holiday and ended a ruling Communist Party congress early on Monday.

The country has kept cases low at 1,850 and 35 deaths overall due to targeted mass testing and strict quarantining. But authorities want to clamp down on a new cluster detected in northern areas last week.

In the US, a group of 10 Republican senators pitched their own version of coronavirus relief plan in a letter to President Joe Biden. The Republican alternative to Biden's $1.9 trillion plan (€1.6 trillion), would be far smaller, at just $600 billion.

Biden invited the letter signatories to meet with him Monday and discuss their plan, according to White House Press Secretary Jen Psaki,

But "with the virus posing a grave threat to the country, and economic conditions grim for so many, the need for action is urgent, and the scale of what must be done is large," Psaki said. The US has recorded over 26 million cases and 452,000 deaths since the start of the pandemic.

Angela Merkel and Germany's 16 state premiers decided to keep the lockdown in place until at least mid-February. The new, tougher measures would also see people wearing medical masks in shops and on public transport.

A new mechanism would allow countries to halt exports of coronavirus vaccines that the EU says belong to its citizens. The World Health Organization has criticized the move.