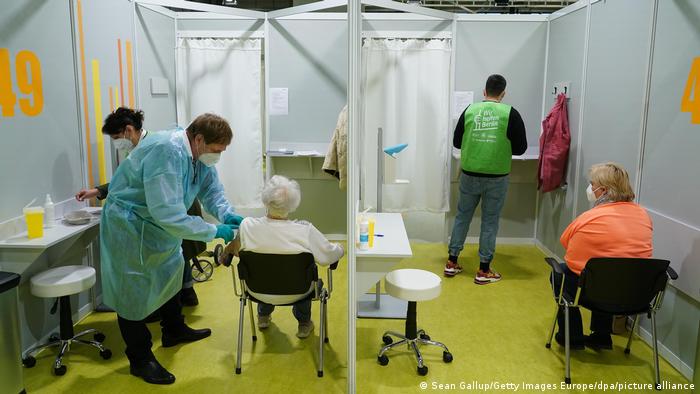 German Chancellor Angela Merkel has said coronavirus vaccines may be needed for "many years to come."

"It's similar to the flu vaccine, where you re-vaccinate against the new mutation of the virus every time," Merkel said in Berlin after a top-level meeting on Germany's vaccination campaign on Monday.

Merkel added that her government had received the assurances it needed to renew a promise to offer all Germans a coronavirus vaccination by the end of the summer.

The "statement that we will be able to offer every citizen a vaccination by the end of the third quarter" can be maintained, the chancellor said. This promise was possible despite delays to some deliveries, she said, because the government had received reassurances about the vaccine stocks that would arrive per quarter.

This pledge applied, Merkel said, even if — contrary to expectations — the two pharmaceutical manufacturers Johnson & Johnson and CureVac did not receive approval for the vaccines they have developed. Should those firms be added, there would be a larger supply.

Merkel announced that the federal and state governments were proposing a "national vaccination plan" to streamline the immunization process.

Merkel said there were various reasons for the slower pace of vaccination in Germany compared to other countries. They included a relatively limited production capacity compared with the US, and the fact that the EU had spent a long time negotiating liability issues.

In addition, the bloc had not opted for emergency approval of vaccines. "For good reasons," she said. "After all, this is also about trust."

The chancellor and the country's 16 state premiers had met on Monday to discuss possible improvements to the country's vaccination program.

Several federal ministers, and representatives of both the vaccine manufacturers and the  European Commission  took part in a videoconference. Several state premiers had demanded clarity on both the quantity and timing of vaccine deliveries, following widespread confusion.

Vaccine boost for Germany and the EU

German firm BioNTech and US company Pfizer have promised to deliver up to 75 million more coronavirus vaccine doses to the EU in the second quarter of 2021, the company's head Sierk Poetting wrote in a statement on Monday.

BioNTech-Pfizer now plan to manufacture around 2 billion doses of the vaccine against COVID-19 by the end of the year. This is up from the planned initial 1.3 billion.

What do Germans think about vaccines?

Another German company,Bayer, is set to extend its current partnership with CureVac to include manufacturing of the smaller firm's mRNA vaccine against coronavirus in 2022.

"Following discussions with the German government, it has become clear that current manufacturing capacities for vaccines need to be increased, particularly for potential variants of the SARS-CoV-2 [COVID-19] virus," Stefan Oelrich, president of Bayer's pharmaceuticals division, told reporters.

The company wants to produce 160 million doses in the first 12 months.

Ahead of the meeting, Health Minister Jens Spahn said Germans should limit their expectations for the time being.

The realistic assessment, he said, was that there would be a shortage of vaccines for several more weeks. Real progress was more likely in the second quarter of the year, he said.

Spahn added that procurement, production and scheduling, were all areas where "things can be done even better."

Meanwhile, North Rhine-Westphalia's State Premier Armin Laschet had a similar assessment and called for stocktaking on improvements in COVID-19 vaccination in Germany to be "realistic."

Laschet, recently elected leader of Merkel's conservative Christian Democrats (CDU), cautioned against the idea that vaccine production could be ramped up in only a week.

For Germany to meet its promise to vaccinate everyone by the end of the summer, the country would "have to make a great effort,"  Finance Minister Olaf Scholz told Süddeutsche Zeitung on Sunday.

Meanwhile, Germany's Robert Koch Institute for infectious disease control and prevention has reported 5,608 new infections and 175 deaths in the past 24 hours.

The current seven-day coronavirus incidence, which records new cases per 100,000 within the time period, is now at 91 cases. Germany wants to get that infection rate down to below 50.