India has seen its biggest daily increase in COVID-19 cases so far, with the country's most prosperous state announcing strict restrictions. Follow DW for the latest. 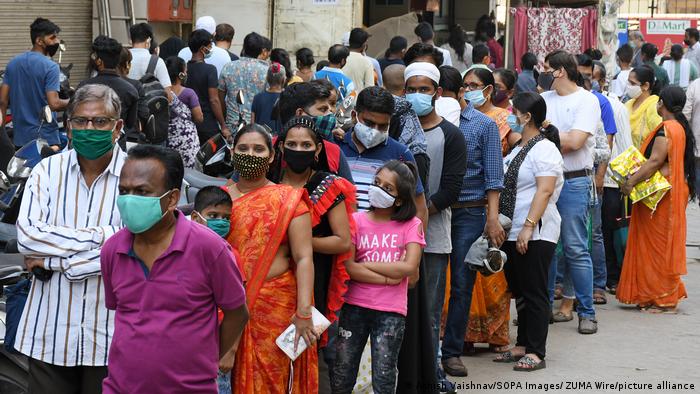 The news came as the country's richest state, Maharashtra, which accounts for more than half of the new cases, introduced stringent regulations.

There will also be a complete lockdown on weekends, Nawab Malik, a minister in the state government, told reporters.

A day earlier, Bollywood star Akshay Kumar confirmed he had tested positive for COVID, becoming the latest Indian celebrity to contract the virus.

The government in the Philippines extended a lockdown by another week on Monday, after an alarming spike in coronavirus infections.

As cases surge, the pandemic has started to overwhelm many hospitals in the capital and other more outlying regions. Some hospitals announced over the weekend that they could no longer accept walk-in patients as emergency rooms operate at twice their capacity.

President Rodrigo Duterte placed Metropolitan Manila and four other provinces — a region of more than 25 million people — back under lockdown last week.

In China, the southwestern city of Ruili, which borders Myanmar, has now seen cases top 100. The outbreak is something of an anomaly, with the country having almost eliminated local transmission of the disease.

The news comes as authorities launch an aggressive campaign to vaccinate all 300,000 residents of the city.

In Australia, hundreds more family doctors are set to join the national coronavirus vaccination program. The rollout is gathering pace with the number of clinics taking part doubling from 1,500 to 3,000 by the end of the week.

The development comes after criticism that the country's vaccination program is moving far slower than had been planned.

In the United Kingdom, Prime Minister Boris Johnson was scheduled to set out plans to reopen the economy and eventually relaunch international travel.

With much of Europe entering new lockdowns to tackle rising case numbers, Johnson was expected to give an update on his staggered plan to ease restrictions in the coming months on Monday. The opening up would prove a huge boost for the UK, which has been one of the worst-hit countries during the pandemic.

On Sunday, there was news that people in the UK might soon be able to attend football matches and nightclubs with the appropriate documentation showing vaccination or negative COVID-19 status.

In Germany, the number of confirmed coronavirus cases increased by 8,497 to a total of 2,893,883, according to figures released Monday by the Robert Koch Institute (RKI) for infectious diseases. Reported fatalities rose by 50 to 77,013, the tally showed.

On Sunday, German Health Minister Jens Spahn said people who have been fully vaccinated might soon be able to regain personal freedoms and return to a more ordinary life.

The country's vaccine program has faced criticism for its lack of pace, but on Thursday the minister announced a ramping up of the rollout.

Interior Minister Horst Seehofer said on Sunday that coronavirus rules should be made uniform across Germany. The call was echoed by Bavarian state premier Markus Söder, after some regions held back on "emergency brake" measures.

Lisbon imposed a general lockdown in the middle of January and closed schools a week later. Primary schools reopened in March.