People in the UK might soon be able to attend football matches and nightclubs with the appropriate documentation. Follow DW for the latest. 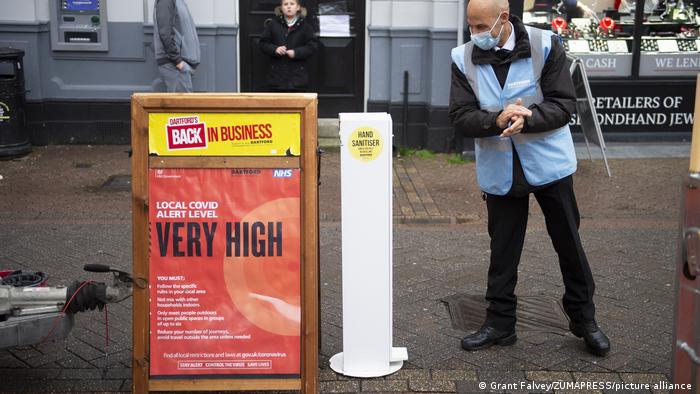 Nearly 31.5 million people in the UK have so far received at least one vaccine dose

With UK vaccination numbers growing, the government is developing a plan that would allow some people to attend sports events or parties with large groups.

The authorities are to issue identification that would show if the carrier had been vaccinated or has antibodies or a recent negative test. Based on this, they would be allowed to visit various public events.

The "COVID status certification" project is set to be tested from mid-April, UK authorities said. The test would include events such as the final of England's FA Cup, a comedy show and the World Snooker Championships. Prime Minister Boris Johnson is set to provide more details on Monday.

Germany is considering giving more freedoms to fully vaccinated people, according to Health Minister Jens Spahn. Those people could soon be able to travel, visit shops or go to the hairdressers without following the anti-pandemic restrictions, Spahn told the mass-circulation Bild am Sonntag.

Separately, Germany's official Robert Koch Institute announced that the Netherlands would be classified as a high-risk zone. Travelers arriving from the Netherlands would have to show a negative virus test before entering Germany, and then go into quarantine. Exceptions could be made for people commuting to work.

Berlin police busted an illegal party with 47 guests. Some of the guests were reportedly hiding in a room that was separated from the main area by a "secret door" allegedly made to look like a closet.

In the Vatican, Pope Francis said it was "scandalous" that wars are continuing even during the coronavirus pandemic. In his Easter message, the head of the Catholic Church called on the international community to ensure that vaccines reach the poorest countries.

France expects its public debt to rise and deficit to deepen as the prolonged pandemic dashes hopes of a quick economic recovery, according to Finance Minister Bruno Le Maire.

A report about luxury Paris restaurants secretly violating lockdown rules prompted an official probe. TV channel M6 previously aired a story showing a party at a high-end venue with the attendees not wearing masks or following social distancing rules. Paris prosecutors said they aim to determine "who the organizers and participants may have been" as well as if the party was indeed held during lockdown.

The Czech Republic will end its coronavirus state of emergency on April 11, as the lawmakers rejected the government's initiative to keep it in place until April 27. Taking to tn.cz news site, Prime Minister Andrej Babis said that restrictions on travelling between the country's regions and the nighttime curfew would not be enforced past next week.

India's richest state, Maharashtra, announced that it would impose strict restrictions after a jump in infections. Malls, cinemas, bars, restaurants, as well as temples and other places of worship, will all close and the authorities would impose a nighttime curfew.

Bollywood star Akshay Kumar became the latest celebrity to announce that he had tested positive for the coronavirus.

Libya received its first shipment of COVID-19 vaccines. The country's interim prime minister, Abdulhamid Dbeibeh, described the shipment of over 101,000 doses of Sputnik V vaccines from Russia as "the first drop of rain."

"Thank God, we are able to supply the first batch," he wrote on Twitter.

In the Gaza Strip, officials reported a record jump in infections, with 1,628 cases registered in the previous 24 hours. The pandemic is exacerbating health risks in the densely populated area where some 2 million people live under poor economic conditions and insufficient medical care.

The US government put pharma giant Johnson & Johnson in charge of the Emergent BioSolutions plant in the state of Maryland, after the facility ruined 15 million doses of its COVID-19 vaccine, a senior US official said. Johnson & Johnson confirmed it was "assuming full responsibility for the site."

According to media reports, the plant made a mistake, conflating ingredients for the Johnson & Johnson vaccine and the jab made by Anglo-Swedish AstraZeneca. The change will reportedly see the plant make only the vaccine developed by the US company in the future.