Germany's public health body said the country has recorded over 50,000 new COVID cases within the past 24 hours. Meanwhile, an Australian company has recalled millions of tests shipped to the US. DW has the latest. 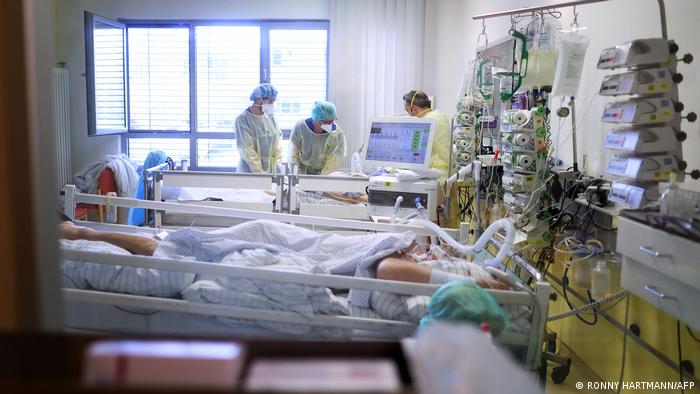 German health officials are alarmed by the surge in cases

The RKI said Germany reported 50,196 new cases within the past 24 hours. The public health body also registered 235 new deaths from the virus.

The institute previously reported on Wednesday 39,676 new cases, which was also a record at the time.

Virologist Christian Drosten said the country could witness as many as 100,000 more deaths from the virus and called for urgent action. Chancellor Angela Merkel is pushing for talks with state premiers to craft a "quick and unified response" to the crisis.

Some parts of the country are putting more pressure on unvaccinated citizens. On Monday, Berlin will require a certificate of vaccination or recovery for people entering public venues such as restaurants, gyms and hairdressers.

Here's a look at the latest coronavirus-developments in other parts of the world:

A medical tech manufacturing company in Australia, Ellume, has recalled 2.2 million coronavirus tests shipped to the US due to reports of false positives. The recall was announced by the US Food and Drug Administration (FDA).

The agency categorized the recall as "Class I," which is the most serious type of recall. "Use of these tests may cause serious adverse health consequences or death," the FDA said.

Ellume last month had issued a voluntary recall of 195,000 tests due to higher-than-expected rates of false positives.

Ellume had shipped around 3.5 million tests to the US in total.

US President Joe Biden's administration said over 900,000 children from the ages of five to 11 are anticipated to have received their first vaccine jab by the end of Wednesday. The US Food and Drug Administration (FDA) recently greenlit the BioNTech-Pfizer shot for that age group.

Officials in the province of Ontario, Canada are backtracking on a plan to lift restrictions on large public social gatherings. The province was expected to lift capacity limits on venues such as night clubs and bars by November 15.

The province has witnessed a rise in coronavirus cases in recent weeks.

"To protect our hard-fought progress and ensure we can continue to manage COVID-19 for the long-term, more time is needed before we can take the next step forward in our reopening plan," the Ontario officials said in a statement.

The US Secretary of State Antony Blinken said the country would be providing the single-dose Johnson & Johnson shots to areas of conflict and other humanitarian distress, under the Covax scheme.

"We're eager for people in these difficult circumstances to get protection against COVID-19 as soon as possible. We know the urgency of this fight. We know what we need to do to stop the pandemic. Now, we've got to do it," he said.

A US Federal judge put a stop to the enforcement of Texas' ban on mask mandates in the state's schools on Monday. Judge Lee Yeakel ruled that the ban ordered by Governor Greg Abbott violated a federal law protecting disabled students' access to public education.

A disability rights group had argued that differently-abled children are more vulnerable to COVID, and the ban prohibited accommodations for them.

A government advisory council said Malaysia will reopen its borders to tourists by January 1, 2022 at the latest. Details of the decision are still being discussed.

After ramping up vaccination, Malaysia has managed to inoculate more than three quarters of its population. The economy has been gradually opening up in recent weeks.

Malaysia this week announced it would launch a vaccinated travel lane with neighboring Singapore on November 29, allowing quarantine-free travel for inoculated people between both countries. A similar travel corridor is also going to be set up with Indonesia.

Authorities in Beijing have sealed off a mall and locked down several residential complexes due to a recent flare-up of COVID cases. The Raffles City mall in Dongcheng district was closed after a close contact of a person with COVID was said to have visited the mall.

Six new cases were found in Beijing's central districts of Chaoyang and Haidian. China is seeing a spike in cases due to domestic travel in the past month.

Around 3.4 million passengers passed through Frankfurt airport in October, marking its busiest month since the beginning of the pandemic.

The figure was still 47.2% lower than October 2019, before the pandemic. Fraport CEO Stefan Schulte now expects close to 25 million passengers at Frankfurt Airport this year.

Romania saw yet another fire at a hospital for infectious diseases in the southern city of Ploiesti, killing two people. A nurse suffered burns in the fire.

This is the fourth such fire to blaze up in the EU member state since the start of the pandemic, which suffers from poor health infrastructure. The head of the hospital told media that the building had undergone renovations the previous year and that its electrical and oxygen systems had been verified recently. However, the building did not have the necessary fire safety authorization from the fire department.

Biden: US to donate 500 million vaccine doses to poor countries