It is the highest number of infections in a single-day period since widespread testing was introduced in the country. Meanwhile, Spain faces a new state of emergency. Follow DW for the latest. 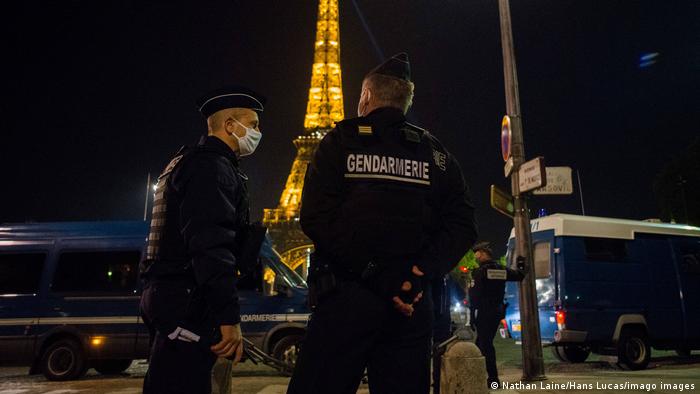 France racked up 52,010 new coronavirus infections in the past 24 hours, health authorities said on Sunday evening. Some 17% of people who were tested during mass testings on Sunday were found to have the virus, Sunday's data showed.

Case numbers have been increasing dramatically for weeks, with several records announced over the past seven days alone.

France, like much of Europe, has introduced a widespread testing program, reaching more people than when the virus first broke out. However, the European Center for Disease Control and Prevention states that increased testing "is not the only reason for the increase of COVID-19 cases," citing the relaxation of preventative measures.

In response to the increase, the French government brought in new restrictions for two-thirds of the country from Saturday. Under the new rules, people can only go out at night if they have good reason to do so. The regulation applies in 54 French administrative regions and in the overseas collectivity, French Polynesia in the South Pacific.

In Germany, President Frank-Walter Steinmeier, vowed the virus "will not take our future from us," while acknowledging that the fight against COVID-19 demanded society's complete focus at the moment. He made the comments in a speech during the ceremony for the German Environment Award.

People should not forget about "humanity's other great challenges," such as protecting resources and the environment, he said. Climate change, stressed Steinmeier, is not taking a break during the pandemic.

In Spain, Prime Minister Pedro Sanchez has declared the country's second state of emergency, imposing a curfew in all regions except for the Canary Islands. The curfew lasts from 11 p.m. to 6 a.m. local time (2200 to 0500 UTC/GMT ) with regional leaders allowed to vary the times, provided the measures are stricter. They will also be allowed to shut regional borders, and public gatherings will be limited to six people from separate households.

Countries across the continent are continuing to report record daily infection figures.

Hungary logged over 3,000 cases for the first time Sunday, the government said. It's the country's highest single-day tally, bringing its total number of infections to 59,247. Hungary also reported 35 new deaths, with 1,425 fatalities in total.

The United Kingdom is considering reducing its mandatory quarantine period for people exposed to COVID-19. "Teams are looking at what we can do around those isolation periods, this will be scientifically led," Northern Ireland Minister Brandon Lewis told Sky News on Sunday, following reports the period could be shortened to seven or 10 days.

Italy is tightening restrictions after a record number of new cases. Cinemas, theaters, gyms and swimming pools must close under new rules announced by Prime Minister Giuseppe Conte that will come into effect Monday. Bars and restaurants, meanwhile, must stop serving at 6 p.m. Italy reported nearly 20,000 new cases over a 24-hour period on Saturday.

In the United States, the top aide to Vice President Mike Pence has tested positive for coronavirus. A spokesman for the vice president said Pence and his wife had tested negative, though Pence's chief of staff, Marc Short, tested positive on Saturday. Pence is set to continue his campaign schedule, but as a "close contact" of an infected individual, he will be monitored for symptoms, per CDC guidelines for essential workers in the US.

Meanwhile, the top US infectious disease expert, Dr. Anthony Fauci, said it would not be clear whether a COVID-19 vaccine was safe and effective until early December. He said that widespread vaccination is unlikely until later in 2021.

"When you talk about vaccinating a substantial proportion of the population so that you can have a significant impact on the dynamics of the outbreak, that very likely will not be until the second or third quarter of the year," Fauci told the BBC.

His remarks come as the US reported a record number of new coronavirus infections for the second day in a row, with nearly 89,000 more people testing positive.

Read more: US could see half a million coronavirus deaths by end of winter, study warns

In China, the western region of Xinjiang is closing schools for a week and conducting citywide tests after discovering a case of COVID-19 in Kashgar. A 17-year-old girl tested positive for the virus on Saturday during a regular inspection but reported no symptoms. It's the first local infection on mainland China since October 14.

Xinjiang authorities said close contacts of the infected person had been isolated and a nucleic acid test had been launched covering Kashgar's 700,000 inhabitants. More than 300,000 people had been tested by Sunday.

Victoria state in Australia has held off on easing coronavirus restrictions in Melbourne after an outbreak in the north of the city. Victoria Premier Daniel Andrews said the state was awaiting the results of 3,000 people tested in Melbourne over the past 24 hours, describing it as a "cautious pause," but not a setback. He said authorities wanted to rule out the possibility of community transmission linked to the cluster.

Melbourne has had restrictions limiting retail business in the city since early August, with 5 million people living under stay-at-home orders. Andrews warned the latest outbreak threatened to push the reopening date closer to November 1. "I know everyone will be disappointed we're not making that move today," he said. "I am too."

With more than 42,000 new cases, France's overall tally has crossed the 1 million mark, just as curfews are widened. The Netherlands, Croatia and Bosnia-Herzegovina have all seen daily records. Follow DW for the latest.