Hundreds of people in the southern Italian city of Naples protested a planned regional lockdown and a curfew amid a major spike in coronavirus infections. Police have so far arrested and charged two people. 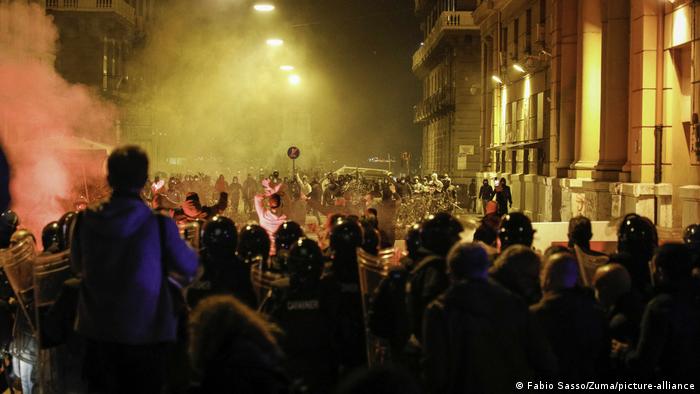 Two people were arrested during the clashes and charged with resisting arrest, a police spokeswoman told the German Press Agency (DPA) on Saturday, adding that two police officers were slightly injured by demonstrators.

"It is absolutely clear that it was not a spontaneous protest, but premeditated actions, almost totally organized by fringe football hooligans, criminal groups and political extremists," he added.

A SkyTG24 news reporter and a cameraman were also assaulted.

Demonstrators marched through the streets of Campania's regional capital and gathered in front of the seat of the regional government, throwing projectiles at police and setting fire to rubbish bins until the early hours of Saturday.

Protesters chanted slogans like "freedom!" and carried signs that read: "If you close, you pay. "

Turning the coronavirus crisis around in Italy

Calls were made on social media to challenge Campania's decision to impose a stricter curfew that took effect ahead of the weekend. The southern Italian region had already closed most of its schools and imposed a nighttime curfew.

Campania Governor Vincenzo De Luca announced Friday the region would go into lockdown after Campania recorded at least 2,280 daily cases, a nearly 50% increase from the 1,541 reported a day earlier.

"We are on the verge of tragedy, we need a national lockdown," De Luca said. "We will proceed toward closing everything."

He proposed a shutdown of up to 40 days to contain the virus in the region.

Daily cases in Italy have jumped sevenfold since the beginning of October, soaring to 19,143 on Friday and raising concerns that the pandemic is escalating out of control.

Daily deaths have also been climbing all month, totaling 91 on Friday, but they have so far been fewer than the height of the first wave in the spring when the peak of daily deaths topped 900.

Italian Prime Minister Giuseppe Conte said he wanted to avoid another national lockdown that could hurt the country's weakened economy, arguing that the economic and social cost would be too high. Regional leaders, however, can establish their own rules when it comes to lockdowns.

Italy, the first European country to be badly hit by the virus, has now registered nearly 500,000 cases and 37,000 deaths.

Lessons from the pandemic