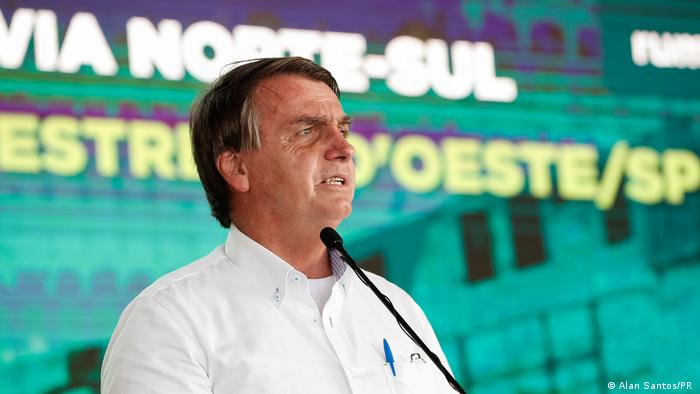 Brazil's President Jair Bolsonaro said on Thursday that people needed to "stop whining" about COVID-19 in his latest outburst against the protective measures to contain the crisis.

The far-right leader's comments come as Brazil goes through its deadliest week of the coronavirus pandemic, with more than 1,300 deaths per day.

"Stop whining. How long are you going to keep crying about it?" Bolsonaro said as he called for easing restrictions. "We regret the deaths ... But where's Brazil going to end up if we just close everything?"

The South American country of 212 million people has had an outbreak of cases, partly due to a variant of the virus detected in the Amazon rainforest.

Bolsonaro previously compared COVID-19 to a "little flu" and promoted hydroxychloroquine as medication, despite studies showing its inefficiency against the virus.

Elsewhere in the Americas

Honduras said it is set to receive 4.2 million doses of the Russian Sputnik V vaccine as pressure piles on the government to vaccinate with delays from the expected COVAX shots, Reuters reported.

The government had also struck a deal with AstraZeneca for 1.4 million doses of its coronavirus vaccine.

In California, the San Diego Zoo vaccinated nine great apes against COVID-19 after gorillas in its Safari Park contracted the virus from their keeper, officials said.

Four orangutans and five bonobos received their two-shot jabs in January and February, making history as the first non-human primates recorded to receive a coronavirus vaccine.

Germany’s top health authority reported on Friday that the coronavirus variant first detected in Britain, now made up at least 40% of cases, compared to 6% four weeks ago.

"It is foreseeable that B117 will soon be the predominant variant in Germany and then it will be even more difficult to keep the virus in check because B117 is more contagious and even more dangerous in all age groups," said Lothar Wieler, head of the Robert Koch Institute.

A rise in coronavirus cases would threaten Germany's plan to ease lockdown restrictions. Chancellor Angela Merkel announced on Wednesday a five-step plan to relax the measures in place that was highly conditional to the rate of weekly cases.

A study carried out by Oxford University in the UK has shown that the vaccine that it cooperated on with AstraZeneca is effective at protecting people against the COVID-19 variant discovered in Brazil, according to preliminary data seen by Reuters on Friday.

South Africa had already paused deployment of the AstraZeneca vaccine after early results showed the jab to be less effective against the strain which was discovered there.

Switzerland is to offer free COVID tests to the public,and commuters from across the borders, as of mid-March, the government has announced.

Each person will be given five self-testing kits per month. The distribution program is expected to cost CHF 1 billion ($1 billion).

The Czech Republic has reluctantly called for help from nearby nations as its hospitals struggle to cope with the burden of coronavirus patients.

Germany, Poland and Switzerland have been asked to take on and treat at least a dozen patients, the Health Ministry in Prague said.

"We are in a situation we never wanted to be in," Health Minister Jan Blatny said.

Paris has massively extended its ban on alcohol in public places.

Alcohol consumption is now prohibited on the banks of the Seine, the Saint Martin Canal, Place du Tertre and in many other public places across the French capital, the police prefecture has announced. In addition, shops larger than 10,000 square meters, that do not sell food, will have to close.

Italy is postponing a round of local elections until after the summer due to the spread of coronavirus.

Major cities, including Rome, Milan, Naples, Turin and Bologna, were set to elect new mayors in June, but the pandemic has challenged their campaigns.

People will instead vote on a date between September 15 and October 15, Prime Minister Mario Draghi's office said after a cabinet meeting.

Health officials have been "made aware of four preliminary reports of stillbirths potentially associated with a condition called COVID Placentitis," Ronan Glynn said.

"I can't give too much detail because there's not too much more details to give at this point," Glynn added, according to AFP.

Recent reports have shown that women in Africa were less likely to die due to a coronavirus infection than men, the United Nations said.

However, women were more likely to experience maternal complications as access to reproductive service declined since the pandemic hit the continent.

"There was a rise in maternal deaths in 10 countries," the World Health Organization (WHO) regional director for Africa, Matshidiso Moeti, told an online news conference.

Australia's Prime Minister Scott Morrison said on Friday that he "understands" Italy's decision to block the export of AstraZeneca vaccines, given how much worse the situation is in Europe compared to Australia. Nevertheless, his government in Canberra did ask the EU to review the decision.

Last Saturday, Adern imposed a week-long lockdown on the city of 2 million after six months without one as the virus variant, first detected in Britain, caused 15 community cases in February.

Auckland is moving to Alert Level 2, which includes restrictions on crowd sizes but allows people to continue most aspects of life as normal.

Alert Level 1 would only require people to wear masks on public transport.

Meanwhile, Japan is extending the state of emergency in Tokyo by two weeks, Economy Minister Yasutoshi Nishimura said on Friday.

The current state of emergency includes closing restaurants and by 8 p.m. The government also asked people to stay at home from 8 p.m. unless it is essential for them to go out.

Is it game over for Japan’s video arcades?

Also in Japan, supercomputer simulations found that wearing two masks was 89% effective in blocking particles, compared to 85% when properly wearing one mask, Reuters reported. This conclusion partially contradicts advice from the US Centers of Disease Control and Prevention (CDC) that two masks were better than one, suggesting instead that any benefit appears to be minimal.