Brazil reported 1,910 fatalities, with many hospitals at capacity. Meanwhile, US President Joe Biden slammed what he called 'Neanderthal' decisions to drop mask requirements in two states. Follow DW for the latest. 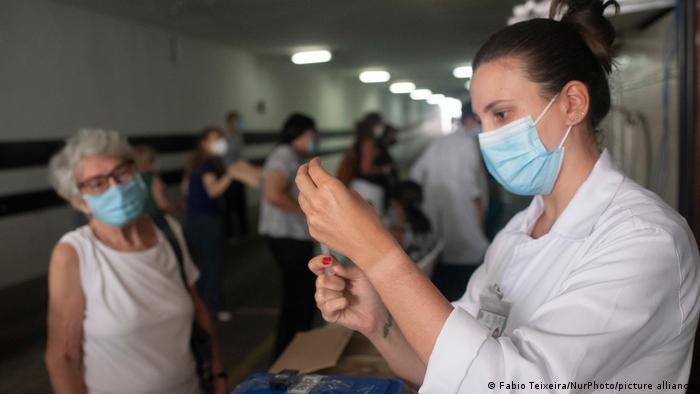 A healthcare worker administers a vaccine in Rio de Janeiro, Brazil, in February

Brazil registered a record number of deaths for the second consecutive day on Wednesday, with 1,910 fatalities. With a surge in cases pushing health systems to the brink in many areas, Brazil has recorded a total of 259,271 deaths, marking the second-highest death toll in the world, after the United States.

"For the first time since the pandemic began, we are seeing a deterioration across the entire country," public health institute Fiocruz said before the latest figures were published. "The situation is alarming."

The prevalence of infections in England has dropped since January, but the rate of decline has slowed and cases might be on the rise in some areas, researchers at Imperial College London said.

They said the national prevalence was 0.49%, down two-thirds from the 1.57% recorded in January, but added that compared to interim findings for February, estimated prevalence had risen in London and the Southeast, as well as the East and West Midlands.

More than 165,400 volunteers were tested in England between February 4-23 to measure infection prevalence in the general population for the study.

The number of confirmed cases in Germany increased by 11,912 to 2,471,942, with the number of fatalities rising by 359 to 71,240, according to data from the Robert Koch Institute (RKI) for infectious diseases.  The new figures come as Germany announced plans to gradually ease coronavirus curbs and relax restrictions, despite concern over the spread of more aggressive virus variants.

German airline Lufthansa  posted record 2020 losses of €6.7 billion (roughly $8 billion) on Thursday after spending much of the year grounded because of the coronavirus pandemic.

The group, which includes Austrian Airlines, Swiss and Eurowings brands, said it expected to operate at 40-50% of pre-crisis capacity this year, down from an earlier 40-60% forecast.

The airline, which has outlined plans to cut its overall fleet to 650 planes in 2023, gave no further details of possible aircraft retirements or their potential replacement with newer, more fuel-efficient jets.

US President Joe Biden slammed what he called "Neanderthal" decisions to defy federal guidelines and drop mask-wearing mandates in Texas and Mississippi. The decisions were a "big mistake," he told White House reporters.

"The last thing we need is Neanderthal thinking that in the meantime, everything's fine — take off your mask, forget it. It still matters."

Rochelle Walensky, the director of the Centers for Disease Control and Prevention (CDC), echoed the warning, saying, "Now is not the time to release all restrictions."

"The next month or two is really pivotal in terms of how this pandemic goes," Walensky added. The US has recorded over 28.8 million cases and 518,000 deaths.

Vaccines are helping to reduce the number of infections in North America, but in Latin America, vaccinations have hardly started, fueling the risk of new variants emerging and further raising the rate of infection, the Pan American Health Organization (PAHO) said on Wednesday.

"As long as COVID-19 endures in one part of the world, the rest of the world can never be safe," PAHO director Carissa Etienne said in a briefing on the pandemic in the Americas.

Colombia was the first country to receive Pfizer vaccines this week, while Peru is expected to receive COVAX-funded inoculations next week, followed by El Salvador and Bolivia. Infections continue to drop in most of South America, but the northern Amazon basin region is facing a surge in COVID-19 that demands a swift response, the WHO's regional branch said.

Paraguay's health system is close to collapse a year into the pandemic, according to media reports. In the country's public hospitals, all beds in intensive care units are being used by virus patients.

"The hospitals are collapsing, the emergency rooms are collapsing, the supply of medicines is collapsing. Everything is collapsing," said Gloria Meza, chairwoman of Paraguay's medical association. She called for a tough two-week lockdown to get the situation back under control. So far, the country of more than 7 million people has reported over 160,000 infections and 3,200 deaths since the start of the pandemic.

Cambodian Prime Minister Hun Sen was vaccinated on Thursday with a shot supplied by the World Health Organization's COVAX initiative. Hun Sen received a jab manufactured in India, one of 324,000 doses of the Oxford-AstraZeneca vaccine that arrived on Tuesday.

His vaccination comes as Cambodia battles a new surge in infections that has mostly affected those living in Sihanoukville, a city that is home to the country's main port and huge Chinese investments and construction projects. Cambodia reported 31 new virus cases on Thursday, for a total of 909 since the pandemic began.

South Korea's central bank says the country's economy shrank for the first time in 22 years in 2020. Preliminary data showed the country's gross domestic product last year contracted 1% from 2019. It was the first annual contraction since 1998. However, that figure still made South Korea one of the top-performing richer economies on the planet last year. The Bank of Korea expects the economy to manage a modest recovery this year, driven by exports.