While announcing the plan to roll back the lockdown within England, UK Prime Minister Boris Johnson said he hoped the country was on a "one-way road to freedom." 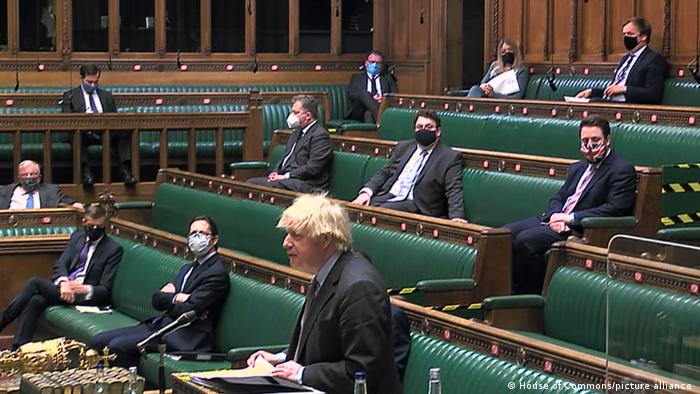 England will be moving to end all lockdown restrictions by the end of June, but this road would be "gradual and cautious," British Prime Minister Boris Johnson said on Monday.

Britain is one of the countries hardest hit globally by the coronavirus pandemic, with more than 120,000 deaths. But it was also the first nation to begin a mass vaccination campaign.

Johnson said there would be four phases to ending the restrictions in England. The measures in Northern Ireland, Wales and Scotland are decided by each nation's devolved administrations.

But Johnson warned that all of these dates were subject to change based on scientific data.

No way to end COVID-19 completely

The prime minister said there was "no credible route" to completely eliminating COVID-19 from the country and the world.

At the same time, he said it was necessary  to  ease the lockdown across England.

"We cannot persist indefinitely with restrictions that debilitate our economy, our physical and mental well-being, and the life chances of our children." he told UK lawmakers.

"That is why it is so crucial that this road map is cautious but also irreversible," Johnson said. "We’re setting out on, what I hope and believe, is a one-way road to freedom."

Single vaccine dose keeps most patients out of hospitals

To stem the spread of infections, Britain has rolled out COVID-19 vaccinations at high speed.

More than 17 million people have received a first dose of the jab so far.

A new study by Scottish scientists published on Monday found that people who received the first vaccine dose were less likely to be admitted to hospital with the disease.

The researchers from the University of Edinburgh, the University of Strathclyde and Public Health Scotland found that people who received the BioNTech/Pfizer jab were 85% less likely to be hospitalized four weeks after the first dose.

They also said that people who had a AstraZeneca/Oxford jab were 94% less likely to be hospitalized.