Known for their anti-Israel lyrics, Palestinian rappers Shadi Al-Bourini and Shadi Al-Najjar were due to headline a so-called "solidarity rally" held by Palestinian groups that the Israeli ambassador to Germany opposed. 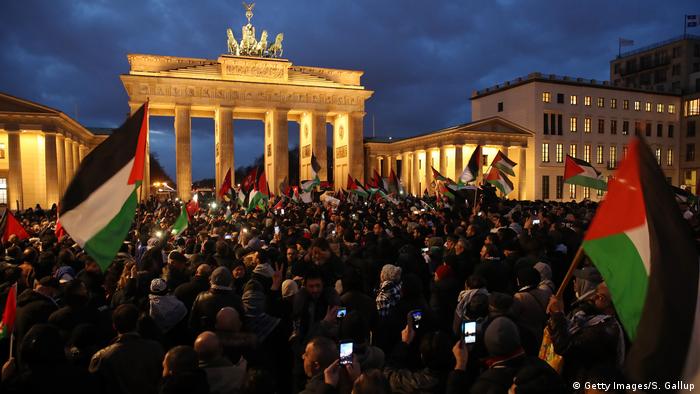 A Palestinian rally set to take place Wednesday in front of Berlin's Brandenburg Gate has caused a diplomatic storm as both the Israeli and US ambassadors to Germany called for a performance by Palestinian rappers Shadi Al-Bourini and Shadi Al-Najjar to be banned.

Their pressure succeeded at the last hour with the Jüdische Allgemeine newspaper reporting, just 30 minuted before the rally was due to start, that the Berlin Senate Department for Home Affairs and Sport said it was banning the two rappers from appearing.

The spokesperson for the Home Affairs and Sport Ministry, Martin Pallgen, said it would probably not be possible to ban the assembly itself. A police spokesperson also said that officers would be in attendance to ensure compliance with the ban.

The Palestinian rappers have ignited a storm due to their anti-Israel lyrics. Berlin daily newspaper Tagespiegel reported that the duo released the song "Strike a Blow at Tel Aviv" in 2014 during the Israel-Gaza conflict in which "they fantasize about bombing the Israeli city of Tel Aviv, razing it to the ground and 'crushing' Jews."

The rappers have also attracted attention for their use of anti-Semitic symbolism.

Former Green party lawmaker Volker Beck sharply criticized the planned performance, saying that "terrorism should not be glorified in front of the Brandenburg Gate."

He also questioned how "hate preachers" could even get a visa to Germany. The director of the American Jewish Committee, Remko Leemhuis, added: "We are horrified that artists who glorify terror against the citizens of Israel ... will have a stage in the heart of Berlin."

The police have stated at the request of the Tagesspiegel that an application for a rally whose motto was the "Palestine question" was approved, and that around 400 participants would take part at the Brandenburg Gate location. The venue has caused further controversy due to its close proximity to Berlin's Holocaust Memorial. 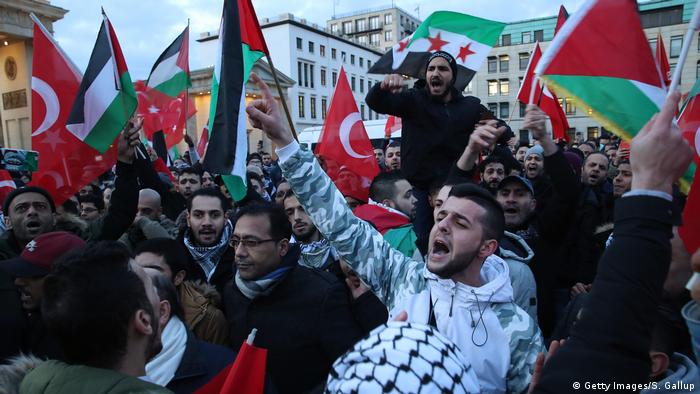 Palestinian rallies are not new to Berlin's Brandenburg Gate, this one from 2017 protesting against US President Donald Trump's announcement to recognize Jerusalem as the capital of Israel

As reported in the Jerusalem Post, Israel's ambassador to Germany, Jeremy Issacharoff, along with US ambassador in Berlin, Richard Grenell, demanded that the Wednesday performance be canceled.

"I appeal to the Berlin authorities to prevent this disturbing event at the Brandenburg Gate featuring antisemitic rhetoric," Issacharoff wrote. "Berlin should unite, not divide!"

Grenell agreed with Issacharoff's appeal, writing that the "rappers sing about the annihilation of Jews."

The Jerusalem Post also claimed that Berlin Mayor Michael Müller — who the paper pointed out had hosted an "anti-Semitic Iranian mayor" from Tehran a few weeks ago in Berlin — "is facing another crisis moment." It went on to allege that "Müller has been accused over the years of being soft toward rising Jew-hatred in Germany's capital."

The American rapper had claimed the street brawl was an act of self-defense. The case gained widespread attention when US President Donald Trump asked the Swedish government to violate the independence of its courts. (14.08.2019)

#Susamam has had more than 20 million clicks on YouTube. The musicians' message to their fellow citizens: "Don't remain silent!" The ruling AKP party in Turkey feels provoked; the Turkish press has also admonished DW. (12.09.2019)