Controversial map displaying refugee homes causes a stir in Germany | Germany| News and in-depth reporting from Berlin and beyond | DW | 16.07.2015

Activists fear an online map apparently created by a neo-Nazi group and which shows the locations of refugee homes and planned shelters across Germany could lead to more attacks against asylum seekers. 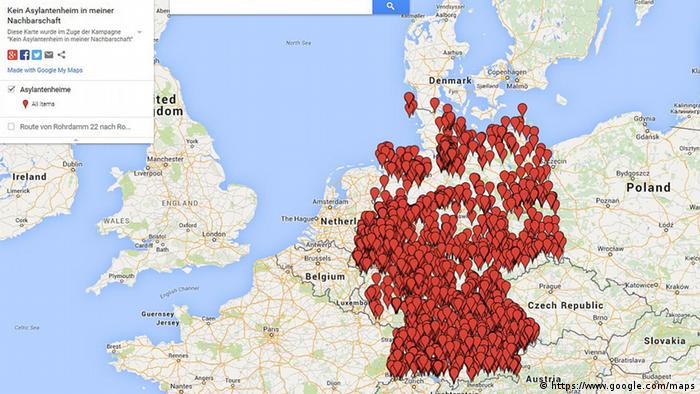 Every red dot on the map represents a shelter for asylum seekers - and there are red dots all over Germany.

A quick look at the online map, whose title translates roughly to "No refugee center in my backyard", suggests there is little space left in Germany that isn't already home to an asylum center or refugee shelter. Dots on the map are of equal size regardless of whether an address houses a single refugee or over a hundred.

A click on a dot offers more information - often, it's a full address with a street name and number. Sometimes the extra information spells out how many refugees currently live at a shelter or details how many people will reside at a center currently under construction. The former British military base in Niederkrüchten, for example, is expected to house "up to 1,000 asylum seekers," the map said.

In other instances, it's pointed out how refugees are "taking over" - a former medical clinic will be turned into a home for asylum seekers, just like a former school gym or a parish hall. 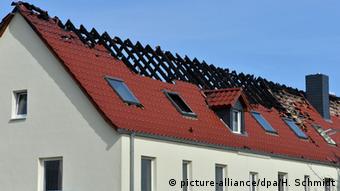 The creators of the map, which uses the Google Map service, have requested help filling in details about the refugee homes' locations and sizes from people willing to send addresses to an email address that appears to be affiliated with German neo-Nazi group "The Third Way." The group has published guidelines with the same title as the map and gives detailed information on how to prevent shelters for asylum seekers.

The group also provides a guide on how to organize anti-asylum demonstrations, mobilize people against the construction of refugee accommodation and put pressure on local politicians so that the shelters are not built to avoid what the group calls the "flood of asylum seekers."

Activists have called on Google to delete the map, arguing that it stirs up hate and promotes violence against asylum seekers.

Google is currently investigating the matter, Google Germany spokesperson Lena Heuermann told DW: "MyMaps is a neutral platform that [people] can use to publish geographical information. We will of course remove every map that violates our guidelines and we are currently reviewing if that is the case."

Google was unable to comment on how many users had sent in requests to take down the map or when the map was first created. 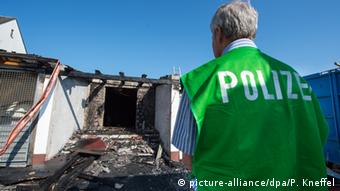 The map does not explicitly call on people to attack refugee homes. Instead it says it wants to prevent abuse of German asylum laws by people who do not require legal protection. Text accompanying the map says that just 2 percent of asylum requests are approved by German authorities.

Statistics from the German Interior Ministry for 2014, however, show that while 1.8 percent of applicants received asylum status, another 24 percent of people applying for shelter in Germany were recognized as refugees deserving protection.

There, is, however little that can be done in terms of legal prosecution when it comes to the map, said Robert Lüdecke of the Amadeu Antonio Foundation, which works to eliminate neo-Nazism and right-wing extremism. The foundation is one of the groups that have urged Google to take down the map.

"We realize, of course, that [deleting the map] is not the solution that will solve all problems, but it's important to send a message to operators such as Google to say that we don't tolerate such a thing," Lüdecke told DW.

Revealing the addresses posed a threat to asylum seekers, he added. That's also the case with shelters that have yet to be built or converted to housing.

"As soon as I say this is going to be housing for asylum seekers, there is the fear and risk as we've seen in the past months and years that right-wing extremists mobilize early on to prevent such housing projects," he added. "This, unfortunately, seems to be a tactic that's working." 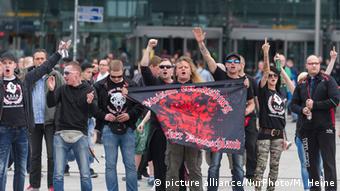 Figures from Germany's Interior Ministry published last month show that 990 right-wing attacks took place in 2014, an increase of 24 percent compared to 2013. Of last year's violent incidents, 512 of the cases were xenophobic attacks.

In the early hours of Thursday, a building in the southern German state of Bavaria that was slated to house refugees was set ablaze. Last weekend, a shelter in Saxony in Germany's east was shot at two nights in a row, bursting windows and scaring residents.

"They don't just want to document addresses, they also want to visualize this 'wave' of asylum seekers they always talk about," Lüdecke said. "They don't just want to reach the potential violent criminals and racists, but also those who might voice their displeasure with refugees and tell them: 'Look, in every German state there are refugees now and it's time to act.'

"I really fear that this map could provide a travel route for right-wing extremists," Lüdecke said.

German Justice Minister Heiko Maas has sharply criticized the latest anti-refugee protests in the eastern town of Freital. He said refugees were welcome and that xenophobia had no place in Germany. (25.06.2015)