Right-wing extremist attacks in Germany on the rise, says new report | Germany | News and in-depth reporting from Berlin and beyond | DW | 01.07.2015

The number of attacks motivated by right-wing extremism in Germany has gone up, according to the country's 2014 Constitutional Protection Report. Refugee shelters were a frequent target. 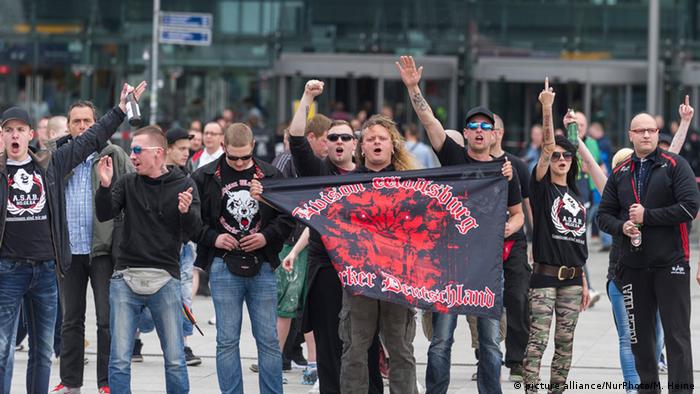 New figures in Germany have shown a 24 percent rise in the number of violent incidents motivated by extremism last year. According to the most recent Constitutional Protection Report, known as the Verfassungsschutzbericht, 990 acts of violence were attributed to right-wing extremists in 2014. Within this set of crimes, the number of xenophobic attacks, which the report tallied at 512, reached its highest number ever.

German Interior Minister Thomas de Maizière (CDU) said that the 170 criminal acts directed at refugee shelters in 2014 - three times as many as in the previous year - were "beyond shocking."

"A climate of fear"

Such attacks, says de Maizière, create "a climate of fear and intimidation" within targeted communities. It is simply unacceptable that mayors and volunteers who help refugees are threatened, he said, adding there can be no silent acceptance of violence against asylum seekers or refugees. "We have to take a clear stance," said de Maizière.

Hans-Georg Maassen, President of the Federal Office for the Protection of the Constitution, described the strategy of right-wing extremists as follows: They are increasingly attempting to pick up on themes that worry people, and to infiltrate and co-opt movements such as "Pegida."

An eye on right-wing terrorism

Both de Maizière and Maassen considered the early detection of the "Old School Society" this spring a success. The group, which was supposedly planning attacks on asylum shelters and mosques, is currently being investigated by the attorney general under the suspicion of intent to form a terrorist organization. Security agents discovered it while monitoring the chat program "WhatsApp."

"Cooperation between federal and state agencies was exemplary in the case," as de Maizière emphasized. Security agencies appear to have learned from the many mistakes that were made in dealing with the "National Socialist Underground" (NSU). Thanks to grave investigative errors, and communication lapses between state and federal authorities, that particular right-wing terrorist cell was able to operate undetected for years. 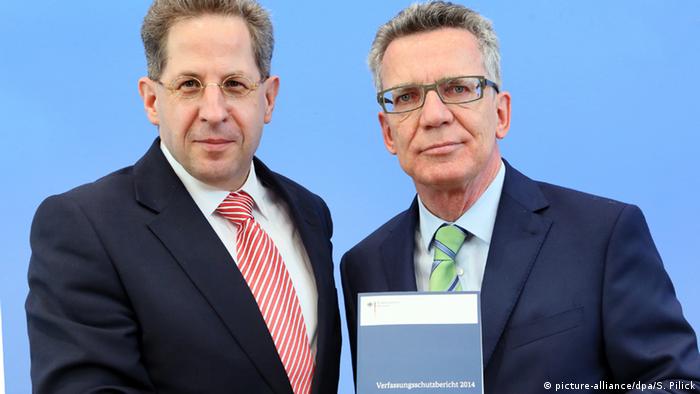 Constitutional authorities also recorded an increase in left-wing violence. As an example, de Maizière cited the violent protests that accompanied the opening of the new European Central Bank headquarters in Frankfurt am Main. Left-wing extremists operated with a "destructive frenzy and an appetite for violence" during the protests. "I was deeply troubled by the level of barbarism that we experienced there," said the interior minister.

As of late, Leipzig has become a new center for violent left-wing activity. The most recent display was in early June, when groups of masked youths rioted, erected blockades and threw rocks. The new police station that opened in Leipzig's Connewitz neighborhood in February 2014 has already been attacked 16 times by left-wing rioters, according to de Maizière. Police officers as well as rescue workers have increasingly become the target of attacks.

Danger of an attack in Germany

Beyond that, militant fighters returning to Germany from Syria and Iraq pose a considerable threat to domestic security, authorities say. According to security agency findings, their number has risen to around 700. Another 7,500 Salafists can be added to that number as well - in 2011 there were just 3,800. "We have the impression that society doesn't yet have a handle on radicalization prevention," says Maassen. Despite heightened awareness by security officials, they fear there could still be attacks in Germany.

Even less controllable - as evidenced by the cyber-attack on the Bundestag - seems to be the protection of the internet. Maassen says thousands of attacks on the government's IT infrastructure are foiled daily. Two to five of those attacks come from other countries' security services. The main culprits are Russia, China and Iran. German authorities have learned from these attacks, as well as from the so-called NSA affair, and say they have developed a "360 degree view" in which they oversee all the activities of foreign security agencies operating in Germany - friend and foe alike. Further, the "electronic attacks" workgroup in the Agency for Constitutional Protection has been strengthened.

In spite of all that, possible spying on German citizens by the US National Security Agency (NSA) doesn't concern Maassen: "We don't have any evidence of that."

Why does a highly regimented world attract young people? Aladin El-Mafaalani investigates Salafism as a youth culture. In an interview he explains why young people join the scene and why it is difficult to counteract. (16.06.2015)