The NGO in Essen has begun handing out membership cards to non-Germans for the first time since December. The food bank's manager expressed relief at hopefully staying out of the national spotlight in the future. 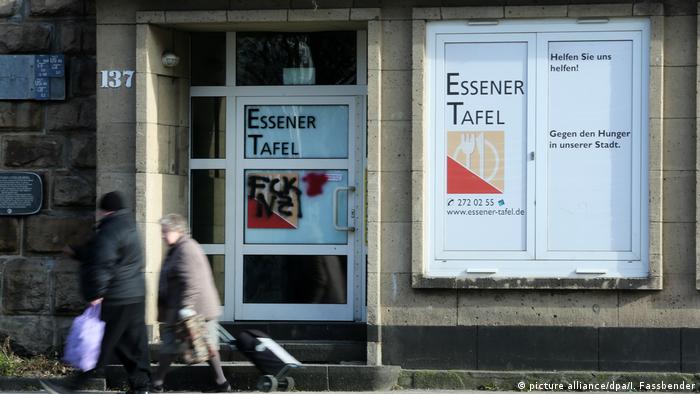 A food bank in the German city of Essen began handing out membership cards to foreigners again on Wednesday, months after it found itself at the center of a national debate on migration and xenophobia.

The 61-year-old manager Jörg Sartor said he was relieved the furor was "finally at an end."

In December, the management board decided on a temporary basis to suspend new memberships for the food center, or Tafel, to non-Germans. The reasoning they gave for this was twofold: About 70 percent of those receiving food aid were foreigners, and were stretching the NGO's resources, and secondly, several older patrons had complained of "pushing and shoving" in line for food.

The decision went into effect in January, and when the media caught wind of the development the next month, Sartor was flabbergasted to be thrust into the center of Germany's internal struggle with how Chancellor Angela Merkel handled the 2015 refugee crisis.

Sartor pushed back against criticism that his organization was xenophobic, as many people asked why he was basing the cuts on nationality rather than on need.

A few days later, the food bank's doors and delivery vans were spray-painted with graffiti that read "F*** Nazis," and politicians of every ilk were weighing in on the situation.

Chancellor Angela Merkel said that while she understood that the Tafel had to deal with its lack of resources, she thought they had gone about cost-cutting the wrong way.

Left party leader Sahra Wagenknecht chastised Merkel's government for refusing to answer the question: "Why in a country as rich as Germany are we arguing about who gets leftover groceries?"

In March, however, the organization moved to reverse its decision, stressing that the measure had always been temporary.

But all seemed forgiven and forgotten on Wednesday, as dozens of native Germans and foreigners alike lined up for their donated food.

A food bank that provides groceries to about 6,000 people decided to stop issuing membership cards to foreigners. Now it's at the center of a heated national debate, and even Chancellor Merkel has an opinion. (27.02.2018)

Irmgard Schadach manages one of the Berlin Tafel food bank's pantries for impoverished people, who receive groceries in exchange for a token sum. Schadach says more and more people are coming, while less and less food is being donated.

Germany: Soaring inflation will hit the most vulnerable 19.01.2022

Germans have good reason to worry about rising consumer prices. With inflation at a 30-year high, it's the country's neediest who will be hit the hardest.