An installation made of three disused buses had sparked a heated debate in Dresden last February: The unusual peace memorial by a Syrian-born artist will be set up in front of the Brandenburg Gate for two weeks. 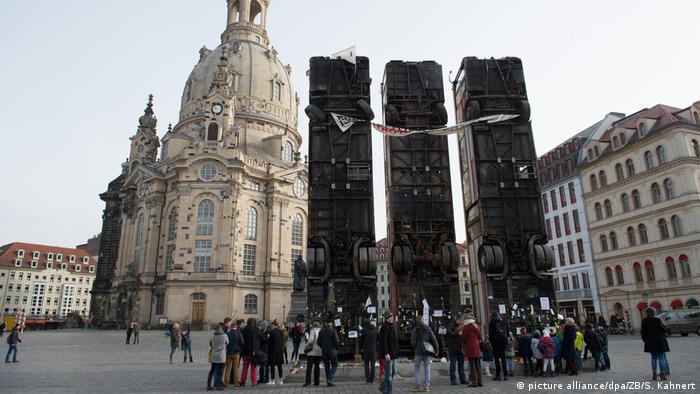 The artwork "Monument" in Dresden

The 12-meter-high (over 39-foot-high) artwork "Monument," by German-Syrian artist Manaf Halbouni will be standing right by the Brandenburg Gate as of Friday until November 26, said Wednesday initiators of the project, Berlin's Maxim Gorki Theater.

The installation, made up three buses propped up vertically, represents the buses used as barricades that civilians in Aleppo, Syria, had erected in 2015 during combat operations in the city to protect themselves from snipers.

The artist said he intentionally used buses that had not been wrecked as a symbol of the peace that is present in Germany – unlike in Syria.

From February to April this year, the sculpture stood in front of the Dresden Frauenkirche, the restored church that serves as a symbol of peace and forgiveness after WWII.

The artwork caused massive protests that were organized by supporters of the far-right party AfD and the xenophobic movement PEGIDA. Dresden's Mayor Dirk Hilbert even received death threats from the artwork's opponents.

Halbouni defended his artwork at the time, saying that he hoped Aleppo would be restored in the same manner Dresden had been after World War II.

The strong symbolism of Brandenburg Gate

In Berlin, the "Monument" will be presented as part of Maxim Gorki Theater's "3. Berliner Herbstsalon" (Third Berlin Autumn Salon), a public event that is described by organizers as a "rebellion against attributions, generalizations and simplifications."

Berlin's cultural senator Klaus Lederer welcomed the new location for Halbouni's installation right next to the Brandenburg Gate: The work will be on show in a location "which stands for freedom and democratic traditions that were fought for and peacefully obtained," he said.

He also emphasized that the sculpture should be the "starting point of discussions about how destruction, suffering and war can be overcome, and how reconciliation is possible."