Goethe-Institut director: 'We want Syrian artists to resume their role in society'

The Goethe-Institut had to close its Damascus office in 2012 - due to the ongoing civil war. Germany's cultural organization has now opened "Damascus in Exile" - a meeting place for Syrian artists in Berlin. 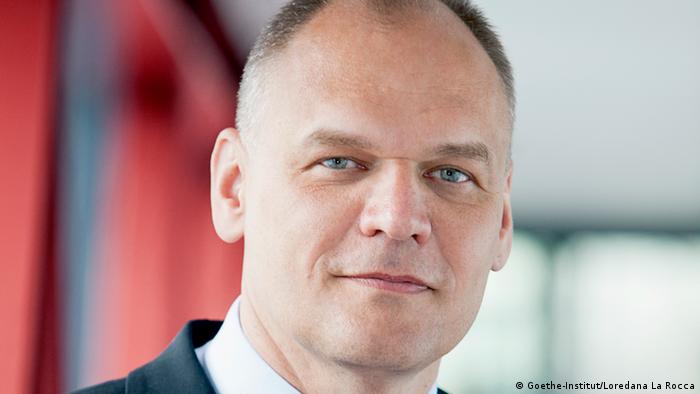 The director of the Goethe-Institut, Johannes Ebert, told DW's Stefan Dege what the "Damascus in Exile" project can do for Syrian artists - but also for German society.

DW: Mr. Ebert, the Goethe-Institut continued its work in Damascus until 2012. What was the cultural situation in the country?

Johannes Ebert: The culture scene in the Damascus was very active. There were artist in every field, a publishing house, universities for musical training, etc. But everything was controlled by the state.

Then you closed the Goethe-Institut office in Damascus. Why was that?

Due to security reasons. There was a concrete situation of threats against us Germans.

What remained of the culture scene?

Many of the artists fled, particularly those who were critical. We can see that in the program for "Damascus in Exile." Of the 90 participants, 45 are artists that fled and now live in Germany or Europe. My analysis is that there was a move to clear out the cultural scene in Syria.

We want the artists to be able to continue their work so that, when Syria is rebuilt, they can resume their roles in society. That is important.

A Goethe-Institut in exile in Berlin that gathers together Syrian artists - what can this achieve? 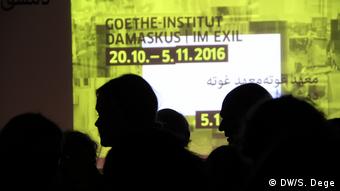 "Damascus in Exile" runs through November 5

Our main job is abroad. Here, we are showing what the Goethe-Institut does in crisis regions. Secondly, what role do refugee artists from Syria play here in Germany? That is also something this project is making clear.

Many artists are already living in exile. Are you now getting involved in domestic cultural policy?

With international cultural work, foreign and domestic matters are becoming increasingly difficult to separate. With its network of 159 institutions in 90 countries and countless partner organizations, the Goethe-Institut has a lot of knowledge and insights about foreign cultures. It can be very useful for a country like Germany, which is so international, when we bring our insights to the discourse and cultural scene.

How broad is the political and religious spectrum of Syrian artists that are participating in the project?

I have only spoken with a few of the artists. No one voluntarily leaves their country. For the artists that are here now, Germany is a safe place of refuge. They are trying to integrate into the local culture scene.

The world is becoming more and more complicated. Nationalism is rising up, wars are breaking out and dictators are gaining power. What does the Goethe-Institut have to say in response?

That's a pivotal question for us. In many countries, like Russia or in the Arab world, laws are being tightened that make life difficult for NGOs. At the same time, there are people active in the cultural scene, who are grappling with their societies.

We need places like the Goethe-Institut where people can meet and freely exchange thoughts, where experiments are possible, and where contemporary art and culture is fostered. And even when it looks from the outside like societies are experiencing setbacks, it's important for German organizations to continue their work.

Our strategy remains essentially unchanged. We provide a space for cultural exchange with Germany. But perhaps we need to be even more sensitive, more precise and more courageous.

Will the Goethe-Institut offices in Moscow, Tehran and Addis Ababa be the next ones to have to come to Berlin?

No. "Damascus in Exile" plays a special role for us. It's about the issue of flight. This has a very strong impact on our society. The largest group of refugees comes from Syria. And secondly, we used to have a Goethe-Institut in Damascus. Many of the partners we had in Damascus are now here. That's why we said we'll try "Damascus in Exile" and create this small platform.

Learning German is gaining popularity in the Balkan states

There is high demand for German courses in countries in the Western Balkans. The Goethe Institute is now even offering children's courses. (06.10.2016)

What's your favorite place in Germany?

A street corner in Berlin, a bakery in Gotha, a clock factory in the Black Forest - participants from 100 countries told the Goethe-Institut about their favorite places in Germany. One of them stood out. (05.07.2016)