A UN construction site in Bonn was converted to an archeological dig when a 2,000-year-old Roman village was discovered. Jugs, plates, remnants of a public bath and a paved street reveal a surprisingly modern people. 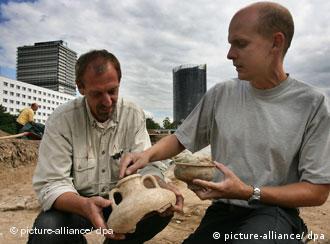 The mass of dirt directly across from the plenary hall in Bonn's former government quarter looks like the surface of the moon. Deep pockets have been dug out in several spots and three excavators are boring their way deeper into the ground.

Nora Andrikopoulou-Strack is standing on one of the other-worldly dirt mounds, with clay-smeared boots on her feet and a broad smile on her face. She is responsible for turning this construction site into an archeological dig.

"This dig site is, technically speaking, the greatest coherent window into the history of a Roman vicus that we've ever had in Germany," she said. 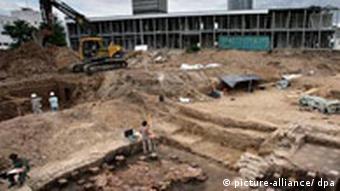 When it came to floor heating systems, the Romans were well ahead of their time

Construction workers were in the middle of building a new UN convention center when they quite literally ran into the vicus, that is, a Roman village. The building project has now been put on hold while archeologists uncover the plates, pots, bones and other historical treasures that lie three meters (10 feet) underground.

Excavators and shovels are used for the rough work before rakes are brought in for the parts of the process that require a finer, more detailed touch.

"Actually it's a garden tool," said an assistant in the dirt-coated overalls, referring to the rake. "We can use it to clean off parallel surfaces."

Everything that the 50-person team has uncovered in the past several weeks -- cups, jugs, pottery shards, hair pins and bones -- has been cleaned up, numbered and carefully stored. Some 300 boxes have already been filled with artifacts discovered in the ancient apartments, hidden for so many years underground. 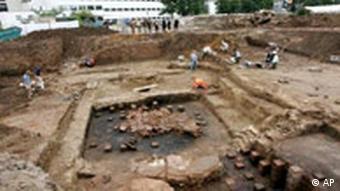 Some 2,000 people probably lived in the Roman village

"This plate is a particular highlight. It really looks as if it just came from the potter's workshop. After more than 2,000 years the quality is still excellent," said head archeologist Peter Hendrick, holding up a piece of porcelain.

In addition to Claudius Secundus, whose name is on one of the plates, around 2,000 people must have lived in the village. They made their homes in stable houses with shops at the front and gardens out back.

The village boasted a paved street, a temple and a brick oven, and apparently also had a public bath with floor heating.

The artifacts Hendrick and his team have found are not limited to Roman times, however. More recent items, from the 19th and 20th centuries, have also been discovered.

The numerous bottles and caps that have surfaced offer insight into the history of Bonn's breweries, for example. A rusted American helmet from World War II -- with a bullet hole -- was also among the finds.

A group of German scientists has deciphered the meaning of one of the most spectacular archeological discoveries in recent years: The mystery-shrouded sky disc of Nebra was used as an advanced astronomical clock. (March 10, 2006)

While many students consider Latin a grammatical nightmare of declensions, cases and genders which must be painfully memorized, the tongue of Julius Caesar, Cicero et al. is a popular subject in German schools. (April 12, 2006)

Traveling Into the Past at Germany's Open-Air Museums

People curious about life in earlier times in Germany can visit the numerous outdoor museums the country has to offer. They'll find everything from Roman history to the Middle Ages to farming in the 19th century. (Aug. 2, 2006)