Compact with Africa: Enthusiasm wanes for the 'Merkel Plan' 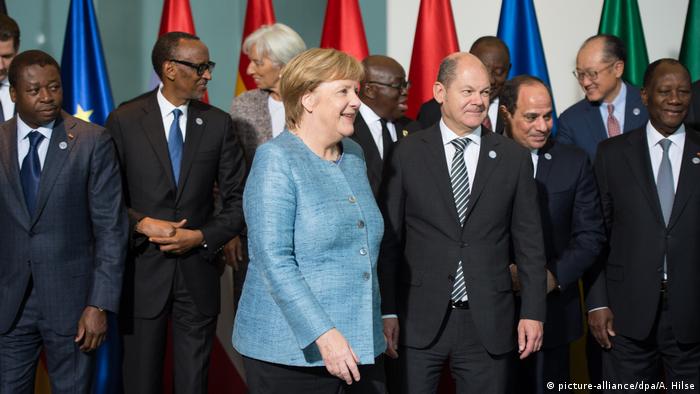 It looks set to be another big day for Chancellor Angela Merkel: The heads of state of the G20 Compact with Africa (CwA) countries are meeting for the third time in Berlin on Tuesday, November 19. And the German government has ensured the bar is high. Merkel launched the Compact back in 2017 during Germany's G20 presidency with a promise to generate additional private investment in African states. In turn, participating African states would commit themselves to implementing economic reforms. A "Merkel Plan," joked Ivory Coast president, Alassane Ouattara.

But much of the initial excitement has since waned. "At the time, there were unrealistic expectations that a few measures could boost investment," Robert Kappel, a German economist from the Institute of African Studies in Leipzig, told DW.

Nevertheless, the meeting is expected to produce some positive news, including, among other things, the presentation of the so-called "flagship projects" of German companies in Africa. Overall, however, foreign investment in the 12 African countries which are part of the initiative has barely risen. From 2017 to 2018, foreign investment rose slightly to $21 million (€19 million) – still below the level of 2016. 80% of this money went to just four countries: Egypt, Morocco, Ethiopia and Ghana.

"The African countries have fulfilled their mission of creating an appropriate environment for investment," says Kappel, who authored a critical study of the Compact with Africa commissioned by the Friedrich Ebert Foundation, an organization affiliated to Merkel's coalition partner, the German social democrat party (SPD). "Now they are disappointed that direct investment isn't flowing."

It's not just the urgently-needed investments that have failed. The jobs that governments across Africa have been desperately waiting for also haven't materialized. It's estimated that about 440 million people will enter Africa's labor market 2030 – but no one knows how they will actually make a living.

"There has been good progress, but the investments over the past two years have not been enough," Ethiopia's ambassador to Germany, Mulu Solomon Bezuneh, told DW. "The program seems reasonable, but compared to our expectations and our efforts, the response has been too low."

However, supporters of the Compact with Africa warn against writing off the program already. "Many investment projects span 10 years or more," Rob Floyd from the African Center for Economic Transformation (AECT) told DW. The think tank, which is based in Ghana's capital Accra, regularly evaluates the progress of the initiative on behalf of all member countries. Overall, the Compact is making good progress, explains Floyd. But there's still more work to do: "All countries could do more – the Compact countries should present their projects to investors more effectively. The G20 countries are actively promoting their commitment to Africa through their companies."

Markets are too small

However, Germany is doing a lot more to entice companies to Africa. At last year's Compact Conference, Merkel announced a fund of up to €1 billion which would be used to support both German and African companies. The economic and development ministries have also launched their own Africa initiatives. Nevertheless, most German companies are still looking elsewhere. Only around 800 companies with German capital are currently active in Africa. According to a study by the Allensbach Institute, just 5% of all remaining German companies plan to do business on the continent in the future.

And companies don't have to invest in the participating Compact countries. Entrepreneur Karl-Heinz Knoop told DW his investment decisions have nothing to do with whether or not a country is a member of the Compact. "We are looking for markets where our products are really needed," he says. His mid-sized company Riela, a German-based agricultural equipment manufacturer, has maintained a presence in Africa for five years.

Some Compact countries, such as Guinea, Benin or Togo, are too small for foreign businesses. Meanwhile, economic heavyweights such as Nigeria or Kenya are not part of the Compact. Knoop says there are other factors that entrepreneurs such as himself need to consider before engaging in Africa: "Where are the raw materials? Where can I produce my machinery well and where can I find good employees?" In the future, he plans to manufacture his machines in South Africa – even though it isn't a Compact country.

An organizational snafu between two of Germany’s highest-profile politicians overshadowed new policy goals in Africa and fueled speculation of what is to come in a post-Merkel era. (08.10.2019)