When young Colombian activists won a historic lawsuit against their government, they thought the rainforest was saved. A year later, they're piling on the pressure to see their leaders act on the ruling. 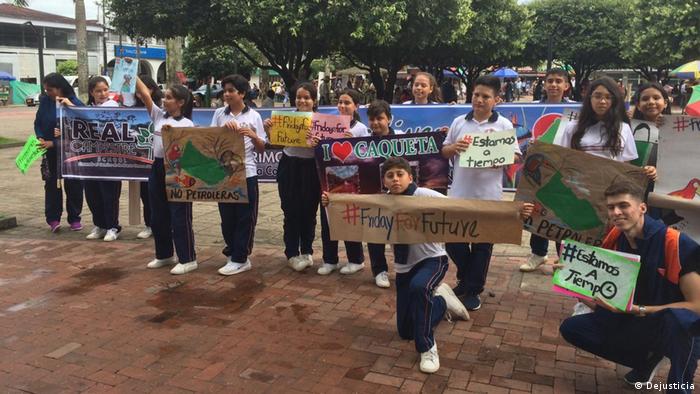 At just 9 years old, Aymara Cuevas is part of a group of children and young people in Colombia fighting to protect the Amazon rainforest. "I joined the action because the Amazon is a very beautiful place with water, species, animals, tribes, and if we cut [down] the trees we are leaving them without a home," she told DW.

She is one of 25 plaintiffs — 11 of whom are under the age of 18 — taking action in the country's courts. In April 2018, the group successfully sued the Colombian government for failing to protect the Amazon rainforest. But they've learned this victory was just the beginning: more than a year later, they're again holding the government accountable, this time for failing to act on the Supreme Court's decision.

In last year's historic lawsuit, Colombia's Supreme Court ruled the state had failed to protect citizens' rights to a healthy environment, and failed to meet its international agreements to reduce greenhouse gas emissions and deforestation, among them the 2015 Paris climate accord. Deforestation in the Amazon, an important carbon sink, is known to be the main source of greenhouse gas emissions in Colombia. Successfully stopping logging there is key to Colombia's climate protection efforts.

Michael Gerrard, director of the Sabin Center for Climate Change Law at Columbia University in New York, has commended the detailed orders the Supreme Court gave the government, calling the court's decision "one of the most solid environmental judgments that any court in the world has dictated." The court's orders included giving indigenous groups and the young plaintiffs a say in plans to reduce deforestation and the creation of an "intergenerational pact" to protect the Amazon.

Read more: In Colombia, locals fight to save a unique, disappearing habitat

A recent study from the London School of Economics found that climate change cases have been brought in at least 28 countries around the world. The Colombia case was the first of its kind in Latin America, and was welcomed as a major breakthrough.

Immediately after the Supreme Court ruling there were positive signs from the government. Meetings were held between ministries and stakeholders the court had ruled should be involved in plans to protect the forest. But in August 2018, Ivan Duque of the conservative Democratic Center Party took office as president, and the meetings suddenly ceased.

The young activists have criticised the lack of progress implementing the ruling as well as the deforestation targets of the government that they believe are not taking into account Colombia's commitment in international agreements of bringing down net deforestation to zero by 2020. 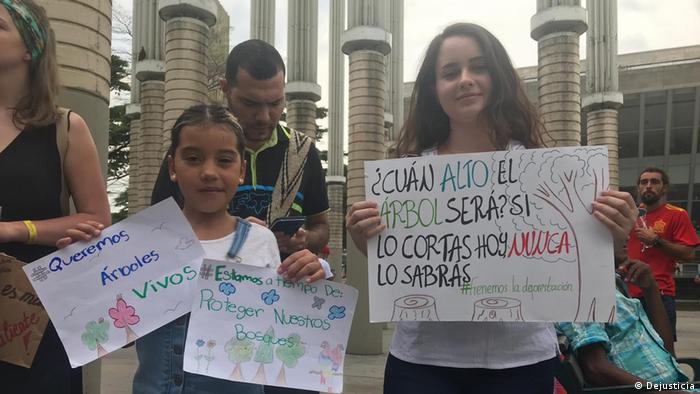 Although according to a recent government press statement deforestation decreased last year by 10% compared to 2017, the young activists still consider the 197,000 hectares felled in 2018 to be too high. Ideam, Colombia's Institute for Environmental Studies, had calculated that if the rates of recent years continued the country could be seeing up to 315,000 hectares being felled in 2020. The National Development Plan 2018 of the Duque administration stated aims to reduce this forecast by 30%, which the young plaintiffs believe to be incongruent with the court’s 2018 ruling. The Environment Ministry did not respond to our request for comment.

The activists are determined to hold their government accountable, and have filed a non-compliance report to the Tribunal of Bogota, where their lawsuit was originally presented.

Yurshell Rodriguez, a 23-year-old environmental engineer who is one of the plaintiffs, said the ruling must now progress from "the desk" — a commitment on paper — to real-world policy. "In Colombia we are good at the desk," she said. "We already have among the best environmental regulations in the world, so now we have to go out of the office and into the street."

Rodriguez was moved to join the legal action after seeing the effects of climate change firsthand on the island of Providencia, where she grew up. "Our grandparents are witnesses to how the beach has been moving and remember how there used to be houses where there is now sea," she told DW.

When Rodriguez was in her early teens in 2005, Providencia was hit by Hurricane Beta. "The hurricane took everything, ruined our homes and we had to go and live in a shelter," she said. Now she fears climate change could make such disasters a far more common occurrence.

Although many are disappointed by a lack of action following the historic legal case, experts say the ruling has had a positive impact on Colombia's public discourse around climate change and the Amazon.

"This legal action has opened a path for following up with the institutions involved, and has brought attention from the public and society like never before that won't be so easy to ignore," said Carolina Gil, program director at the Amazon Conservation Team Colombia, which partners with local communities to protect tropical forests.

Read more: Can we change the climate from the grassroots up?

The young activists say media attention has opened a space to communicate the importance of Colombia's rainforest, both for the planet and Colombians themselves.

"The Amazon is a very distant place in the imagination of Colombians because it's far from the cities and is populated mostly by indigenous people," said Gabriela Eslava, a lawyer from Bogota who, at 27, is one of the oldest of the plaintiffs. "This lawsuit has helped explain to the people of Bogota — in the Andes [mountain] region — that the access to water in the capital city is only possible thanks to the Amazon rainforest."

Climate change still isn't as popular a concern in Colombia as it has become in some parts of the world. The Fridays for Future movement that has had kids out protesting across the globe over the past year has attracted far smaller crowds in Colombia than across Europe and America. But the plaintiffs were among those who did join the strike. With the help of NGOs, they also used the occasion of the first global climate strike on March 15 to gather more than 90,000 signatures to protest the government's deforestation targets. 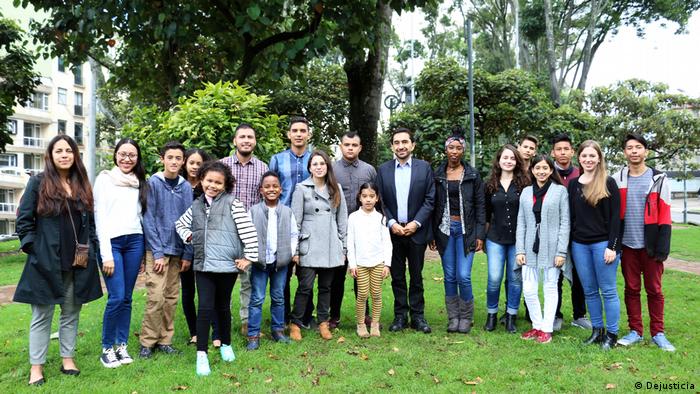 Eleven of the 25 plaintiffs are under the age of 18

The young activists are not only fighting for change in the courts, but also on the streets of their towns and cities. Cuevas has become a spokesperson for the school strikes in her home town of Medellin. "I like that we are telling adults not to damage our planet, because in the future it will be ours and no longer theirs," she told DW.

She and Acxan Duque, also just 9 years old, are raising awareness in other ways, too, like teaching their peers about environmental problems through workshops and community projects.

And while the young activists await a response from the Tribunal of Bogota, they're working on proposals for the intergenerational pact, including a mandatory chair on climate change in schools and an app showing Amazon deforestation in real time.

Eslava said the plaintiffs know they have a long fight ahead of them, but thinks they have a growing part of their country on their side. "I believe the ruling has sown a seed that will turn the fight against climate change into probably one of the most important social movements of our generation in Colombia," she said.

The Colombian teen fighting to protect her island's coral reefs

Activists and inhabitants have banded together to turn an illegal dump on the outskirts of the Colombian capital Bogotá into an eco haven. (26.07.2016)