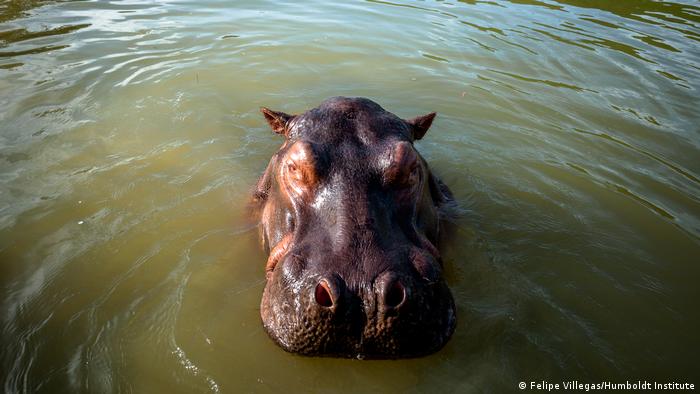 Carlos Valderrama is a vet with environmental NGO WebConserva. Not to be confused with his soccer-star namesake, he nonetheless holds a world record not even the 100-capped midfielder could compete with: Valderrama boasts of being the first person in the world to castrate a hippo in the wild.

The animal was so big, it had to be maneuvered with a crane and the procedure took 12 hours. What's even more remarkable is that it took place in Colombia — thousands of kilometers from the hippo's native lands in Africa.

From gray squirrels in northern Europe to feral cats in Australia, rats in New Zealand and rabbits in Australia, invasive species can throw whole ecosystems out of whack, consuming prey with no natural defenses against the invaders, or muscling out native competitors.

Most of these uncontrolled pests were introduced by humans, but Colombia's hippo invasion can be traced straight back to one particular human — none other than cocaine kingpin Pablo Escobar.

At the height of Escobar's criminal heyday in the 1980s and 1990s, the drug lord built a zoo on his vast Hacienda Napoles ranch between Medellin and Bogota. When he was finally killed by government forces in 1993, the ranch was left to ruin.

Other exotic species from the private menagerie, such as zebras, were moved to international and Colombian zoos, but zoos were unwilling or unable to give massive, aggressive hippos a home. 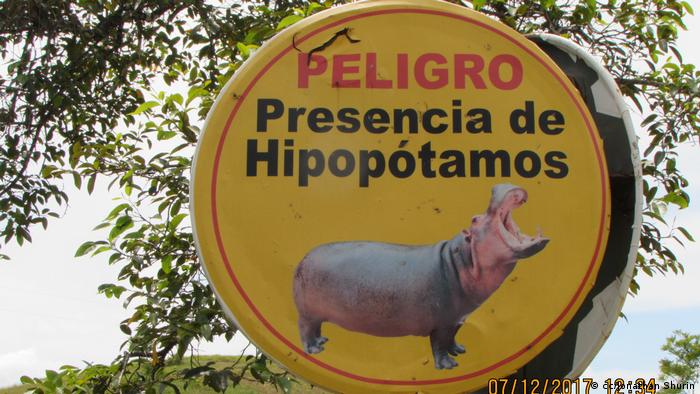 Colombia's hippo invasion can be traced back to Pablo Escobar

Too much to handle

Valderrama says an often recounted tale suggests one hippo was captured by the authorities only to escape from a vehicle mid-transit. It may be apocryphal, but the vet says it he wouldn't be altogether surprised to see one of these powerful creatures — which can weigh over three tons — making such a bid for freedom.

"I can believe it," he said. "When we transported the hippo we were castrating, it moved just a little while anaesthetized and the back wheels of the truck lifted up." 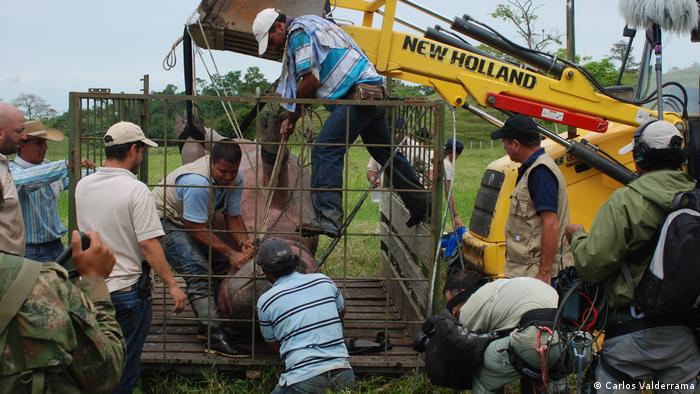 Sedated hippos are heavy and transporting them is fraught with risk

With no one knowing quite what to do with them, the semi-aquatic giants have flourished and multiplied and now number between 65 and 80, according the local environment agency. A recent study from the Humboldt Institute suggests there could be 150 Colombian hippos in the area a decade from now.

Most still dwell in the lake at Hacienda Napoles, making it an intriguing wildlife stop for backpackers and tourists. Others have made the nearby Rio Magdelena home. The large waterway is an ideal habitat, allowing them to wallow in the day and then come ashore at night.

Even in Africa hippos have no natural predators, the rare bold lion aside. There have been jaguar sightings near Hacienda Napoles, but South America's apex predator wouldn't stand a chance taking on the Escobar escapees.

"A jaguar is our biggest predator. It's huge, it's beautiful," Valderrama said. "But it's 100 kilos. It is not going to be able to do anything against a grown hippo."

In their natural habitat, hippo numbers are kept in check by seasonal droughts, which put pressure on their territory and food sources. But in lush tropical Colombia, there seems little to disturb the renegade beasts' peace.

In fact, they are so comfortable they even appear to be reaching sexual maturity earlier, breeding earlier, and producing more offspring, according to CORNARE, the local government agency for environmental management. 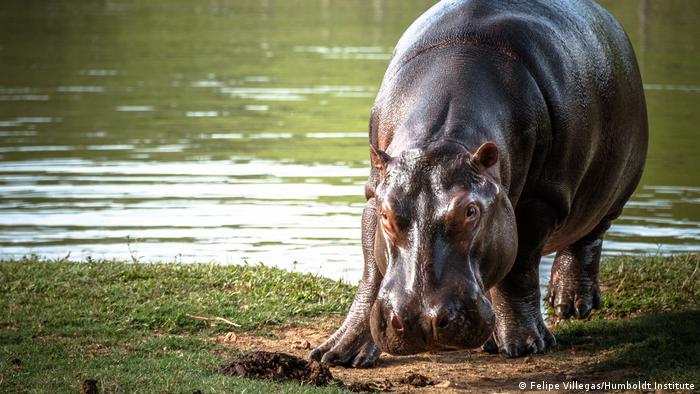 Zoos in Colombia are neither interested in, nor capable of, taking them due to cost

Humans also largely left the hippos alone until the 2000s. But then fishermen began to complain of aggressive hippos preventing them from accessing the river. Valderrama says reports of hippos attacking humans and boats and even killing cattle sowed panic in local communities.

And it's not just the hippos' human neighbors that are finding them difficult to live with. Jonathan Shurin, a biologist at the University of California San Diego, who worked on a recent study into the hippo's environmental impact, said their poop is essentially over-fertilizing rivers.

"There is an overload of organic matter and a huge abundance of bacteria consuming that," Shurin told DW, "and then those bacteria can drive the oxygen levels really low and cause fish mortality and [damaging] algae blooms."

It is too early to conclude if that will have a negative impact on local species such as the manatee, but Shurin predicts the effects will only worsen as hippos continue to multiply and expand their range, with algae blooms potentially harming fish and to human health.

If nothing is done, hippo numbers will "rise exponentially" Shurin says. The solutions to the problem might not be very pleasant, but that's all the more reason to act sooner rather than later, he argues. "It's more humane to do what you're going to do to 80 animals than to a thousand."

Still, just what to do exactly, remains a live debate. 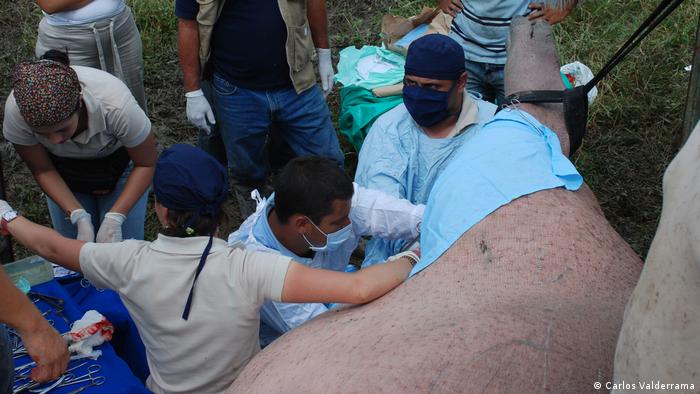 "We have been able to control population growth a little," CORNARE biologist David Echeverri told DW. "However, it has not been enough, due to the problems hippos represent as a species; they are aggressive, territorial and spend a lot of time in the water so are hard to monitor. This all makes implementing control measures difficult, expensive and dangerous."

CORNARE has managed to sterilize 10 of the younger and thus smaller animals over the last decade. But, as Valderrama's operation demonstrated, it's far from a simple or cheap option. Nor is it easy on the patient.

Read more: Crocodiles in Belize: The fierce animals in need of protection

Tranquilizing a huge, aggressive animal is fraught with risk. Their tough skin is hard to pierce and the longer they are under anesthetic, the greater the threat to the hippo's life. And that's if you can get near enough in the first place.

Zoos are neither interested in, nor capable of, taking them due to cost, capacity and paperwork, and they cannot be relocated to Africa due to potential disease risk.

This leaves the option of a straightforward cull. But while eradicating the animals might be technically possible, it would be costly and controversial. When an army-backed operation euthanized an aggressive male hippo in 2009, there was a huge public backlash. "Everyone thinks hippos are chubby, nice, cute," Valderrama said. "They think of [Gloria] in the Madagascar movies."

Local ranchers, though, aren't such fans, and increasingly complaining of the animals damaging fences and disturbing cattle.

Echeverri would rather the hippos were contained in an enclosed reserve and more effective birth control developed. But he says that is only likely to happen with international funding, and not any time soon — particularly now the country is on lockdown due to the COVID-19 pandemic.

In the meantime, Escobar's escapees are free to roam and breed, well, like, hippos.

When young Colombian activists won a historic lawsuit against their government, they thought the rainforest was saved. A year later, they're piling on the pressure to see their leaders act on the ruling. (18.07.2019)

The Misak community in western Colombia wants to preserve its ancestors' traditions and horticultural knowledge while responding to ongoing deforestation in the region. (24.03.2020)