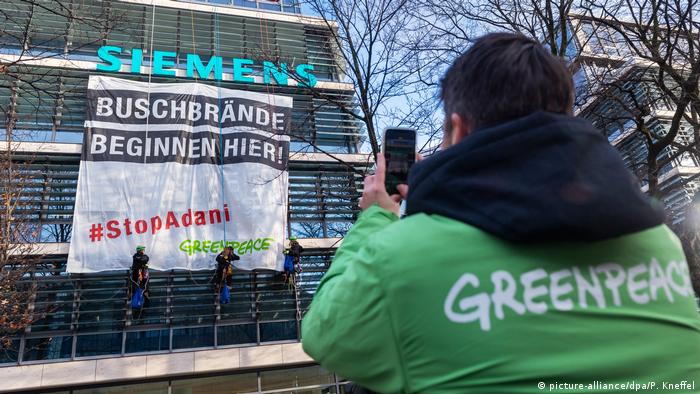 Some 300 activists gathered outside the Olympiahalle building in Munich on Wednesday to protest a board meeting of German industrial giant Siemens.

Protesters have taken issue with Siemens' pariticipation in a planned coal mine in Australia, which will be run by the Indian energy firm Adani.

Scientists have said that Australia's reliance on coal has contributed not only to the global impact of climate change but also, more locally, contributed to the strength of the devastating bushfires that ravaged the country, killing dozens of people and hundreds of millions of animals.

Sydney-based Fridays for Future school striker Varsha Yajman was also in attendance, as was a representative of the Wangan and Jagalingou Family Council, an indigenous Australian group that has been protesting the Adani mine for years.

In the early morning ahead of the shareholder meeting, about 100 protesters formed a human chain in front of the Olympiahalle.

Siemens CEO Joe Kaeser lamented in his remarks that the company was the target of "agitation" and that "those who persist in rejecting dialogue and cooperation on solutions lose the moral right to discredit" companies and leaders who are taking climate action."

He added the caveat, however, that the firm "did not see the whole picture correctly and in time" when agreeing to suppy equipment to the Adani mine.

Earlier on Wednesday, Kaeser called the protests "grostesque," saying that Siemens' role in the Adani project was "irrelevant."

Siemens is to build the site's rail-signaling infrastructure under a deal worth €18 million (US$19.9 million).

In mid-January, Kaeser met with German Fridays for Future leader Luisa Neubauer about activists' concerns, but later announced the company would go forward with the project the next morning.

The demonstration was organized by the German branches of the Fridays for Future and Extinction Rebellion movements.

The German engineering firm has reaffirmed plans to support the controversial Adani coal mine project. Siemens has come under fire for the project's climate implications, with bushfires currently raging across Australia. (13.01.2020)