You wouldn't typically expect heavy rainfall and frost in East Africa. But the Earth's climate is changing - and this is affecting one of the world's largest tea-producing regions, in central Kenya. 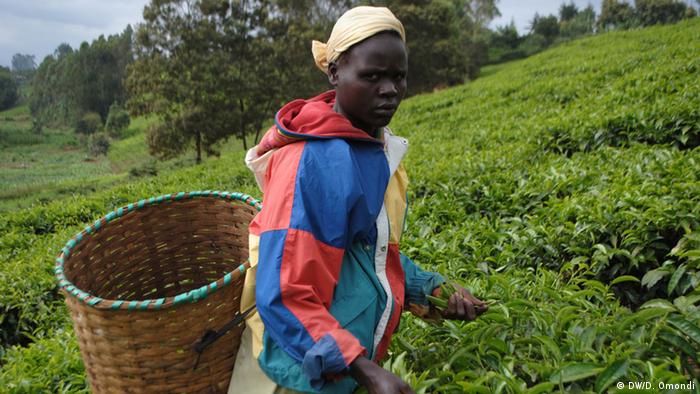 For Joseph Mwangi and his wife, picking tea early in the morning has become more difficult lately. "We have been experiencing frost on the leaves," Mwangi says. "This makes it hard to work, because the frost stings our hands," he added.

Mwangi and his wife Alice Muthoni (pictured above) earn their living as tea-pickers in Makomboki, central Kenya. Due to the frost, they have had to start picking tea leaves two hours later. But this presents new problems to the couple.

"When I start working late, I only manage to pick 40 kilograms of tea leaves a day, as compared to 70 kilograms in the past," Muthoni says. "This reduces my pay for the day," she points out. To earn $1, she has to pick 10 kilograms (22 pounds) of tea leaves.

The tea that the couple picks is delivered to the Makomboki Tea Factory. Evans Muchiri, a production manager at the factory, says that due to weather changes, they have recorded a 16 percent drop in tea harvested so far in 2015, compared with 2014. 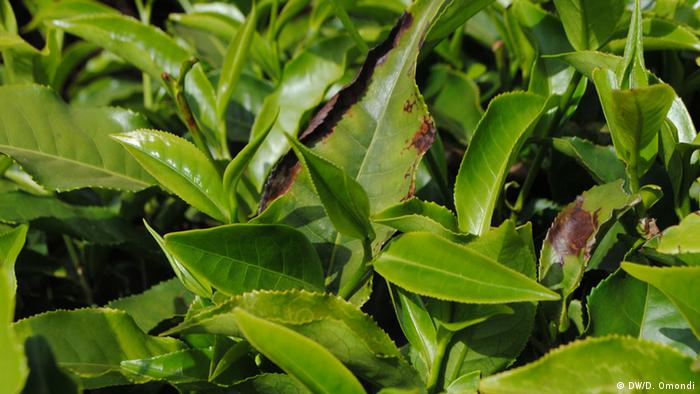 Frost damages the tea leaves, making them unsuitable for harvest

In 2013, tea farming contributed up to $1.3 billion (1.2 billion euros) to the national economy, while more than half a million smallholder farmers depend on the cash crop for income.

Tea grows best in mountainous regions, so Makomboki - at an altitude of just more than 2,000 meters (6,600 feet) - used to provide good conditions. But tea also requires temperatures of 16 to 29 degrees Celsius (60 to 84 degrees Fahrenheit), along with stable rainfall - and this has become increasingly unreliable in recent years.

A study by the Kenya's Tea Research Institute indicates that in 2012, the worst year recorded, almost one-third of the harvest was lost.

"Climate change is already having a negative impact on the lives of tea farmers in Africa," says Alexander Kasterine, who heads the Trade and Environment Unit at the International Trade Centre (ITC). 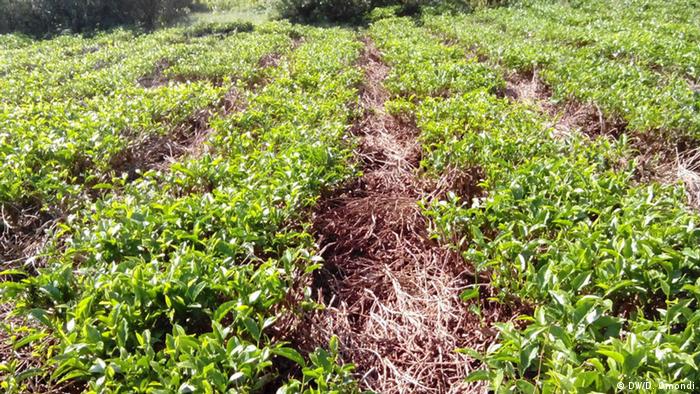 The Ethical Tea Partnership (ETP) - a not-for-profit organization that works toward making the tea industry more sustainable - says climate change is expected to reduce the land suitable for tea production in tea-growing areas 40 percent by 2050.

To enhance the tea farmers' livelihoods, ETP created a partnership with ITC and other nongovernmental organizations, and founded a project to help farmers mitigate and adapt to climate change effects.

Among other things, the program trains farmers and tea factory managers in both carbon standards compliance and adaptation to climate change.

One of the partners is Makomboki Tea Factory. Farmers here are trained on conservation and management of water, including drip irrigation and soil conservation. They use biogas instead of wood, reducing carbon emissions.

"We are encouraging farmers to plant trees and mulch their crops," says Joseph Gitau, an assistant at Makomboki Tea Factory. The Rainforest Alliance then issues certificates to participants upon completion.

Gitau explains that planting trees at tea farms helps in reducing the effects of frost on the tea leaves. It's quite simple: The frosts falls on the tree leaves instead of the tea leaves. Meanwhile, mulching improves soil fertility, preventing soil erosion and frost at the roots. 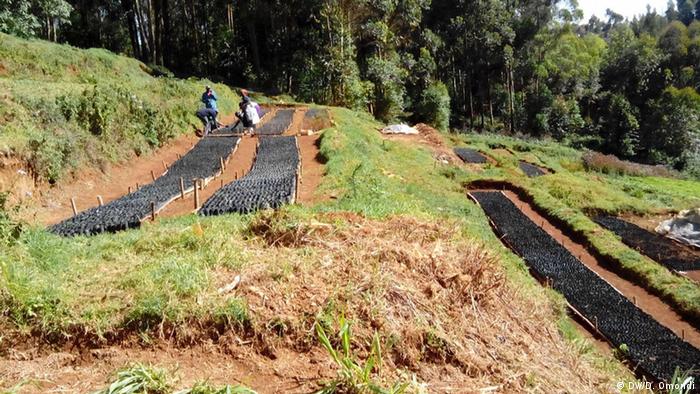 The Makomboki factory is not only trying to adapt to climate change, but also to mitigate it. Earlier on, the factory had been using 2,000 cubic meters (2,600 cubic yards) of wood per month as fuel for drying tea, contributing to regional deforestation.

But now, the factory has switched to alternative energy sources. "We use sawdust, rice husks, biomass, and macadamia and cashew nut shells, as well as briquettes made from sawdust and rice husk," says Evans Muchiri.

The new initiative has saved more than 30,000 trees, while lowering operational costs of the factory by 20 percent.

And as the factory comes up other strategies to adjust to changing climatic conditions, this not only helps the environment and the agriculture sector at large: It also makes the lives of tea-pickers like Jospeh Mwangi and his wife Alice Muthoni a lot easier, right away.

The Turkana people have persevered in an arid landscape, but weather in this region in Kenya’s Northwest is getting ever more erratic due to climate change, putting the Turkana at risk. (30.10.2015)

A new UN report assesses the collective impact of countries’ plans to combat climate change. With the key Paris climate summit just weeks away, DW asks the experts: how serious is the world about staying cool? (30.10.2015)

A French fruit and vegetable garden has grown a very special crop of apples for the upcoming climate summit in Paris. We unveil the secret of these mini works of art. (20.10.2015)