Clearing Cambodia′s leftover land mines: A dangerous job | Asia | An in-depth look at news from across the continent | DW | 30.08.2018

Decades after war and conflict ravaged Cambodia, it is still reeling from millions of land mines. They continue to kill civilians and even de-miners. Nic Dunlop reports from one of the world's largest minefields. 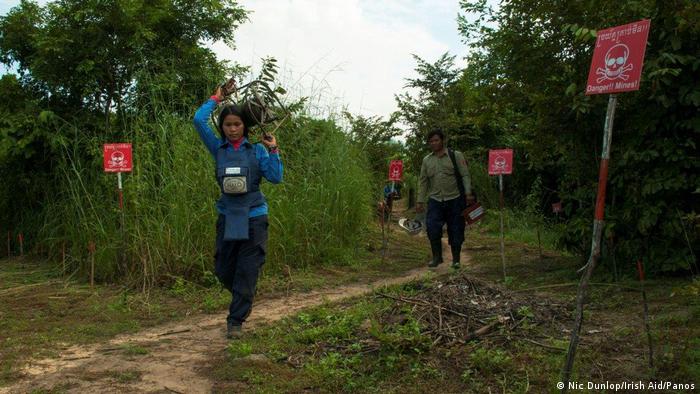 The K-5 barrier minefield in Cambodia is one of the largest minefields in the world. Estimated to contain up to 2 million mines, it runs along the entire length of the Thai-Cambodian border; from Laos in the east to the Gulf of Thailand in the south.

It was on K-5 that Yan Srey Yen was first exposed to the horrors of land mines. The 18-year-old had just completed her training with the UK-based demining organization HALO Trust, when there was a loud explosion.

It was 60-year-old Chhem Se, another de-miner working about 15 meters away. The blast was so strong it broke his helmet apart.

"There was blood all over his face and he'd lost a hand," said Srey Yen. "I was shaking when I came to help."

The medic patched Chhem Se up and he was taken on a stretcher to the evacuation point. He began vomiting blood. He was then flown by helicopter to a hospital where he died several days later.

Chhem Se was an experienced de-miner who had been with HALO for 15 years. He was due to retire within a matter of weeks. A popular member of Srey Yen's team, Chhem's death was a sobering reminder of the deadly work Srey Yen had embarked upon; that even the most experienced de-miners were vulnerable to the devastating impact of mines. "Later, when I learned that he died, I cried," she said. 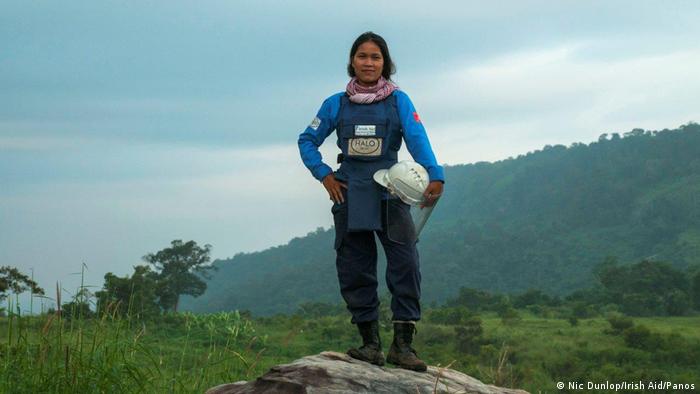 More than 20 years ago, the International Campaign to Ban Landmines was awarded the Nobel Peace Prize. The same year, the Ottawa Treaty was signed, which was a landmark legal framework for states to eliminate land mines worldwide. The campaign, which is comprised of 1,300 organizations, has returned thousands of acres of land to impoverished communities all over the world.

Out of 195 states, 163 have signed the treaty. In Cambodia, where the campaign began, more than 50 percent of minefields have now been cleared and accident rates have plummeted.

Land mines were used by all sides in Cambodia's decades-long war and conflict. In 1978, after the Vietnamese army drove the Khmer Rouge from power, they pushed the guerrillas over the frontier into neighboring Thailand. They then sealed the border with the vast K-5 barrier minefield. Despite the country returning to peace, land mines continue to reap a deadly harvest.

As Cambodia's population increases and land becomes scarce, poor farmers are moving into uncultivated areas, particularly along the border with Thailand. Recently, the Cambodian government began building a road that will run parallel to the frontier alongside the K-5 minefield. And whenever roads are built, more people move in to these areas, exposing them to the dangers of land mines.

In 2006, the HALO Trust began to clear the K-5 minefield. HALO removes land mines and unexploded bombs around the world. They have been operational in Cambodia since 1991. At the time, there were believed to be 10 million land mines in country – or more mines than people. 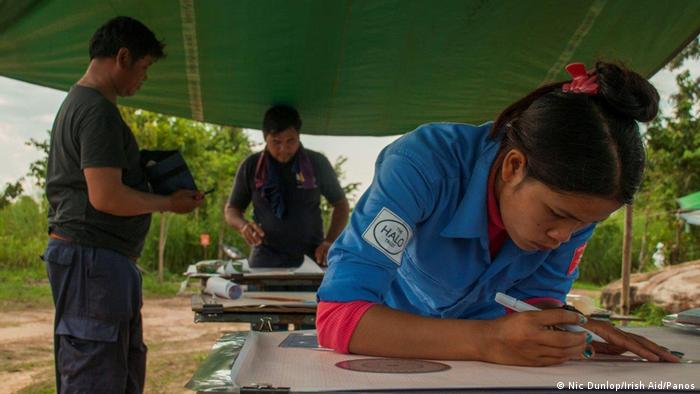 Srey Yen's village, Ou Pok, is less than three kilometers from the K-5 minefield. She joined HALO in 2012 when teams came to her village to recruit de-miners. Like many of her team members, she is from a poor farming family. Before she joined, she dropped out of school to support her parents by selling fish in a market across the border in Thailand.

Although her father was displeased when she joined HALO, it wasn't until she returned to her village with her team that he understood. "He was really proud when I went to clear mines in our village," she said. "Everyone knows me and they talk about how I help them and that makes my father even prouder."

Srey Yen was a toddler when the war in Cambodia came to an end. The mines closest to her house were Chinese Type-69s, laid by the Khmer Rouge. These bounding mines leap into the air when triggered, exploding at chest height, and sending small steel balls at ballistic speed in all directions.

A total of 1,570 mines were found in the area. "I only knew the extent of the problem when we began clearing them," she said. "I became scared when I realized just how close they were."

The concrete result of her team's work is not hard to ascertain. One of her neighbors, Sreng Oun, had a third of his land polluted by these hidden killers. Since the minefields have been cleared, he said, life has improved and people are no longer afraid. "Previously we had about five accidents in the village. After HALO cleared the area, I haven't heard of a single one," he said.

Mine clearance has also made a significant difference economically with some impoverished families doubling their incomes.

Not an ordinary day at work

Today, Srey Yen is working on a stretch of the K-5 that is a stone's throw from the village of Chomka Chek. Her team is funded entirely by Irish Aid. The money goes to fund operational costs like food, fuel, equipment and salaries.

The teams start work in the minefield just after 7 a.m. and continue until midday before going back out until 3 p.m.

They work in heavy protective clothing with helmets and visors often in stifling heat. The work is slow and methodical and discipline is rigidly enforced by 23-year-old Srey. She spends her days watching over her team ensuring they work safely and effectively. A simple mistake can result in serious injury or, as in the case of Chhem Se, death.

In the rare occurrence that an accident occurs, all work is stopped. After the wounded are evacuated, a detailed and rigorous investigation is carried out by HALO staff to ascertain exactly what happened and why. Following strict operating procedures in the minefield is taken extremely seriously. When a mine detonates, finding the cause is paramount to prevent further accidents.

Despite her youth, Srey Yen is clearly driven and leads by example. As a field officer, she oversees a team of nine. "When I see people make mistakes, I tell them straight away. If they don't change their behavior, I report them," she said.

"People on my team say I'm serious and strict during working hours. But when I explain clearly to people, they understand. If they don't listen and don't work hard together, it's difficult for me to manage," she said. "It can save lives."

Members of Srey Yen's team treat her with a respect usually given to someone much older. It's a testament to her leadership capabilities that people look up to her. "She's really strong," said one HALO member. "They don't ignore her, they listen." Srey and a team member remove a mine

Despite the progress that has been made in Cambodia, there are still reports of mine accidents. Increased mechanization of farming creates a hazardous situation. Small tractors operating in fields carrying heavy loads and people are at risk from anti-tank mines.

As an individual, Srey Yen is clearly motivated, and her job is no longer just a way of helping her family. When her parents heard about the accidents they wanted her to stop working. "I refused," she said, adding that the accidents only made her realize how much she wanted to continue. "I know just how important this work is."

When she tells people about her job as a de-miner, she wants them to understand why clearing mines is important. In urban areas, few understand the hazards faced by the poor living in the countryside. And for many Cambodians, the war is little more than a memory.

Srey Yen is clearing mines from a conflict she never experienced. But that doesn't diminish her commitment to the work. "As long as HALO is in Cambodia, I want to work with them," she said.

But as long as there are mines, and people are poor, she said, they'll have no option but to take risks. It has been 20 years since the Campaign to Ban Landmines won the Nobel Peace Prize. Since then, 27 countries have been declared mine-free and 51 million land mines have been destroyed. And the global trade in mines has ended. Yet more than 60 million people still live with the daily fear of land mines and unexploded bombs.

Signatories of the treaty have pledged to clear the world of mines by 2025. Most agree this deadline is unrealistic and unlikely to be achieved without significant additional funding.

"I know that we're trying to finish by 2025," said Srey Yen. "But it will take longer because no one really knows how many mines there are. I want to see that people are safe."

"If I have no job in the future I'd be happy," she said with a smile. "Because that means everyone will be safe."

This report was made possible with support from Irish Aid and the Embassy of Ireland to Vietnam.

Over the past days thousands of Cambodian workers have fled Thailand amid fears of a crackdown on illegal labor. Thailand expert Kim McQuay examines the reasons behind the exodus and the potential economic implications. (16.06.2014)