Cambodia further drifts away from democracy | Asia| An in-depth look at news from across the continent | DW | 30.07.2018

Cambodia further drifts away from democracy

Strongman Hun Sen has won Cambodia's general election, winning 80 percent of votes. The result is likely to turn Cambodia into a one-party state and can have serious consequences for the country. Ate Hoekstra reports. 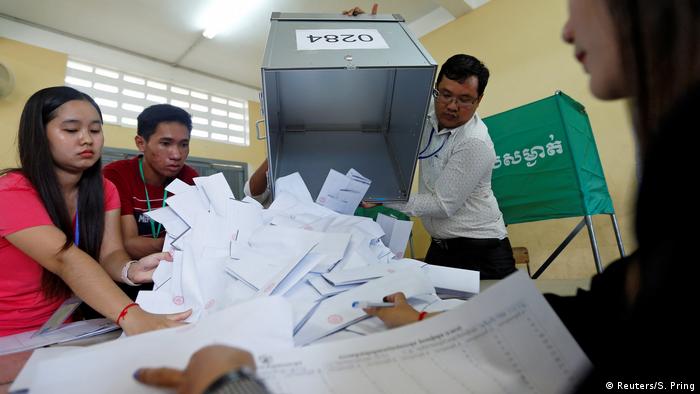 Unofficial results show that PM Hun Sen's Cambodian People's Party (CPP) has won a landslide victory in Sunday's election. The party is expected to secure 125 seats in the country's parliament.

The results could have serious consequences for the Southeast Asian country's politics, economy and its relationship with the international community.

The Sunday vote had already lost legitimacy amid a ban on the opposition Cambodian National Rescue Party (CNRP), the only real competitor to the ruling CPP. Ahead of the election, the government proceeded to crack down on dissent, pressured civic organizations and the independent media.

After the dissolution of the CNRP last year by the Supreme Court, the CPP, which has been in power since 1979, with Hun Sen as prime minister since 1985, had a clear path to victory.

Although Cambodia's National Election Committee said the election has made Cambodian democracy "stronger and stronger," not many people share this view.

"This is by far the worst, least democratic election in the post-UNTAC (United Nations peacekeeping operation in Cambodia) period, because the main opposition party was barred from participating," Phil Robertson, deputy Asia director of Human Rights Watch (HRW), told DW. "This election is looking more like the Soviet-style elections of yesteryear than a genuine democratic contest," he added.

Sochua urged the international community to increase pressure on the government. "Hun Sen has invited sanctions on Cambodia," Sochua said.

International sanctions could severely damage Cambodia's economy, which relies heavily on the export of garment products to the European Union and the United States. Cambodia could also be removed from the Everything But Arms (EBA) scheme, which allows the Southeast Asian country to export its products duty free to EU countries.

Last year, Cambodia's exports to the EU had a value of €5 billion ($5.85 billion), making the 28-nation European bloc one of its main export markets.

In the run-up to the election, the EU had clearly stated that if Cambodia wished to continue to benefit from the EBA, it should respect human rights, fundamental freedoms and labor standards.

Following the election, an EU statement said that it was considering certain actions in the light of a fact-finding mission's report.

The US is also contemplating measures against Hun Sen, the White House announced in a short statement after the election. Last week, the US Congress passed the Cambodia Democracy Act, paving the way for personalized sanctions on Hun Sen, his family members and other government officials.

HRW's Phil Robertson suggested that both the US and the EU should move forward with sanctions. "Only serious international pressure can force PM Hun Sen and the CPP to come to the table to discuss human rights and democratic reforms," he said. 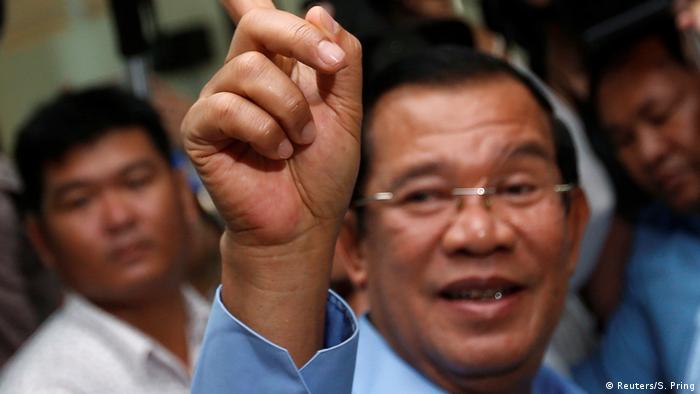 Hun Sen has been Cambodia's prime minister since 1985

Although official results are not expected before mid-August, preliminary results suggest that the 19 opposition parties competing in the election have won only a handful of seats.

Just days before the election, the Grassroots Democratic Party (GDP) had hoped to become Cambodia's new main opposition party, but it failed to win a single seat in parliament.

"We will continue to try to inspire the youth to nurture a new political culture in Cambodia even though it is difficult in this political climate," Sam Inn, a GDP spokesman, told DW.

The CNRP also refuses to give up the fight for democracy. "We will continue to be a party for the majority of the Cambodians," Sochua said.